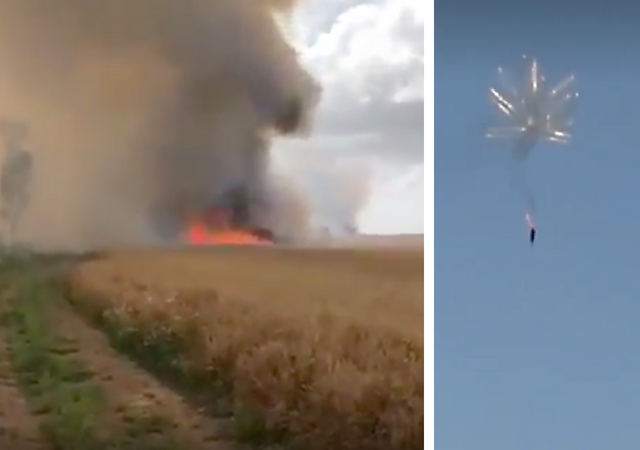 Gazans are using ‘fire balloons’ to decimate portions of Israel, including the country’s nature reserves.

According to the Times of Israel, a “total of at least 17,500 dunams – nearly 7 square miles – of land burned as Palestinians repeatedly send airborne incendiary devices across the border.”

During Gaza’s ‘March of Return‘, fire kites were used to start fires in Israeli fields, but as the Times of Israel reports, “a new arson tactic has been gaining popularity along the Gaza border. Instead of kites, a different children’s toy is being flown into Israel: helium balloons.”

The concept is the same: Launch the airborne incendiary devices into the air and rely on the breeze from the coast to push them into Israeli territory, where they can start a fire.

The balloon tactic has been in use for at least a month and a half, but it has picked up in recent weeks.

In total, approximately 17,500 dunams (4,300 acres, or nearly seven square miles) of land have been burned in more than 250 fires over the past two months, more than half of it in nature reserves, according to initial assessments.

Authorities have yet to determine how many of the fires were started by kites and how many by balloons. “Kite terror” has become a catch-all term for the phenomenon.

As of Monday, there have been no injuries caused by the fires, but the cost of the damage is high and expected to increase, as there’s no sign that Palestinians in Gaza are giving up on the arson tactic.

Sunday, fires swept through the Shokeda Forest, setting swaths of it ablaze. The fires were started by an incendiary kite flown over the border by Gazans.

ynetnews has that story:

Two firefighting crews were called to the scene to battle the raging flames as the phenomenon of flaming kites continues to wreak havoc on Israel’s southern residents, with the IDF as yet unable to provide a comprehensive counter solution. Another fire also broke out at the Re’im parking lot.

The forest is visited each winter by thousands of tourists who flock from around the country to participate in the “Red South” festival.

Despite the effectiveness of the primitive weapon being increasingly employed by terrorists from the Gaza border, the IDF has registered some success in tackling the threat.

On Sunday evening, soldiers managed to foil an attempt to fly a flaming kite into Israeli territory that glided the border on the southern strip, causing it to fall near the security fence. No one was hurt in the incident.

at what point do the Israeli public both civilian and military say ‘if it’s war you want then it is WAR you will get’.

The Israelis need to do some of their own retaliation of ‘a tooth for a tooth’ policy.

1) cut off ALL trade through the Erez and other checkpoints.
2) No more WATER.
3) No more ELECTRICITY.
4) No more HOSPITAL supplies.
5) ….
continue this list.

Wonder what the enviro’s here in the US will have to say about this environmental vandalism?

HA, it’s a trick question, of course they will never say anything at all.

The UN and the West would call that collective punishment, which is a war crime.

It doesn’t look like it would be too difficult to shoot those balloons down so he incendiaries drop into Gaza before crossing the border.

Exactly. It’s cheaper to pay a couple of guys to shoot down the balloons and kites. Why wait for them to enter Israeli territory? After a few fires on their side of the border, the terrorists will end the fire balloon jihad. In the 18th century, the Spaniards used to send fire ships to destroy English ships in port.

Drones with an uzi strapped to the bottom. I’ll bet you could get some 19 year old IDF soldiers who would love to man those consoles and shoot the balloons full of holes.

Please, if the Israelis will bomb targets in Syria because the Iranians flew an unarmed drone into Israeli territory, they can certainly bomb anyone flying a kite or releasing a balloon. If these incendiary devices are falling on Israel, then Israel is allowing it to happen.

How can they see the person in real time, and know in real time that it is an incendiary device and not just a toy? They can’t know that until well after it’s been launched, by which time the person is not there any more.

The only peace Isreal will get is a Victor’s Peace.

I appreciate their demonstrations of Mercy, but there will come a time when Israel can no longer afford such a luxury. Turn the other cheek and extend an open hand and they will shiv you as you help them off the ground.

Eventually Isreal will have to destroy them anyway. Yes it will be horrific, but even worse will be all the time money energy and lives wasted avoiding what you will have to do anyway.

Else, what is the long range policy? Does Israel really expect the Pali’s will be moderated by mercy and charity? Is there some hope Jordan will give them lands and take them in? Im asking in good faith, there is no wrong answer, what alternative to this wasteful trenchwar stalemate is on the table? Because I don’t understand why Isreal accepts this as a new normal.

The answer is sniper fire. Not only at the balloons and kites but at those flying and releasing them. Even if children.

While there is nothing wrong with sniper fire, yet taking Palestinian psychos out one at a time has not been effective. This is war, it should be treated as such. The best solution is relocation from that region of all Palestinians to Iran.

True, but the headlines write themselves.

Once again, the “Palestinians” prove that the only acts they are capable of are engaging in are embittered, counter-productive acts of death and destruction.