Deja Vu all over again for hate-tweeting Prof. after prior U. Illinois refusal to hire.

Steven Salaita, you may recall, was the controversial anti-Israel professor whose hate-tweeting caused the University of Illinois at Urbana-Champaign to decline to hire him for a tenured position. The University asserted that Salaita only had a contingent offer subject to Board approval, and that approval never happened.

Salaita is active in the Boycott Divestments and Sanctions (BDS) movement and literally wrote a handbook for faculty to use to spread BDS within universities. There was rich irony in the person who sought a worldwide boycott of Israeli academics complaining when he allegedly was boycotted for his noxious views which played upon historical anti-Semitic stereotypes:

My feelings on the tweets are not so different from yours. Those who brand them as anti-Semitic are wrong, but those who claim that they are completely devoid of anti-Semitism are not quite right, either. Salaita’s tweets frequently trade in a kind of anti-Zionist rhetoric that summons and sustains millennia of anti-Jewish sentiment hard-wired into Western culture. Nobody should be fooled when people adopt a posture akin to saying, “I am completely opposed to anti-Semitism, but I think Zionists would kill Jesus given half a chance.” There is a certain kind of person who, to paraphrase Marvell, doesn’t break his shins but by stumbling upon a Zionist. Steven Salaita may or may not be such a person; he certainly can tweet like one. But I hasten to add that this is a far cry from inciting imminent lawless action, or spreading hate speech, or any other form of expression that Western democracies have proscribed.

Salaita sued after a storm of protests by a combination of anti-Israel, pro-BDS faculty — as well as some more neutral faculty legitimately concerned about academic freedom and freedom of speech — failed to sway the U. Illinois trustees. The lawsuit eventually settled with Salaita getting a check but no job.

Salaita did end up with a one-year visiting position as Edward Said Chair at the American University of Beirut (AUB), itself a hotbed of anti-Zionist academic activity. Salaita filled a visiting position previously held by Jasbir Puar, who herself recently caused a firestorm of controversy over her lecture at Vassar.

During the year Salaita has continued to author articles about evil Zionist influence at U.S. universities. And to criticize UAB itself: 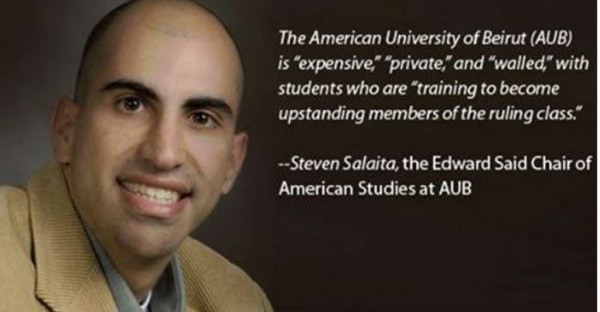 Liel Liebowitz at The Tablet magazine broke the news yesterday that Salaita might be having another employment problem, this time at AUB:

… Salaita’s views, it seems, are too unpalatable even in Lebanon. A petition circulated today and signed by students of the university argues that the official search procedure designed to award Salaita his position was cancelled on March 30 by university president Fadlo Khuri, citing “procedural irregularities.” Which, the petitioners argue, is just code for political persecution. “We fear,” the petition continues, “that AUB is reproducing the trend of persecuting scholars who condemn the injustices committed in Palestine.”

Even if you ignore for one minute the rich irony of this statement—given the absolutely abysmal way Lebanon has treated its sizable Palestinian population, denied access to basic resources like housing, education, and employment for the past six decades—you have to savor the thought of Salaita, who fashioned himself into a martyr wronged by a shady Zionist cabal for criticizing Israel, being now slammed a second time by a university few can accuse of abundant love for the Jewish state.

This is confirmed by Inside Higher Ed:

At AUB, a petition is circulating among students that says that the university’s president, Fadlo Khuri, called off a search for a director of the Center for American Studies and Research when a search committee unanimously recommended Salaita for the job.

“[G]iven Professor Salaita’s recent termination from a tenure-track position at the University of Illinois at Urbana-Champaign for his pro-Palestinian political views, we fear that AUB is reproducing the trend of persecuting scholars who condemn the injustices committed in Palestine,” the petition says. “This breach of academic freedom cannot be allowed at AUB.”

Lisa Hajjar, Edward Said Chair of American Studies at AUB and chair of the search committee for the director’s job, said via email to Inside Higher Ed: “The day after the recommendation of Salaita for the position was discussed at the Faculty of Arts and Sciences Advisory Committee, the dean informed the search committee that the president had canceled the search due to procedural irregularities. It is not clear to me which procedures were allegedly violated. I had been working quietly with AUB faculty to see if we could get a reversal of the cancelation but the situation went public when students made a petition and posted it.”

Salaita’s Facebook page has numerous entries (as of this writing) supporting him in the UAB dispute.

The usual suspects like Salaita supporter Prof. Corey Robin, are alleging a conspiracy:

During the Cold War, leftist scholars purged from American academe at least had the opportunity, sometimes, to start again outside the country. That’s how Moses Finley became Sir Moses Finley, the internationally acclaimed classicist at Cambridge. That’s how Chandler Davis, aka Mr. Natalie Zemon Davis, became an internationally acclaimed mathematician at the University of Toronto. But now it seems as if even that escape route is being denied to Steven Salaita, who was unanimously recommended by a search committee for a position at the American University of Beirut, only to have the university’s president scuttle the search. There’s a petition circulating here; please sign it.

Lisa Duggan, a professor at NYU who led the American Studies Association academic boycott of Israel and uses her faculty position to promote BDS, is on the case circulating the petition. Expect the pro-BDS faculty troops to rally. Maybe they will boycott Lebanese universities over this (don’t hold your breath).

It’s interesting that UAB alleges irregularities in the hiring process.

At U. Illinois there were similar allegations since Salaita was hired by the American Indian Studies Department even though most of his background was in anti-Zionist political writing. (He taught in the English Department at Virginia Tech, his prior employer.) The Chair of the UI-UC American Indian Studies department as well as the co-Chair of the hiring search committee were big BDS supporters. It certainly looked like an inside track to help a fellow anti-Israel faculty member.

We don’t know why Salaita’s Beirut appointment was nixed. Regardless, Jews somehow will blamed for this.

UPDATE: Inside Higher Ed has a statement from UAB expanding on the procedural irregularities in the appointment process, and denying the conspiracy theories:

UPDATE: On Thursday morning, the college shared an email message Khuri sent to the campus, responding to the petition. In the email, Khuri said statements about the search being called off due to Salaita’s views were “wholly untrue” and were “a malicious distortion of the facts involved in this case.”

Khuri went on to say that he acted after university leaders “received several complaints from faculty members alleging conflicts of interest and misconduct” in the search process. “Violations included the presence of visiting faculty with selection and voting rights on the search committee, as well as the presence of lower-ranked faculty members voting for a higher-ranked position. Additionally, there was a conflict implied by the current incumbent chairing a committee to find their own successor.”

As to the charges on academic freedom, Khuri wrote: “There is no truth in the anonymous petition’s suggestion that the search was stopped in order to prevent Dr. Salaita from being selected as CASAR director…. The university strongly supports the principles of academic freedom, freedom of speech and the fair, transparent selection of academic positions based on merit alone and free of any hidden political agenda.”

So basically this was another inside job designed to fast track an anti-Zionist activist.

The irony is so delicious!

Agreed. Somehow, they will blame the “Jews” for this.

The so called “Palestinians” will not be happy with him until he gets one of those “vests” and does the “not-so-smart-bomb” thing.

For which, of course, they will blame the “Jews”. Again.

Personal Opinion :
He is an empty husk devoured by hate from the inside. Nothing human remains.

The so called “Palestinians” will not be happy with him until he gets one of those “vests” and does the “not-so-smart-bomb” thing.

He should probably do some practicing with a real one first on campus….

I understand there are a couple “universities” in Gaza. Perhaps he should apply to one of them.

Someone should try to convince the locals that he’s an Israeli spy.

They thought a pelican and a porpoise were Israeli spies. They might believe Salaita has enough intelligence for the job.

Of course the BDS types take faculty appointments in the English Department, or Native American Studies, or Women’s Studies, etc.

YOU try to fund-raise for the “Department of Anti-Semitism”. It’s not an easy sell, even in Manhattan, Cambridge and San Francisco.

The answer is simple: Salaita is not antisemitic enough for AUB.

“The University asserted that Salaita only had a contingent offer subject to Board approval, and that approval never happened.”

The offer to Salaita was contingent on Board approval. The Board disapproved.

Yes, that’s what the university asserted. He, of course, asserted the opposite. That’s why there was a case, and a settlement.

But nobody disputed that he was owed at least some money, as the university had induced him to leave his previous job and move his family to Chicago, so the amount he got was not outrageous.