“The Quinnipiac poll found that by a margin of 53% to 39%, Virginians want Democrats controlling the House.” 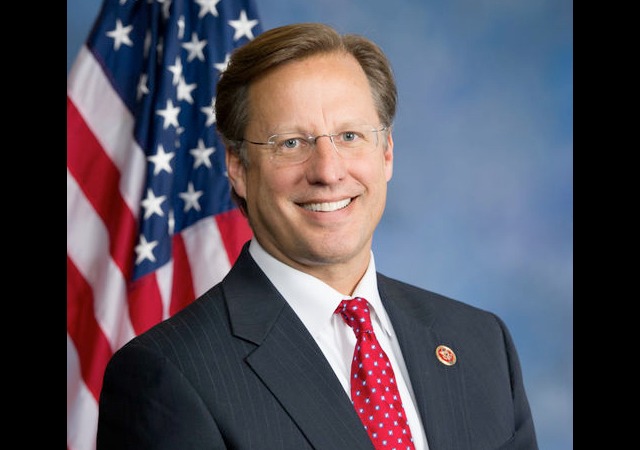 Now Brat appears to have his own troubles as The Cook Political Report changed his Virginia’s 7th District from Lean Republican to Toss-Up.

The courts redrew the 7th District in 2016 and now its “anchored by the professional Richmond suburbs.” Cook Political Report continued:

In June, former undercover CIA operative Abigail Spanberger crushed a well-funded Democratic primary opponent with 73 percent of the vote in an impressive display of grassroots support. Spanberger grew up in Henrico County (the 7th CD) writing a diary in code. As a pragmatic woman with a non-political resume, she could offer a problematic contrast for Brat, a Freedom Caucus member who complained last year about women “in my grill” at town halls.

The top of the ticket could also be a big problem for Brat. Democratic Sen. Tim Kaine is highly popular in the Richmond suburbs, while ultra-conservative GOP Senate nominee Corey Stewart is a highly polarizing figure who lost the 7th CD 61 percent to 33 percent in his primary. In 2017, well-funded GOP gubernatorial nominee Ed Gillespie carried the 7th CD by four points. If Stewart isn’t competitive, Brat could suffer if Republicans stay home.

Spanberger has the support of EMILY’s List along with Governor Ralph Northam and Richmond Mayor Levar Stoney, both Democrats. She also has a strong fundraising ability, pulling in $903,000 in May. While Brat pushed against House leadership before, the NRCC has become active in his re-election campaign. That may not be enough:

The Quinnipiac poll found that by a margin of 53% to 39%, Virginians want Democrats controlling the House. And half of all voters say they are less likely to support a candidate who strongly backs Mr Trump.

Trump took the district by 50% compared to Mitt Romney in 2012, who took it with 56%. But remember, the courts redrew the lines. Brat belongs to the Freedom Caucus and considered “a generally reliable ally of” Trump’s. Despite this he has “avoided talking too much about the president.”

Brat “has shied away from Stewart.” After all, Kaine will likely win the Senate seat and even the Senate Republican caucus decided not to support Stewart. This move might help Brat since I’ve seen many articles around the web about how Stewart is helping the Democrats win in Virginia, especially since he won the GOP primary with a low turnout with only 136,000 votes. From The Economist:

The decline in Mr Stewart’s vote share could portend a drop-off in overall Republican participation. That could mean trouble for Ms Comstock, Mr Brat and Mr Taylor, all of whom represent heavily suburban, increasingly diverse districts where many of Mr Trump’s policies are unpopular.

This includes his administration’s former policy of separating immigrant families at the southern border, which was loudly supported by Mr Stewart, who has complained about illegal immigration since he was a local government official busy with trash removal and sewer systems.

I’ve never heard of the Cook Report. I think redrawing of that district by the courts is the biggest issue. They only redrew it for a reason… the Democrats need help.

For fun, I went to the CR, and scanned through their commentary by headlines only going back to just before Nov 16. They run about 1 out of 4 articles with sobering news on Democrats. The other 3 are how the GOP is in trouble, or Trump is making due, but in trouble, or how nasty things are and we’re in trouble. They also had articles all the way up to Nov 8 on how Hillary was very likely to win… even Texas and NC were polling to flip!

So, keep this is mind.

Charlie Cook has been around for decades. His final prediction for the 2016 presidential election:

However, Congressional districts are much easier to handicap in general than a presidential election. He has been pretty darn accurate with Congressional races except when it comes to the “lean” category. Understandably, that’s where he and everyone else starts to lose accuracy – not completely, but partially. A district re-draw, which has happened in this case, obviously means he does not have the same voters as last time.

Anyone can guess. Some guess better than others. But no one truly knows. That’s why I find these assessments interesting but only to a certain point.

Between Quinnipac and the Cook Report I don’t know which is in the bag for the Democrats more. Their job in life is to give favorable polling results to boost the donations to Democrat candidates.

THAT IS THEIR JOB IN THE DEMOCRAT PARTY! BOOST DONATIONS TO DEMOCRAT DONORS PROMISING VICTORY THIS TIME AND DEPRESS REPUBLICAN VOTERS THAT ALL IS LOST IN JULY!!

ITS OVER REPUBULICANS PACK IT IN!! THE ELECTION IS DONE WE DECLARE IT SO!!! IN JULY BEFORE ANY CAMPAIGNS EVEN RUN!!!

Please quit falling for Democrat pollsters trying to boost enthusiasm for Democrats and depress Republicans enthusiasm. I know our pundit class thinks the only way for Republicans to win is to scare the hell out of them but it just gets old that every two year cycle we get the same predicting from people like the Cook Report and the same scare mongering from Conservative websites quoting them.

I love how bad news indicates the Republicans will lose in November in July but ABSOLUTELY no good news points to Republican victory in July.

The Democrats can’t talk about ABOLISHING ICE and no one blinks an eye that this will result in a Democrat loss but rigged polling from the hardcore Democrats at Cook Report and in New Haven CT where Quinnipac is means Brat will lose this fall even though he won in 2016 with the Democrat turnout for Hillary against him in that district.

I just give up. Websites like LI will never stop badgering us with bad news because they don’t think positive like Trump does about winning. Everything is doom and gloom and the end of the world but the Democrats can make MONSTEROUS errors like talking about abolishing ICE and they will surely survive it and be even stronger.

And when the pollsters are so very wrong yet AGAIN they will simply shrug their shoulders and continue to expect us to believe them and continue to promise to the left they can shape the desired outcome.

There is still a fair amount of time before the elections. Reaction to polls makes sense for fund raisers. But unless the divide grows larger and beyond error margins it’s somewhat irrelevant. The negative pull from Corey Stewart probably endures though.

“The Quinnipiac poll found that by a margin of 53% to 39%, Virginians want Democrats controlling the House.”

Virginia does? Or, the cesspit of government employees, law firms, lobbyists, and other camp followers in the areas adjacent the capitol?

The cesspit is in Virginia. Its denizens are Virginians. And there are enough of them to make VA a D state.

I wonder who they polled and how they did their polling. Never got one in my life after 22+ years living in VA.

Nothing new…..the most populated areas, like in NY and CA, carry the state. Which again points to the wisdom of the Founders, who designed the Senate to be populated by nominees from the STATES’ legislative bodies, not the popular vote. That was changed by the 17th Amendment, to our national shame and apparently slow demise.

As suggested in Mark Levin’s The Liberty Amendments the 17th Amendment should be repealed, much like the 18th (i.e. Prohibition).

Praying for Brat, and for ANY Republican to get Kaine, the Hill-da-beast’s running mate and overall DISASTER, out of the Senate!!

Virginia isn’t voting on this race, just one Congressional District.

A District that voted for both Trump and Romney.

Most of those D votes are up in Communist Country – around DC. Brat’s District is a suburb of Richmond.

So Virginians want anti-Americans controlling the house. How about the voters in the 7th District? Is that 53-39 uniform across the state? Doubt it.

Last Good Politician from Virginia was Washington with a second to Madison before he became under the spell of Jefferson.

Brat is one of the few REAL Repubs in the House. He is brilliant and knows finance. He is also a conservative which in VA might be a handicap. VA is going into the purple/blue sewer faster than a two-gallon flush! I hope Brat wins but look at all of the other R failures in VA in the last two years. Not much hope there.

Brat’s district isn’t only around Richmond. I live in Fredericksburg and I am in his district. Richmond may lean more blue, but where Brat comes from is still very Red.

NORTHERN VIRGINIA may want Dems in congress, the rest of the state doesn’t.