Democratic Socialist Alexandria Ocasio-Cortez caused one of the biggest upsets a few weeks ago when she defeated incumbent Rep. Joe Crowley in the primary.

Everything seemed fine and dandy, but now Ocasio-Cortez has accused the veteran politician of mounting a third party challenge.

.@repjoecrowley stated on live TV that he would absolutely support my candidacy.

Instead, he’s stood me up for all 3 scheduled concession calls.

Now, he’s mounting a 3rd party challenge against me and the Democratic Party- and against the will of @NYWFP.https://t.co/Xvb6Jk8N8q

It seems a portion of a recent New York Times has upset Ocasio-Cortez even though it contains Crowley’s refusal:

To Mr. Lipton’s chagrin, his campaign declined; Mr. Crowley will remain on the ballot in November. “You’d think that given the moment we’re in,” said Mr. Lipton, “that Democratic leaders would want to help progressive forces to unite.”

Asked about Mr. Crowley’s plans regarding the Working Families Party line, a campaign spokeswoman said only: “Joe Crowley is a Democrat. He’s made clear he is not running for Congress and supports the Democratic nominee in NY-14.”

The Times noted that vacating it isn’t that easy:

The Working Families Party must go through a convoluted legal maneuver, essentially nominating the unwanted primary winner for another electoral position on the ballot — often one that he or she has little chance of winning, like a county clerkship in a region of the state dominated by the other party.

“It’s very quirky,” said Jerry H. Goldfeder, an election lawyer and an adjunct professor at Fordham University School of Law. “It demonstrates how the various minor parties sometimes have inordinate control over the way the ballot looks, and that causes confusion in the electorate.”

Yes, Ocasio-Cortez should have concerns when it comes to this because most people stayed home for the primary:

But only about 13 percent of registered Democrats turned out to vote in the 14th Congressional District that takes in parts of Queens and the Bronx, according to a preliminary city Board of Elections tally. 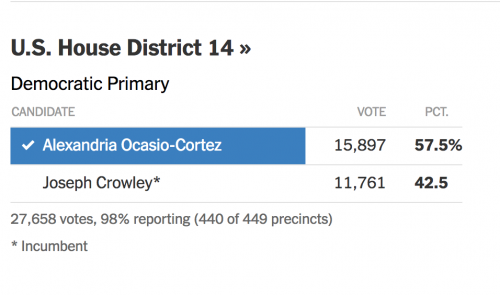 Crowley took to Twitter to remind Ocasio-Cortez that he is not running:

Alexandria, the race is over and Democrats need to come together. I’ve made my support for you clear and the fact that I’m not running. We’ve scheduled phone calls and your team has not followed through. I’d like to connect but I’m not willing to air grievances on Twitter. https://t.co/hxEeWEpI2O

Lots questions about WFP line. Was honored to have their support. I’m not running. For record you can only be removed from the ballot if 1) you move out of NY; 2) die; 3) be convicted of a crime; 4) accept a nomination for another office (in a place I don’t live).

I don’t plan on moving out of New York, have a clean record, hope God’s will is that I don’t die, and won’t commit what I honestly believe to be election fraud. https://t.co/Cxk3s5zALi

When it comes to the phone calls, a Crowley aide told Politico that the missed calls happened “due to hang-ups on her end” and that “she’s doing it to be politically craven.” The aide also said that text messages show “Crowley’s team reached out asking” for her phone number and it took her campaign “hours to respond.”

To top it off, the staffer stated “that Corbin Trent, a spokesman for Ocasio-Cortez’s campaign, called Crowley’s team Thursday to admit the information she blasted out on twitter was ‘a mistake.'”

And an empty skirt.

Fascist beliefs aside, she’s about as qualified to run anything as Beta Barry or his successor-failure, hillary klinton.

“He stated he would absolutely support my candidacy”

You mean, Joe a Democrat lied to you? Put on your shocked, shocked face.

She and Bernie are the true believers of the Party, those who can not be displayed too prominently yet as the Party slides left more and more. Anyway, the Hillary’s of the world will make the back room deals that count. She may be the darling of the Party, but she needs to obey Party internal rules. Whether she rises in the Party will be determined by “hidden” values…maybe not to the level of Senator Harris, but who knows.

Bernie is a ‘believer’ when it pay$.

But how would the dems explain Bernie getting 57% of the popular vote and Hillary 53%, and still losing to Trump?

It seems that Ms. Ocasio-Cortez is quite naive and finding the first go around in her first a major political run for office, is not a hands down winner takes all endeavor. If she is able to stick around in NY State, she’ll find that if you can’t get through the front door..go around back where someone knows someone who knows someone..and uses magic passwords. Not quite Chicago, but a very close 2nd.

A classic instance of party failure. Ocasio-Cortez might have used her victory to expand her reach within the party and made efforts to persuade fence sitters. Expanding bases is what healthy political parties do.

No such luck. Her constituency, it turns out, aren’t voters but the media clack who’ve heaped exaggerated praise and fawning coverage. Given the very low primary turnout, she has left an enormous vacuum for Crowley to stick around.

I love when incumbents get jilted at the political alter.

Nothing gets attention like a story whose actors are ten minutes from the courtier-media enclaves in New Versailles.

Trump will no doubt dub him Creepy Crowley.

She seems like she will fit right in with the Pelosi and Waters crew. She sounds like a whiny child rather than an adult, which might explain her socialist stance. Then again, she could just be that stupid.

She also let all the praises heaped on her go to her head.

Sadly, she will very likely be elected, another “great” representative of the once great state of New York.

Crowley is being disingenuous. Nobody with his experience in politics could honestly believe that nominating yourself for a position you’re very unlikely to win and have no interest in winning is election fraud. After all every Republican he’s ever faced has done exactly that.

Doing so in order to get off the ballot where he doesn’t want to be is the exact equivalent of British MPs getting appointed as Steward of the Chiltern Hundreds (a government job that has no duties and no salary) so as to become ineligible to sit in Parliament.

Wouldn’t it be hilarious if Ms. Ocasio-Cortez’s antics managed to divide the left and a Republican actually won that district? It’s a longshot, but I’m keeping my fingers crossed!

Nah, it’s not even a long shot. Crowley and Ocasio-Cortez between them will get at least 80% of the vote, so even if they were to split that almost evenly between them whoever came out a hair ahead would win.

The left, perhaps. There is a diversity bias in her district, which may better explain the election.

I’m thinking she might have enough bat-shit crazy behind the facade to do it. Just need to sort out the right questions/comments to bring out the whack. maybe when she hits the stage, crank up “America” from West Side Story and ask her about “the Jews” and their cultural appropriation. Yeah, that’ll do it.

“Asked about Mr. Crowley’s plans regarding the Working Families Party line, a campaign spokeswoman said only: “Joe Crowley is a Democrat. He’s made clear he is not running for Congress and supports the Democratic nominee in NY-14.”

This happens to me all the time when I’m not running for Congress. I end up on the ballot as a 3rd party candidate.

There’s a lot more going on here than has been revealed. Watch your back, Cortez, or you may suffer from a case Arkan-cide.

She won her primary based on low turnout. Now that the Dem establishment realizes the threat, I wouldn’t be surprised if she doesn’t lose in the general once the Dem gets a second bite at the apple.

Same thing happened with the commie mayor of NY.

Voters get the country they deserve.

She won her primary based on low turnout.

That is precisely how we’ve got an entire unanimity of blithering leftists on the Seattle City Council. Top-two primary weeds out all Republicans and centrists, voters get disgusted and don’t turn out, then it only takes 16% of voters to ‘win’ for the lefties – and for the citizens to lose, big time.

This woman has all the right stuff to be a Demorat! She has lied about her childhood. She has a campaign manager who hates Jews. She has called for the ouster of Pelosi. She has accused Crowley of lying and reneging on his word. Knowing this I also suspect that there is some voter fraud in her background. What a great addition to the part of the people!

She seems sweet. And she ‘got out the vote’ sort of. I mean, 13% of the Democrat voters turned out for the primary. ROFL!

No Democrat remains on the ballot to challenge another Democrat without the tacit support of the leadership of the Democrat party. It just does not happen. Not even HRC did it when Obama won the 2008 primary. And, Ocasia-Cortez knows this. The Party screwed up by allowing her to win and now it is correcting that mistake. Surprise. Surprise. Surprise.

Remember how Obama came out of nowhere to become the Democrat nominee for President? He was the “required minority on the short list” to virtue signal the party”s commitment to minorities. Then all of a sudden he was fundamentally transforming America for 8 years.

How did that work out for us?

Cortez is youthful attractive Marxist scum. For 40 years the nemesis that keeps reincarnating to destroy this Republic has been Marxism. And they have been gradually taking more and more key terrain (entertainment, academia, sports).

I’ll reserve my laughter till after her head is on a pike.

Although it is amusing to hear a 3rd party politician whine about the incumbent running a 3rd party campaign against her.

The way this plays out is that Joe calls the Republican candidate and makes an offer he/she cannot refuse. The Republican lays low, stays home and does not campaign Whisper campaign begins within Republican ranks to vote for Joe to prevent a nut job commie from representing the district. I will bet on Joe staying in DC representing the 23rd. The little commie is already panicking.

It makes absolutely no difference what the Republican does. He was always going to lie low, stay home, and not campaign, because there’s no point. Anything he did would be ignored anyway. There are no significant Republican ranks. The few stalwarts who vote R or C will vote R or C regardless, but even if they could all be persuaded to vote for Crowley instead there aren’t enough of them to help him.

The Democrats get a single fresh face amongst their ranks and that’s all you see in the media. The Republicans have more than you can count and you never see any of them. Why is that?

It’s quite possible they’re leaving Crowley on the General ticket and ginning up this dispute to split the republican vote. “If we join the Crowley votes we can defeat this socialist.” It’s a ruse.

No, it’s not possible. There is no Republican vote in the district worth worrying about.

I wonder how many times Hillarity said that in 2016. Oops!

A conservative is a democrat who has been mugged, and she looks just like the type to pull a gun at a moment’s notice.