Still has not answered questions as to what he knew, and when he knew it, about his foundation’s funding of the worst-of-the-worst anti-Israel groups 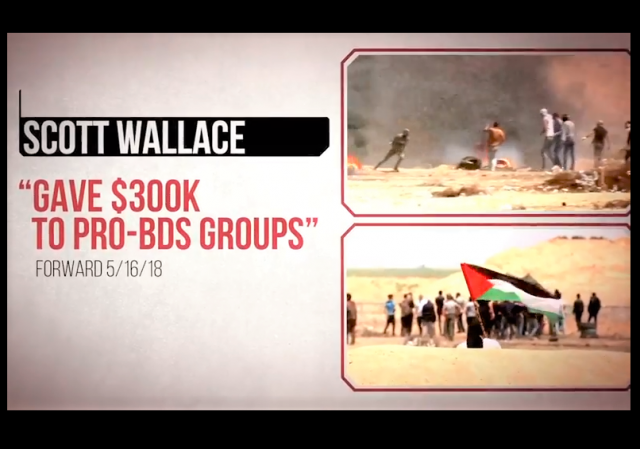 The issue of whether partisan redistricting violates the U.S. Constitution remains an open question, despite recent SCOTUS decisions. But since the PA Sup Ct decided the case based on the PA Constitution, the attempt to get SCOTUS to review the case failed.

The result of the judicially-imposed new districts was expected to be a pick up for Democrats of possibly 3-4 seats. One of those seats was PA-01 centered in Bucks County.

Scott Wallace, heir to a massive fortune, appeared to have it all — money and progressive credentials.

But then, right after the primary, a bombshell landed on the Wallace campaign in the form of an investigative report at The Forward documenting how Wallace’s foundation funded the anti-Israel BDS movement, Dem Scott Wallace (#PA01) foundation funded worst-of-the-worst anti-Israel pro-BDS groups.

As explained in our post, Wallace claimed he was unaware and blamed some unnamed other person in the foundation. Wallace’s campaign, however, has never responded to our inquiries as to what Wallace knew, and when he knew it. That’s important, because Wallace’s foundation funded the worst-of-the-worst BDS groups, as I explained in that original post:

You may not have heard of Haymarket Books, but it’s a crucial player in the national BDS movement. That Wallace’s foundation knew to fund Haymarket and its parent entity shows a level of planning sophistication and understanding as to how money is moved around among anti-Israel activists.

Haymarket is the publishing arm of the Center for Economic and Social Research (CERSC), the 501(c)3 arm of the International Socialist Organization (ISO), a ‘revolutionary socialist’ organization. CERSC’s other activities include publishing the International Socialist Review (ISR), sponsorship of the annual “Socialism Conference”, and hosting and publishing the vehemently anti-Israel blog, Mondoweiss.

Named after the Haymarket Affair of 1886, a defining moment in the history and mythology of the labor movement (May Day is sometimes said to commemorate it), Haymarket’s very first book, in 2002, was not concerned with labor rights, rather it was titled The Struggle for Palestine, a collection edited by ISO veteran Lance Selfa.

Palestinian activism has been a central motif in Haymarket’s repertoire ever since. Perusing Haymarket’s category on ‘Palestine’, one finds many books, some of which have achieved canonical status in the Palestinian nationalist, anti-Israel, Boycott Divestment and Sanctions(BDS) movement. Authors include: Angela Davis, Steven Salaita, Ali Abunimah, Omar Barghouri, and the obligatory titles by Noam Chomsky and Ilan Pappe. Titles range from the dreary and unimaginative: “Boycott, Divestment, Sanction: The Struggle for Palestinian Rights”, “Against Apartheid” and “Apartheid Israel” to the more romantic “Midnight on the Mavi Marmara”. Also among the titles is Jewish Voice for Peace’s latest tract, On Antisemitism,whose primary subjects seem to be ‘Islamophobia’, ‘Palestinian Solidarity’, and ‘Resistance’ to our 45th President, and whose main concern with antisemitism is to absolve all attacks on Jews or Jewish causes as ‘not-antisemitic’ and to focus instead on ‘Palestinian Resistance’. Noteworthy as well are Ali Abunimah’s The Battle for Justice in Palestine and Steven Salaita’s Uncivil Rites: Palestine and the Limits of Academic Freedom.

Other titles include numerous Marxists texts, texts on Black Politics, and a treatise on Mansplaining (recently featured in the NY Times). A particular penchant at Haymarket is for the recent politicization of sports, contracting several books by the Nation’s David Zirin, and recently announced a book with Seattle Seahawks Defensive End, Michael Bennett, titled “How to Make White People Uncomfortable”.

After that bombshell dropped, Wallace’s campaign started to have real problems even within Democratic circles, Jewish Democratic group won’t back BDS-funder Dem nominee Scott Wallace (#PA01) [Note: Apparently the group eventually changed its mind and now will back Wallace.]

The BDS problem wasn’t Wallace’s only problem. He also had questionable ties to the district.

The cumulative effect is that a district that once held the promise of being a Democrat pick up, and was considered a toss-up, now has been moved to the “Leans Republican” category by Cook Political Report:

In February, the Pennsylvania Supreme Court dealt freshman GOP Rep. Brian Fitzpatrick (PA-01) a small setback when it drew the Lansdale area into his Bucks County seat, making it one point less Republican. But Fitzpatrick may have received an even bigger gift when multi-millionaire attorney and philanthropist Scott Wallace won the Democratic primary in May. Wallace has the ability to self-fund but may have problems money can’t solve.

This Bucks County seat is a true swing district: it voted for Hillary Clinton 49 percent to 47 percent in 2016. It’s the kind of seat that should be atop Democrats’ target list in a wave. But Bucks also has a strong local identity, and the Fitzpatrick family has succeeded in building a strong, moderate brand (Fitzpatrick was just endorsed by Gabby Giffords and the AFL-CIO). It’s also the kind of place where Wallace’s wealth, elite pedigree and out-of-state addresses could backfire.

Wallace is the grandson of former FDR Vice President Henry Wallace. He grew up in Bucks County, and his bio video notes he grew up “flipping burgers” there. But he hasn’t lived there for decades, and until recently he was a registered lobbyist for non-profits who lived in Maryland. His Maryland homestead exemption claim and his ties to exclusive South African country clubs are ready-made for attack ads geared towards Bucks’s parochial, blue-collar electorate.

Until recently, Wallace ran his family philanthropy, the Wallace Global Fund, which lists $140 million in assets and supports environmental causes and women’s reproductive rights. In a 2016 blog post entitled “Why I am a Patriotic Millionaire,” Wallace explains that he split his time between the DC area and South Africa, where he fought corporate influence and nurtured a young democracy. In the post, he’s pictured on an expedition to Antarctica….

…. Wallace’s general election efforts have gotten off to a very rocky start. The day after the primary, the Forward published a piece documenting that the Wallace Global Fund gave $300,000 to groups supporting the BDS (Boycott, Divest, Sanction) movement against Israel. Wallace says he didn’t control the expenditures and disavows BDS, but it took a month for one local Jewish Democratic group to reinstate its support for him.

On June 21, the Republican Jewish coalition began running a brutal ad attacking Wallace for owning “mansions in Maryland and South Africa” and “donating $300,000 to anti-Semitic organizations that promote boycotting Israel.” The final tag line? “At home in South Africa, too radical for us.” The ad forced Wallace to respond with an almost unheard-of June damage-control ad noting that he “lives in the house he was born in” and is a “strong supporter of Israel.”

…. But even in waves, candidates still matter, and there’s a wide path for Fitzpatrick and Republicans to disqualify Wallace as out of touch. The race moves from Toss Up to the Lean Republican column.

This appears to be the Republican Jewish Coalition ad mentioned by Cook:

Certainly, the race is not over. But until Wallace answers the questions about what he knew and when he knew it, the BDS issue will continue to haunt him.

Unless, as I suspect, answering those questions would be even more damaging.

I wonder how many sq ft that ‘house I was born in’ has?

They keep saying ‘even in waves’ as if the blue wave is just a proven fact and inarguable.

This Bucks County seat is a true swing district: it voted for Hillary Clinton 49 percent to 47 percent in 2016. It’s the kind of seat that should be atop Democrats’ target list in a wave.

rdm, agree. If a district Hillary won with a margin that basically mirrors her popular vote is ‘atop the Dem’s target list’ they are hurting.

these ;librulers’ need to be questioned about FGM, BoyToys, Polygamy, child marriages – you know – all the human wrongs they support.
let us not forget sharia for all…

Child marriages?? That’s a new one. And what’s FGM?

Child ( married to an adult ) marriages are Islamic. Strongly promoted by Islam. A pedophiles paradise.

FGM —> so females can NOT enjoy sex and thus not tempted to be with many men – or can be used as PROs, with no attachments.

The Librule also needs to be asked about SS St. Louis.
https://en.wikipedia.org/wiki/MS_St._Louis

Reminds me of Kerry’s ‘04 campaign. He had over thirty years to make amends with veterans that he defamed during his fake news Winter Soldier testimony. Never did so. He then runs for president and is suddenly shocked at being swift boated.

Wallace is in the same boat. Must’ve confused the districts’s voters with the grant recipients from his foundation.

Smug. Unwise. Entitled. It’s what a failed elite looks like.

4th AD: The Boston Globe has Kerry’s back, just as it covered for the Kennedys for decades. It’s now doing the same for Fauxcahontas.

Musta been Bush’s “1000 points of light” comment that finally caught on.

Yeah, that’s what did it.