Wallace campaign still won’t answer my questions as to what Wallace knew, and when he knew it, about his foundation’s funding of the worst-of-the-worst anti-Israel groups. 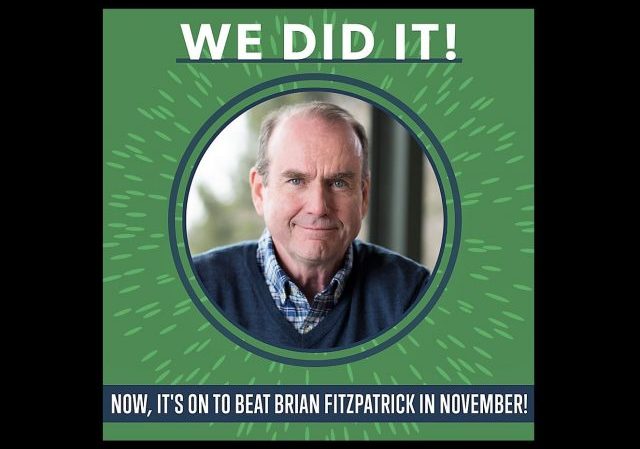 Scott Wallace is the progressive Democratic nominee in the 1st Congressional District in Pennsylvania, running against Brian Fitzpatrick in the newly created district. Fitzpatrick is the current Representative in the soon-to-be extinct 8th District, which disappeared as part of judicially-ordered redistricting.

Wallace’s foundation, the Wallace Global Fund, was a funder of some of the worst anti-Israel and BDS (Boycott, Divestment and Sanctions) groups, including Code Pink, Jewish Voice for Peace, Haymarket Books, and Linda Sarsour’s group.

The funding of Haymarket Books was particularly troubling, as I pointed out in my post, Dem Scott Wallace (#PA01) foundation funded worst-of-the-worst anti-Israel pro-BDS groups:

You may not have heard of Haymarket Books, but it’s a crucial player in the national BDS movement. That Wallace’s foundation knew to fund Haymarket and its parent entity shows a level of planning sophistication and understanding as to how money is moved around among anti-Israel activists….

Wallace’s campaign failed to respond to my inquiries as to what Wallace knew, and when he knew it, instead holding fast on the claim that the BDS funding was by another person at the foundation. In connection with the prior post, I emailed questions to Eric Nagy, Wallace’s campaign manager:

I saw the article in the Forward and also the campaign statement about the funding of BDS and anti-Israel groups. I’m writing about this and was hoping you could respond to the following specific questions:

Was Mr. Wallace aware of the grants to any (or all) of the groups listed in the Forward article? If so, which groups was he aware or and which was he not aware of?

Did Mr. Wallace object to or take any steps to try to prevent the funding of the groups listed in the Forward article? If so, please specify what Mr. Wallace did in that regard.

The campaign statement says the grants in question were made by someone in leadership from a fund over which other leadership “did not exercise authority over”. Who was that other person in leadership who directed the funds to the groups listed in the Forward article? Did Mr. Wallace have any input of any nature as to how those discretionary funds were spent, even if he didn’t technically have “authority” over the funds?

If you could respond asap, that would be appreciated, as I may write about this in the next few hours.

As of this writing, despite a second request last night, there has been no response to these questions.

The lack of transparency brings into question the credibility of Wallace’s defense that it was someone else’s fault. It was his foundation, and he was in charge of running it. Either Wallace knew, in which case he actively supported BDS groups, or he didn’t know, in which case he negligently ran the foundation. Either way, it’s a problem.

The BDS funding is hurting Wallace. A Jewish Democratic outreach group is refusing to back Wallace, the first time the group has failed to back a Democrat:

The lack of endorsement for a Democratic candidate in Pennsylvania is a first for DJOP, Zipin said.

In the wake of news that Wallace, 66, served as co-chair of a family-operated fund that was revealed to have endorsed organizations that were supportive of the boycott, divestment and sanctions (BDS) movement against Israel, DJOP members met with Wallace in late May.

“His answers to our questions, while honest, did not answer or quell any of our concerns that we may have had,” Zipin said.

Wallace maintained his support for Israel in a written statement.

“I am totally committed to the safety and security of Israel, from all threats in the region and from misguided pressure tactics like the BDS movement,” Wallace wrote. “I welcome the support of any organization that shares these values. I know that I may have to work hard to earn their trust, but I’m committed to doing so. I have had many positive and informative meetings with local leaders of the pro-Israel community, and I look forward to continuing that dialogue.”

Predictably, DJOP will not endorse the Republican incumbent, Fitzpatrick, 44, who has held office since 2017 and won election after his brother, Michael, declined to seek reelection for the former 8th Congressional District seat.

Setback for Ds in suburban Philly: Jewish Dem group won’t back Wallace in #PA01 over his group’s pro-BDS donations. https://t.co/3Z6ylwWsWw

Wallace’s BDS problem could make a difference, since the race is close among likely voters in a recent Monmouth poll:

The race for House of Representatives in Pennsylvania’s newly drawn 1st congressional district is shaping up to be a close contest, according to the Monmouth University Poll. Republican incumbent Brian Fitzpatrick is well liked and holds a 7 point lead among all potential voters, but Democratic voter enthusiasm suggests that this could be a very tight race with only a one point gap separating him from challenger Scott Wallace among likely voters.

Fitzpatrick holds a 49% to 42% lead over Wallace among all potential voters – that is voters who have participated in an election since 2010 or have newly registered to vote (a group that represents about 80% of all registered voters in the district). White voters without a college degree back Fitzpatrick by a sizable 59% to 33% margin whereas those who hold a college degree prefer Wallace by 50% to 43%. Black, Asian, and Latino voters back Wallace by 51% to 32%.

The race is much tighter using two different likely voter models. A historical midterm model gives Fitzpatrick a negligible 48% to 47% lead, while a model that includes a turnout surge in areas where Pres. Donald Trump is unpopular gives an insignificant edge to Wallace at 48% to 47%.

A key difference between the likely electorate and the larger pool of potential voters is greater Democratic enthusiasm…. 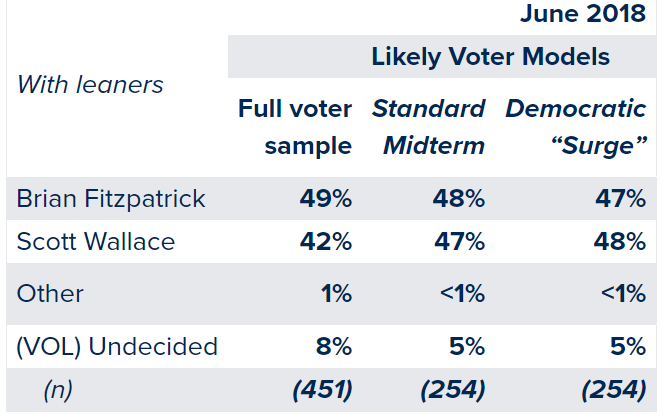 This is a swing district where key voting counties are relatively favorable to Trump.

We will continue to try to find out what Scott Wallace knew about his foundation’s funding of BDS, and when he knew it.

Maybe not sunlight yet, but definitely a trouble light. Good job, and good luck.

A “Jewish Democrat” group standing up for Israel?! I must start planning for the imminent arrival of the Messiah.