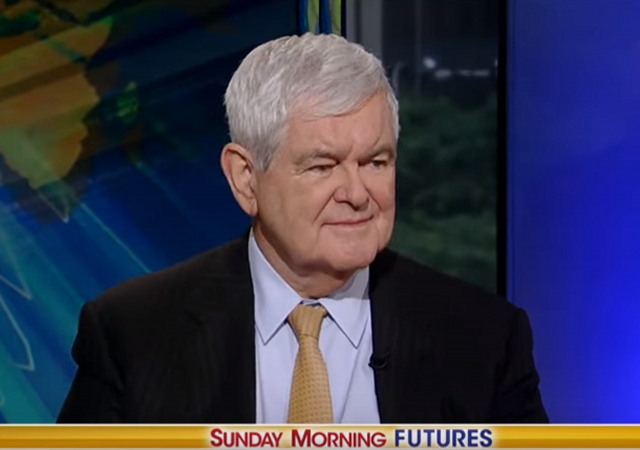 For months, Democrats and their media allies have been talking about a blue wave coming in the midterms this fall. However, Democrats squandered their lead on the generic ballot and the ground is shifting under the left’s feet. Newt Gingrich suggests that the blue wave is turning red.

He explained his position during an appearance on the FOX Business Network. Here’s a partial transcript via Real Clear Politics:

Newt Gingrich: I Predict We’re “Closer To A Red Wave Than A Blue Wave” This Fall

I actually believe we are closer to a red wave than a blue wave. Now, back in December, frankly, I was concerned, because of the huge generic gap. We had not yet passed the tax cuts. Things didn’t feel right. People were upset it had been a year and not much had been accomplished.

Starting with passing the tax cuts, President Trump has done consistently well on conservative judges, deregulation, trade negotiations, what he has done with North Korea. People have a sense things are moving in the right direction. As a result, I don’t know anybody who is a serious student who believes the Democrats have any hope of winning the Senate. In fact, we are likely to gain seats.

Menendez in New Jersey is in trouble, with his scandals. We’re likely to pick up Florida because Gov. Scott is a very strong candidate. Then you add in the other Trump states, West Virginia, North Dakota, Indiana, Missouri/ We’re likely to end up somewhere +5 or +6 in the Senate. How can you talk about a blue wave when we’re picking up votes?

We have a chance to do surp[risingly well in the House, it maybe could be the third time in a century that a presidential party actually gains seats in an off-year election.

I would predict we are closer to a red wave than a blue wave in the fall campaign.

In a new column at National Review, Ben Shapiro breaks down the mistakes made by Democrats:

Are Democrats Blowing It?

In 2016, congressional Democrats were given a gift: the election of Donald Trump. Trump’s approval ratings had never crossed 51 percent; they’d consistently hovered in the low 40s. His personal popularity had always been low, and he had an obvious penchant for jumping on political land mines with both feet. All Democrats had to do was sound reasonable, and they’d probably take back the House of Representatives in sweeping fashion.

The latest polls show that the generic ballot lead for Democrats has dropped from a nearly insurmountable 13 points in December to about three points today. According to a new CBS News/YouGov tracking poll, the odds on a Democratic House takeover are now about 50/50. On average since 1865, the party in power has lost 32 House seats and two Senate seats in midterm elections; Democrats need just 24 seats to flip the House this year. Yet they’re still falling short.

Because Democrats can’t hem themselves in on two topics: Trump and policy.

Republicans can take none of this for granted. The far left is motivated and will likely turn out stronger than they did in the last two midterms.

This is hopeful and a time there was when if you’d told me that one day I’d be hopeful about Republican electoral gains, I’d have shrieked with laughter.

There’s more to Mitch McConnell cancelling the August recess than meets the eye. There are several vulnerable Dem Senators who really needed to go home and do a little campaigning.

And McConnell is keeping them in D.C. so they can’t.

I don’t think the left can hide their antisocial looniness long enough to scam another election.

Yeah, sure, whatever Dem say…whatever…..

And Hillary’s gonna win the next Miss America Pageant too!

If you factor out Hollywood, the msm, university loons and the elite in the big cities, who is there left to vote for the radical people running as Demorats? Ok, the blacks but that is about it. What is there appeal? All they have is anti-Trump and that is not a policy that leads anywhere. Jobs are up, pay is climbing, housing is booming, what exactly do the Dems have to offer?

Early on, dems were thinking that “Beto!!!!” might take Cruz, and that Texas could “go purple”. Now it’s looking like the Dem nominee for Governor, Lupe Valdez, is such a horrible candidate that Greg Abbot might win re-election in a truly historic landslide, and that is going to drag down Beto’s numbers as well. (Abbot 75%, Valdez 25%, is not out of the question)

When asked the other day why she was delinquent on $12,000 worth of property taxes, Valdez, who was previously a sheriff, replied that it was all Greg Abbots fault. That she didn’t pay her taxes. And apparently, she was serious.

Inspectorrudy: They offer give-always, resentment, and class warfare. As sad as it is, there are plenty who buy into those things.

It’s been clear for a while that there wasn’t going to be a blue wave. The moment the tax bill was passed, and we saw how good it was there was no chance for the Dems capturing the Senate. Their only hope for that before but was for a demoralized and angry-against-establishment Republican base.

Following the Kanye tweet and the hoopla following that I felt that the chance of the Dems winning the house was getting smaller by the day.

Right now I think there’s more chance that the Republicans will gain house seats than there is for them to lose the chamber. Still, the odds are still in favor of the Dems picking up a few seats.

No matter what happens this fall, it’s smart to have right-leaning opinion people saying positive things rather than jerks like Kristol framing his bitterness as if it were mainstream consensus.

If the Stupid Party can avoid self inflicted injuries and stumble into gains in Congress, the leftists will provide more Trump-induced comic relief for months. I will laugh at their pain!

The loss of favorability in polls is inversely proportional to the rapid increase in hysteria to find ANYTHING to paste aTrump with. It’s especially apparent in the desperation in much of the media.

We are certainly not the Left, I’m somewhat in awe of their ability to keep the suspense and drama dialed up to 11 non-stop for 18 months…

…but we still share the same DNA, mostly. And I remember the investigations surrounding Bill Clinton’s Impeachement. Every day another Bombshell that thundered then sparked then fizzeled out like a Dud. I think there was even a “Lucy teeing up football #24 for Charlie Brown” ooed cartoon.

It was so frustrating and exhausting that I eventually flipped the TV off and took a several month break from all things political. Hibernated till the announcement of 4 articles of impeachment lured me back but. Then the Senate merely slapped his wrist. Aaaauuugh! And Lucy smiled again.

I wonder if the Left is there now. Burnout. This thing is litterally driving them mad and that’s got to be taxing.

And they still have a nightmare coming down the tracks. A 20-30% slice of the African American vote waking up and leaving the Dens Plantation. Fueled by Trump – when he rubs shoulders with black cultural VIPs it comes across as genuine, not like some Bush III pretending he”s a fan of Nina Simone.