A regional drought is being blamed for the intensity of the rapid spread of the fires. 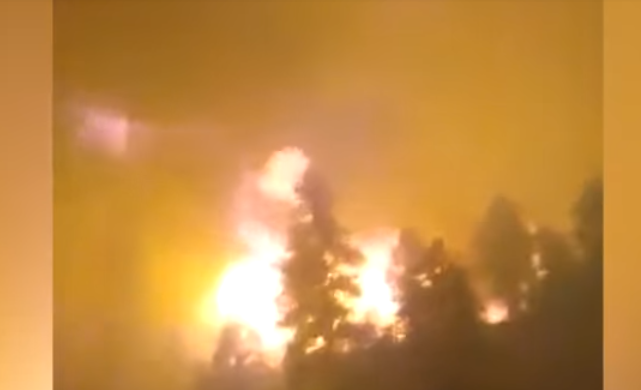 Massive wildfires in Colorado and New Mexico have already incinerated nearly 30 thousand acres and forced hundreds to evacuate their homes.

The fire, about 15 miles outside the town of Durango, is 0% contained and has forced the evacuations of 1,500 residents, Mackensen said. No structures have been destroyed, he added.

…And a massive fire in Colfax County, New Mexico, had grown to 27,290 acres by Saturday morning and was 0% contained, according to InciWeb, a US government-operated multiagency fire response site. Nearly 450 personnel were battling that fire.

A mandatory evacuation order was in place for the town of Cimarron, where 296 structures were threatened by the blaze, called the Ute Park Fire, according to an update on InciWeb.

The fires had no containment and the cause was under investigation. A regional drought is being blamed for the intensity of the rapid spread of the fires.

“Under current conditions, one abandoned campfire could cause a catastrophic wildfire, and we are not willing to take that chance with the natural and cultural resources under our protection and care,” National Forest Supervisor James Melonas said in a statement to the Santa Fe New Mexican.

Northern New Mexico has been in a prolonged period of extreme drought. Areas in and around Ute Park are currently in exceptional drought – the worst category – according to the U.S. Drought Monitor.

Thunderstorms are due in the impacted areas Sunday, though there is some concern that they could cause a new set of problems.

The shifting winds may spread smoke from the fire into southeastern Colorado. The smoke is already creating poor air quality across northeastern New Mexico. Motorists planning to travel on Interstate 25 through the area should remain alert for reduced visibility through the weekend.

“Much needed rain is in the forecast for Sunday afternoon and evening,” Pydynowski said. “However, thunderstorms are also expected and can prove problematic for firefighters by kicking up gusty and erratic winds, along with lightning dangers.”

There is a risk that the thunderstorms also produce damaging winds, hail and flash flooding. Lightning can also strike new blazes outside of where it is raining across New Mexico, southern Colorado and into parts of western Oklahoma and Texas.

In a shock video moment, men share their narrow escape from the Ute Park fire in northern New Mexico.

Prayers are going out to our friends in New Mexico and Colorado.

Wildfire Watch: New Mexico businesses are offering help to evacuees affected by the Ute Park Fire. We have a list here:https://t.co/tW5AAv7tdY pic.twitter.com/ddlUwmYLUa

Yep, Trump takes credit for everything good in the world; sometimes even before it is clear there has been any good.

So why shouldn’t he be blamed for everything bad. Why doesn’t he fix it? He’s the only one who can – according to him.

Yes, yes, this is Trump’s fault! This is an obvious result of Climate Change and Trump did pull out of the Paris Accords, so naturally none of this would have happened if Hillary had been granted her rightful place in the Oval Office, right?

There are many companies who would love to thin the forest, and they would pay big money for the right. Move from you fascist position that government must control everything, and you will see a world of opportunity open before your eyes.

For Scouts (or former Scouts):

For Scouts (or former Scouts:

“Officials with New Mexico State Forestry say Philmont Scout Ranch staff has also evacuated. KOB has been told that there were no scouts at the camp. However, fourteen outbuildings on the ranch were destroyed. ”

“Here’s a look at evacuation centers opening up in the area for residents and local businesses offering free accommodations:

For Scouts (or former Scouts):

“Officials with New Mexico State Forestry say Philmont Scout Ranch staff has also evacuated. KOB has been told that there were no scouts at the camp. However, fourteen outbuildings on the ranch were destroyed. ”

“Here’s a look at evacuation centers opening up in the area for residents and local businesses offering free accommodations:

Philmont Scout Reservation is impacted by this, the fortunate part is the camp is in pre-season mode, but there are a good number of Scouting personnel there, as well as youth, helping to get the camp ready for hiking. It is heartbreaking for me, as I had been there in 2007. In the early 2000’s there was a fire there that destroyed a large swath of forested areas. I know it was slowly coming back, but it will take generations for that to happen.

The Scouts have well over 100K acres there, a gift from Philips Petroleum founder, and a treasure to thousands of youth and adults who go on treks there of 10 days duration, covering at least 100 miles of mountainous hiking. Being a Scouter for 50 years and counting, this news is heartbreaking. It will probably ruin the trip of a lifetime for many young people. I hope this fire doesn’t take lives.

It’s taken out a dozen structures that were unused. Those were structures that Philmont had considered demolishing. The good news is the entire ranch hasn’t burned and since the winds are pushing the fire to the Northwest, it’s likely to spare more of the ranch. The challenge this year is going to be rerouting hikes that were planned for the burned areas. There’s still plenty of other areas to use.

“A regional drought is being blamed for the intensity of the rapid spread of the fires.”

Only because the global warming crowd isn’t awake this early on a Sunday. By supper time gLoBaL wArMiNg will have supplanted that stupid ‘regional drought’ explanation made by, um, wild fire experts on the scene.

I can’t say it is comforting that climate deniers do get up early and then fight with hot air and bullsheet.

Don’t you find yourself childishly redundant?

This has nothing to do with AGW. This is the normal climate for New Mexico. We’re the 5th largest state in the nation, yet our population is only around 2 million. Why? Because there’s no freaking water. Fires in this state are not even remotely unusual.

We actually do a lot of controlled burns here every year. It’s also the policy to let fires burn as long as they can be controlled and don’t threaten human habitation.

Fire is natural in that landscape.

And if they don’t “do something“ then they will be blamed by people who build homes in the natural fire zone when those homes burn down. I agree they should let nature manage the fires, as it has for tens of thousands of years. It should be thar you’re going to build a subdivision, then you need to build a huge fire break around it, and the buildings have to be non-combustible, and there has to be no way for burning embers to blow in. But that’s not how we do things, unfortunately.

Man, Legal Insurrection is really behind the ball here.

USA Today provided us a map of ‘Colorado’ with their last story abou tthem!

Why can’t you guys get on their level!

The 1988 Yellowstone fires that ultimately wiped out about a third of Yellowstone’s 2.2 million acres got out of control in part because the experts had built computer models about how forest fires behave. They convinced they could predict how the fires spread and how to manage them. The models failed.

Obama-like imbeciles who take control of forest management (as well as builders – and the bribed elected officials who permit them build in dangerous areas) allow burn areas to overgrow, creating the conditions for insect infestation and super fires.

“The recovery is certainly proceeding much faster than I would have predicted,” concluded Norman Chris-tensen, of Duke University, after the symposium…”
https://academic.oup.com/bioscience/article/49/2/93/240373

The two guys in the video… they weren’t “escaping” anything. They deliberately went around the roadblock to get back to Cimarron after the evacuation had been ordered. They’re idiots.

The area in question which is between Eagle Nest and Cimarron was ripe for a fire this year. 8 months ago, that part of the state wasn’t in a drought but because of the lack of snow this winter, that part of the state is considered to be in exceptional drought conditions today. This is completely normal for us. We’ve cycled between exceptional drought to no drought forever. The problem this year, as we’ve seen many years in the past is the lack of snowfall and spring rains combined with single digit humidity and high winds mean the state is going to burn. Thunderstorms can roll over and produce tremendous lightning but no rain. In the case of the Ute Park Fire, it’s most likely some dumbass who abandoned a camp site and didn’t properly extinguish their fire. There were no lightning strikes in the area last week.

Not defending anyone who might have abandoned a campsite fire, or didn’t properly extinguish it, but ground fires can happen from under ground roots catching fire and not being seen or noticed. These underground fire systems can travel a fairly decent distance from the camp fire ring, and even very experienced campers can not notice the danger, though this is more usual from new campfire sites, not long term use ones. The camp fire shouldn’t have been made in the current conditions, which I would blame them for, but at this point it is hard to know exactly what started this, in extreme dry conditions even a cigarette tossed could have started this.

It does happen, it is part of the cycle of forested lands, but proper management of lands and creating firebreaks helps contain it to smaller areas. The lands can come back, the fire can help with making the ground fertile, but large swath fires are not desirable, they do create a new ecosystem, but it takes a long time to come fully back.

A third of Yellowstone was not wiped out. It had a forest fire, which is a natural phenomenon. After a while, the forest grew back, with diseased and dead growth having been burned out.
That land has had periodic forest fires since dinosaurs roamed the earth. Or perhaps even since Nancy Pelosi was born.

A burned forest here and there is as natural as wet water. When a national park is razed by fire, it is just displaying one of the natural states of all fire-prone areas. It’s just because we’re used to seeing it green that we think when it is burned that it is “unnatural,” when it is actually unnatural for it to not burn now and then.