Kenneth Marcus has been confirmed as Assistant Secretary for Civil Rights in the Department of Education. In that capacity, he will lead the Civil Rights Office, which was scandalized during the Obama administration, particularly on the issue of campus due process.

The nomination had been opposed on a party-line vote, with Democrats siding with anti-Israel activist groups. See these posts for background:

Extremist anti-Israel groups kept up their opposition right until the vote: 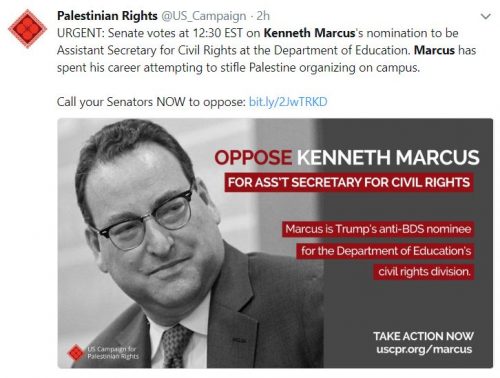 Senator Lamar Alexander, Chair of the HELP Committee, issued this statement in support of the nomination:

Mr. President, if I may say one more thing about the vote that we will be having at 12:30—today the Senate is finally voting to confirm Ken Marcus, a well-qualified nominee to serve as Assistant Secretary for Civil Rights at the Department of Education.

I worked to get a time agreement for this vote because Mr. Marcus did not deserve to be the subject of the Democrats’ unreasonable and unnecessary obstructions and delays. One Senator can do that or two Senators. I want to thank Senator Murray from Washington and the Democratic leader, Senator Schumer, for helping to bring these delays to a conclusion today.

For example, Mr. Marcus was nominated on October 30, 2017, 220 days ago. He has been pending on the floor since our committee approved his nomination on January 18, 140 days ago. To compare, President Obama’s two nominees to these position Russlynn Ali and Catherine Lhamon were confirmed in 45 and 52 days and both were confirmed by a voice vote.

That doesn’t mean every Republican supported these nominees, but it meant we knew students would be better served when the Department of Education had someone in place even if Republicans might disagree with that person. I would remind my colleagues that when President Obama proposed to have John King serve as acting secretary of education for a year, I went to him and said Mr. President, the country is better served and we’re better served if you send the nomination up and let us confirm Mr. King, even though we disagree with him. And the president did that and I made sure he was confirmed within a month.

That’s what should happen when a president makes nominations. So it’s time to confirm Mr. Marcus, give Secretary DeVos and our country an Assistant Secretary for Civil Rights. Mr. Marcus has a deep understanding of civil rights law. He founded the Louis Brandeis Center for Human Rights Under Law, served as staff director for the U.S. Commission on Civil Rights for four years, and has effectively served in this position before when he worked in the Department of Education under President George W. Bush.

He was delegated the authority of Assistant Secretary for Civil Rights. In that position he was in charge of enforcing civil rights laws such as Title IX reminding schools of their obligations, established in regulation to have in place Title IX coordinators and procedures when there was an alleged Title IX violation.

He enjoys wide support. 68 organizations signed letters supporting his nomination including Hillel International, the largest Jewish campus organization in the world which had this to say, Mr. Marcus, “has been a long time champion for civil rights and for college students. We have worked personally with him on several campuses across the country in response to specific issues of bigotry and discrimination and we have found him to be extremely skilled and knowledgeable in civil rights laws.”

The Assistant Secretary for Civil Rights, Mr. Marcus will lead a very important office—the Office of Civil Rights has the responsibility of ensuring that Title IX and other civil rights laws and the protections they provide to all students are fully enforced.

When Mr. Marcus is confirmed he’ll get to work enforcing those laws so that all students feel safe at school. So I’m glad we’re having this vote today, Madam President. I support the nomination, and I urge my colleagues to support Mr. Marcus as well. I thank the chair and I yield the floor. 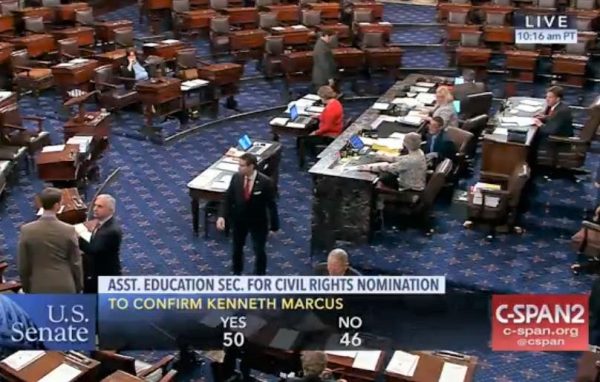 “For example, Mr. Marcus was nominated on October 30, 2017, 220 days ago…. To compare, President Obama’s two nominees to these position Russlynn Ali and Catherine Lhamon were confirmed in 45 and 52 days and both were confirmed by a voice vote.”

Good grief. Who is the party of ‘No’ again?

Ol’ Yertle McConnell plans to keep everyone after class and cancel recess, but I’ve doubts if that will solve this recalcitrant obstruction by Dems.

It might be wiser to let Trump use his pen & phone to greenlight dozens of recess appointments, then have subsequent confirmation process grind it out – while the appointees congruently do the business of this administration.

Recently I was talking to someone who started raving about the stupidity of “so-called conservatives” who wanted to get rid of whole departments instead of just dealing with government waste (apparently he doesn’t know that Al Gore eliminated all of that years ago). He said, “There are even some people who want to get rid of the Department of Education -”

I interrupted him to say that I was completely in favor of that goal. I’ve known this man for at least 10 years. That was the first time I ever saw him at a complete loss for words. He looked as if I had just refuted the law of gravity or something. Completely shocked.

I guess he thinks the DoE does something to promote education. I have no idea why.

He probably listens to NPR. They’ve gone all the way to broadcasting speeches from the CPUSA. They now say they are “progressive.”

And to complete your line of questioning: Why isn’t the elimination of DOE mentioned in the article?

Why isn’t the media showing pictures of Trump with his faced framed inside halos? If any President deserves such photos, Trump does. On the other hand, Trump doesn’t need such photos as his predecessor did.

Hope he does some things such as this.