Kenneth Marcus is the nominee to lead the Office of Civil Rights in the Department of Education.

Marcus is uniquely qualified for the position, we wrote when he was nominated in October 2017:

Marcus is extraordinarily qualified for the job, and is an excellent pick for leading the Office for Civil Rights (OCR).

He’s got considerable experience on the issues at stake for the OCR, having previously been the staff director of the U.S. Commission on Civil Rights for four years during the George W. Bush administration and, prior to that post, serving as deputy assistant secretary for civil rights at the DoE.

In terms of the fight against the boycott, divestment, sanctions (BDS) movement and rising antisemitism on American colleges and universities, Marcus has been a leading voice for years (he’s argued that some efforts to boycott Israel’s academia are “illegal”, antithetical to the “mission and values of academia” and “really thinly veiled anti-Semitism” because only Israel is “singled out for boycott”).

He currently serves as the director of the initiative on antisemitism at the Institute for Jewish Community Research in San Francisco, and was the Lillie and Nathan Ackerman Chair in Equality and Justice in America at the City of New York’s Baruch College (School of Public Affairs).

He’s also written extensively on the topic of antisemitism. 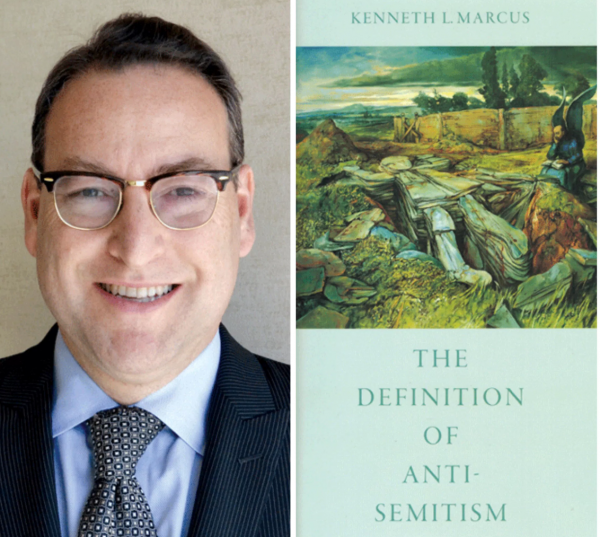 Despite his stellar credentials, Marcus was the target of a vicious smear campaign by a coalition of anti-Israel groups, joined by fellow travelers from progressive “civil rights” groups. We documented this attempt to stop the nomination in our December 2017 post, Action Alert: Anti-Israel Lobby intensifies campaign against nomination of anti-Semitism scholar Ken Marcus:

After Trump announced Marcus’ appointment on October 26th, virulently anti-Israel organizations and activists, including Jewish Voice for Peace (JVP), If Not Now, Palestine Legal, the U.S. Campaign for Palestinian Rights (USCPR), the U.S. Academic and Cultural Boycott of Israel (USACBI), and the Arab American Institute, mobilized against Marcus.

Initially, they focused on falsely accusing Marcus of suppressing the criticism of Israel on campus and warning that, if confirmed, he would continue to repress college students from organizing for Palestinian rights…

That is, before the December 5th Senate HELP committee hearing, the smear campaign against Marcus was almost entirely centered on delegitimizing him as an “anti-Palestinian crusader”—someone who opposes Palestinian rights because he allegedly “bullies students and faculty who advocate for Palestinian rights”, “undermines pro-Palestinian activism on campus”, tries to get “student activists disciplined” and works to “defund” university Middle East Studies program.

Multiple statements, Action Alerts, petitions, videos, and editorials (see, for example, here and here) were written and produced during this time centering on the free speech of Palestinian student activists and the ways in which Marcus would supposedly trample on it….

In recent weeks, this ugly smear campaign has expanded from just opposing Marcus on account of his position on BDS and antisemitism—the central messaging before the December 5th confirmation hearing—to an effort over the last several weeks aimed at destroying his civil rights record in general.

Basically, his application of civil rights protections for other minority groups is now coming under attack.

Code Pink’s Ariel Gold, a viciously anti-Israel activist who disrupted prayers at the Western Walland snuck a Palestinian activist who embraces using children to confront soldiers into a third-grade classroom, is among the leaders of the campaign against Marcus:

.@NationalSJP in the Senate hearing of anti-Palestinian rights crusader Kenneth Marcus to be Assistant Secretary for Civil Rights in the Department of Education pic.twitter.com/uMrdFmU1n7

By tracking the social media of JVP, Palestine Legal, and USCPR, for example, you can literally see how the messaging shifted after the Senate hearing earlier this month, during which Marcus’ opposition to the Israeli boycott didn’t come up at all in the questioning.

That’s probably the main reason that the attacks against Marcus are now addressing a wider range of civil rights issues that are of interest to the HELP Committee.

Because Marcus, and dozens of other Trump nominees, did not receive a vote by year end 2017, and Democrats refused the courtesy of rolling over the nominations, Marcus had to be renominated in early January.

Marcus eventually was voted out of the HELP Committee in mid-January 2018, on a strict party-line vote:

Marcus was voted out of Committee on a straight party line vote, 12-11. All Republicans voted in favor, all Democrats against.

Despite clearing the committee in January, Marcus’s nomination languished awaiting a floor vote. In part it was Democrat opposition to him personally, in part general Democrat stall tactics against all Trump nominees.

Finally, Marcus has been cleared for a floor vote, by a May 23 unanimous consent agreement, with debate and vote to be determined. 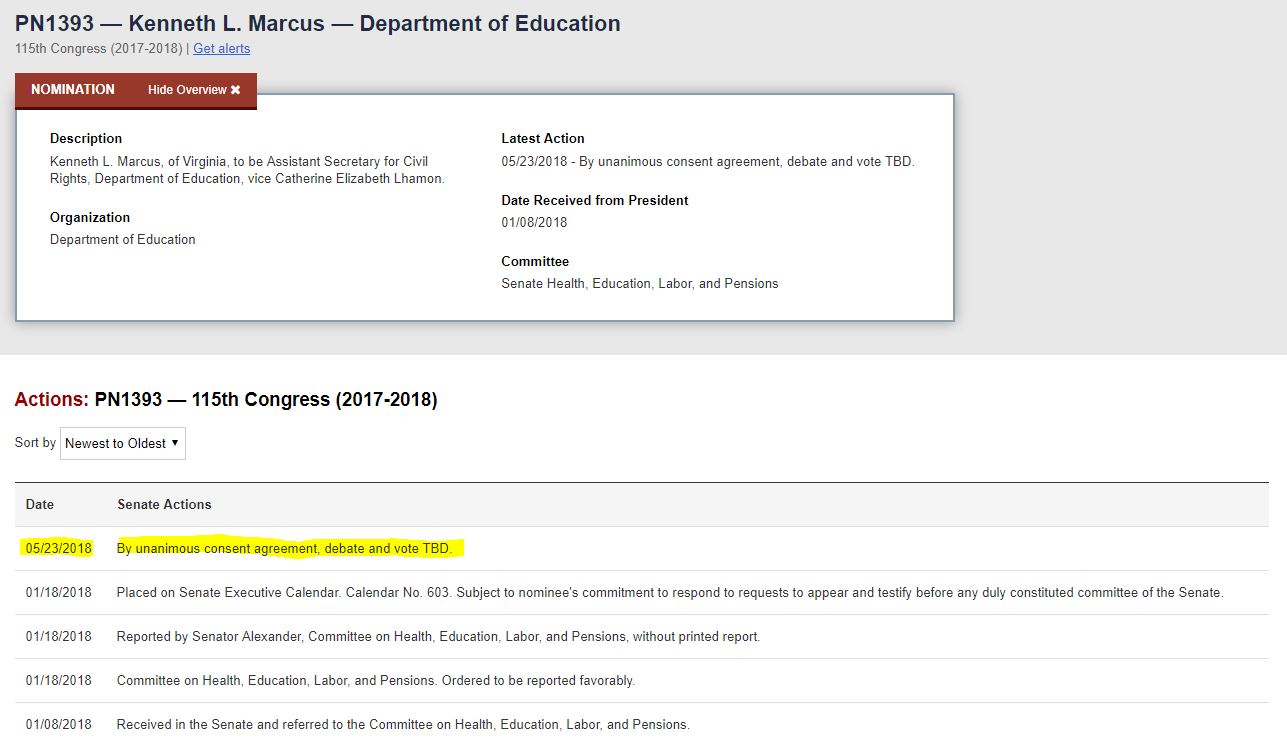 While no date has been announced for the floor vote, Mitch McConnell needs to prioritize a vote now.

This is a hugely important position, and Marcus has been delayed long enough.

Once again, proof that Donald Trump is the most pro-Israel President that the US has ever had.

OK. I see an argument for a “civil rights” guy in DOE, and that this guy is a good pick.

I don’t…and never have…seen a valid argument for a DOE at all. I DO see a bunch of good arguments to kill it.

we agree! As I recall, the DoE was created by Jimmy Carter as a way to curry favor with the Teacher’s Unions. Reagan was going to get rid of it, but couldn’t, and then Bush 1 & 2 just ignored it, while Clinton and Obama bloated it.

schools are supposed to be local control, public universities are created by the States. no need at all for the Feds to stick themselves into it – other than powerful interest groups, like the Teachers Union, seek ways to help them evade any local controls.

IIRC correctly, W made it marginally worse with “No Chile Left Behind”.

There is no possible Constitutional justification for the DOE. It’s a German notion from bottom to top, and certainly not an American idea or ideal. It may, indeed, be the Frankfurt School’s coup de main.

I have some friends that are either teachers, or now retired teachers. They had things to say about NTLB that would curl your hair. They all hated it.

why does doe have civil rights office?
why does any entity (except maybe IG office for investigations) have this?
stupid headcount padding.

Overview of the Agency
https://www2.ed.gov/about/offices/list/ocr/aboutocr.html
The mission of the Office for Civil Rights is to ensure equal access to education and to promote educational excellence throughout the nation through vigorous enforcement of civil rights.

We serve student populations facing discrimination and the advocates and institutions promoting systemic solutions to civil rights problems. An important responsibility is resolving complaints of discrimination.

not a duplication really as much as it is an EVERY division doing a headcount padding.
every federal dept has this.
its wasteful and useless (IMO, others may disagree) and should be canned.
IG office (and honestly maybe doj for investigative issues) MAY need this due to stupidity of current laws.
but if the laws were colorblind they would not be needed even then, sadly our dubmass politicians hate colorblind laws and regulations.