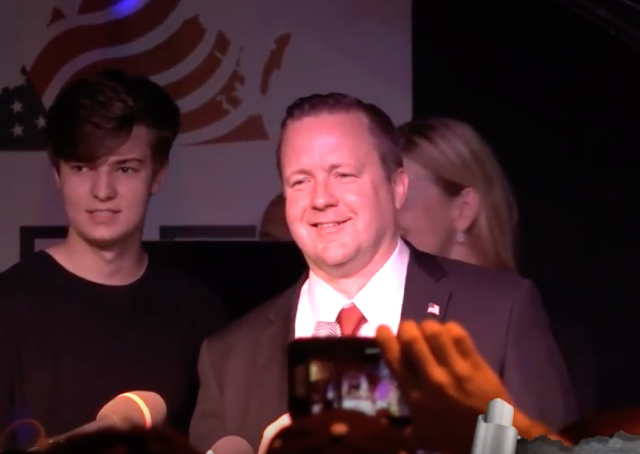 Looks like Sen. Kaine won’t have too difficult a time cruising to re-election.

Corey Stewart won the Republican Senate nomination last night and is already being cast as “a Roy Mooresque headache.”

It’s what looks to be a case of guilt by association.

Last year, Stewart was filmed saying Paul Nehlen (the biker with delusions of unseating Paul Ryan) was one of his personal heroes. Shortly thereafter, Nehlen was banned from Twitter and the GOP for a series of racist tweets.

But Nehlen wasn’t Stewart’s only flirtation with crazy. WaPo has more:

It mirrors a problem Stewart had last year during his unsuccessful bid for the GOP nomination for governor. He said he regretted attending a news conference about Confederate monuments with Jason Kessler, who later organized a white-nationalist rally in Charlottesville that erupted into violence and led to the death of a 32-year-old woman.

There are few things worse than being publicly smeared for befriending someone who later went on to do or say wildly inappropriate things. Buuuuuut, if you’re running for office, it helps to exercise a little discernment and avoid the far reaches of the fringe.

According to The Hill, the Senate GOP campaign arm, the National Republican Senatorial Committee (NRSC) “has no plans” to endorse Stewart.

Speaking to CNN, Sen. Corey Gardner, Chairman of the NRSC, said, “We have a big map, right now we are focused on Florida, North Dakota, Missouri, Indiana. I don’t see Virginia in it.”

Sen. Cory Gardner tells me NRSC has NO plans to endorse VA Senate candidate Corey Stewart, despite Trump tweet expressing support. “We have a big map, right now we are focused on Florida, North Dakota, Missouri, Indiana. I don’t see Virginia in it.”

Trump congratulated Stewart on Twitter Wednesday morning, saying he has a “major chance of winning”:

Congratulations to Corey Stewart for his great victory for Senator from Virginia. Now he runs against a total stiff, Tim Kaine, who is weak on crime and borders, and wants to raise your taxes through the roof. Don’t underestimate Corey, a major chance of winning!

On president’s tweet endorsing Stewart: “I think my focus continues to be on a number of states that are winning and ahead.”

And this is why I don’t ever give the National Republican Senatorial Committee any money when they call … and call all the time they do.

Maybe you don’t like Stewart; there are no doubt better candidates. But he is the candidate and deserves support.

Doesn’t really bother me at all. I long-since stopped giving ANY money to the NRSC. I simply send a check directly to the candidate. Seems to get the job done.

And, at the risk of being a flame target here, there will be at least one check to Stewart.

Maybe you don’t like Stewart; there are no doubt better candidates. But he is the candidate and deserves support.

” When David Duke was the Republican candidate ”

And off Milhouse goes into the most vile example he can find. Not the repeated failures of the NRSC to support Republican Senate candidates in New York. Nope…Gotta go full racism.

But that’s Milhouse. Why make an informed and salient argument when you can scream RACISM! and call it a day.

at least they have the excuse of being retarded…. oh, wait…

How was that racist? David Dukes was a racist. Milhouse has peculiar ideas, but doesn’t display that tendency.

Every one of the responses to and about Milhouse should be pulled down by the mods.

They are vicious attacks that bring nothing useful to the issues.

in that way they are as valid asa the drivel you spew here regularly.

Actually, Milhouse does make a good point. And yes, the most vile person possible is the best person to use as an example in making that point. Sometimes that happens, and often enough we shouldn’t be surprised.

Milhouse ~ “Why does he deserve support?”
.
What are your favorite qualities of the Democrat he’ll be running against?

That’s completely irrelevant. The only topic here is tiger66’s peculiar contention that anyone who wins a party primary (presumably including by being the only candidate) deserves the party’s support.

None you you alt-right bois had the intellectual fire-power or integrity to deal with it.

So you just launched a mindless mob attack, as is your wont.

Haha, everyone who disagrees with Ragsy is now alt-right. You’ve reached a new level of crazy, man.

No, alt-righters are just alt-righters, and there are several infesting LI. They tend to self-identify.

There are a number of logical fallacies in this line of thinking – here’s two:
https://yourlogicalfallacyis.com/composition-division
https://en.wikipedia.org/wiki/Reductio_ad_absurdum

I haven’t seen any details that he is a flawed candidate like Moore. Is he?

My problem with the whole thing is that it is a one-way street. How many times have the Establishment types asked, nay, DEMANDED, that conservatives support the most milquetoast leftist candidate with an R next to their name because they have an R next to their name? “You have to support him because you have nowhere else to go.”

There are some circumstances where I agree: Charlie Baker is probably the best we could hope for out of Massachusetts.

In Virginia, this candidate where we (conservatives) agree on 85% or more of what he stands for. The establishment milquetoast K-Street Chamber of Commerce Republicans won’t support him because he isn’t X enough, and I say X is “pro-immigration/cheap labor, pro-abortion, pro-interventionalist, pro-big government.” They would rather have a D in there because the D will be all these things.

I contribute to the Senate Conservatives Fund, the NRA-PVF, and individual candidates. No National R committee ever again.

Before you go around accusing anyone of fallacies (which I challenge you to apply specifically here), you should know what you’re talking about.

At least read the root article.

Duke was originally a Democrat.

Look, everyone knows that the whole “must support the GOP candidate” only applies to RINOs. It died with the Tea Party candidates they betrayed.

I quite agree. I’m not a fan of Stewart (I voted for Jackson), but the alternative is Tim Kaine, who has proven to be stupid and dishonest, and will vote against the President every time.

There are many in the Republican Party who find victory abhorrent.

Corey Gardner is functionally a Democrat. He was forced on us as the candidate by the Republican State Central Committee, who forced the half dozen primary candidates to drop out or be expelled from the party, and then announced that Gardner WOULD be the candidate for Senate.

He is one of the enemy, and hates Republican voters.

And on cannabis would you believe that Sen “Indian” Warren and Sen Gardner (R-CO) have introduced a bill? With Trump’s approval.
http://classicalvalues.com/2018/06/federal-pot-legalization-bill-introduced/

A position he has held for almost 30 years.
http://www.ocregister.com/articles/company-744807-trump-joke.html

So Trump wants to end pot prohibition? Good for him. It hasn’t worked. Gun Prohibition won’t work either. And saddest of all Abortion Prohibition will get similar results. Because Americans won’t obey laws they don’t like. It is traditional.

Screw the NRSC and hard. Every mailer I get from them goes right in the trash. As a Trump voter, my goals and needs do not line up with the NRSC… as they are out for status quo. They do not want candidates they can’t control and they don’t want any Trumpian candidates.

Prediction: The President is going to actively campaign for GOP Senate candidates on his own. Folks who align with him or he needs.. … and he’ll do it even if he has to do it alone without the NRSC or any other DC based wonk-factory. The President is going to drag the GOP over the line kicking and screaming. Maybe next year they’ll start getting on board instead of sitting on their collective hands. #MAGA

The NRSC refusing to endorse him? They may have just helped him. Now he can run a truly insurgent, outsider campaign. It’s an uphill battle, but if he wins, he owes them nothing.

Get rid of Kaine at nearly any cost…that crap weasel can’t be wiped from existence fast enough.

Who, I wonder, voted down this remark? Lol some here backing that cretin Kaine?

The NRSC is an anti-democratic institution that presumes to tell state citizens who they can and cannot have for a Senator. Strangely, I don’t see the NRSC mentioned anywhere in the Constitution.

“The NRSC (National Republican Senatorial Committee) is the only national organization solely devoted to strengthening the Republican Senate Majority and electing Republicans to the United States Senate.”

So… is it electing Repubicans or electing the right Republicans?

The right Republicans — they want no one elected to public office as a Republican that the party leadership doesn’t control. They will work harder than the Democrats to defeat anyone running as a Republican who isn’t a part of their corrupt system.

This is why they hate Trump (and hated Reagan in the past) — he’s a threat to their ability to sell government for the money that gives the party establishment control over Congress. They would much rather be in the minority, with a solid block of votes to sell to their contributors, than to have a majority that they can’t control.

The Establishment weenies would RATHER have Kaine remain in office than a (any!) Republican?

I suppose these SAME Densa (Mensa’s inverse counterpart) candidates would be akin to never-Trumpettes who would have rejected Trump (protest, indignation non-vote) and instead be at the mercy of Queen Shrillary!? (Well, at least it would not be Trump…so there! Harrumph!)

At least Kamikazee pilots were ATTEMPTING to inflict damage on the enemy in their suicide attacks, unlike these morons.

The NRSC is totally useless as far as I am concerned. I cut their money off years ago.

“Looks like Sen. Kaine won’t have too difficult a time cruising to re-election.”

I think in the Trump Era saying you are doomed without the help of the GOPe isn’t paying attention. The man’s hands are free to say he isn’t voting for McConnel and the GOPe agenda. He can run as an alternative to Kaine and the GOPe which is WHY ed Gillespie came close but didn’t win against Warner.