Private sector, for the win! 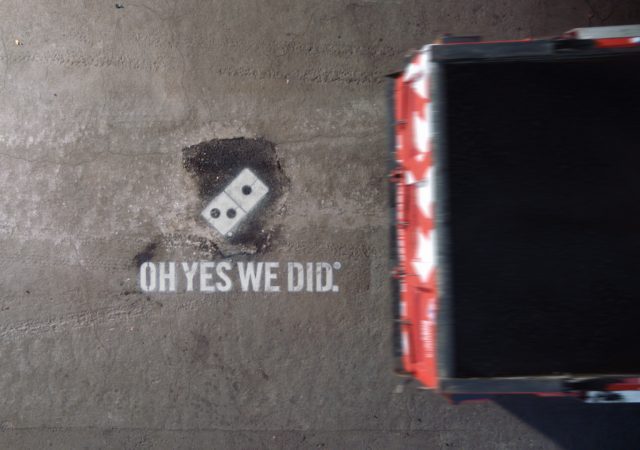 Under a new initiative, Paving for Pizza, Domino’s is soliciting nominations for towns in desperate need of deliverance from rough roads, for the pizza’s sake, naturally.

“Have you ever hit a pothole and instantly cringed? We know that feeling is heightened when you’re bringing home a carryout order from your local Domino’s store. We don’t want to lose any great-tasting pizza to a pothole, ruining a wonderful meal,” said Russell Weiner, president of Domino’s USA.  “Domino’s cares too much about its customers and pizza to let that happen.” 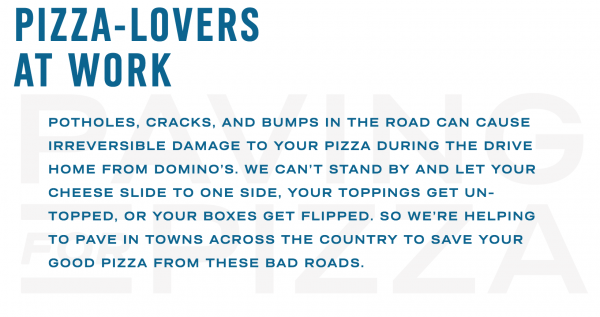 Bartonville’s mayor is a fan of the program.

Anyone can nominate their town at pavingforpizza.com.

The best part of this whole promotion though? It challenges the age-old argument of government necessity in the most basic functions of infrastructure maintenance.

Private sector, for the win!

I have taken it upon myself to do some asphalt repairs on the street I live on. I bought a couple of bags of Asphalt Repair ($20 for a 50 pound bag), put out some safety cones, and made the repairs. I don’t have a steam roller, but I placed a sheet of plywood over the patches, and rolled over the plywood a few times with my pickup truck. Nice solid repair.

A month later, I applied blacktop seal over the patched areas, and it all looked good.

I did not clear it with the city. My neighbors did not care that the repairs were illegal, they are happy with the improvement.

I also installed concrete curb in front of my place, to replace the rolled asphalt transition that the City (or developer) had installed about 50 years ago.

Private work, without bothering with City permits, is a long-standing tradition for me!

Nowadays, most rollers run on diesel fuel, not steam 😉

The next logical step is electing Domino’s personnel into office. There’s no reason not to, since they’re the ones improving citizens’ lives.

Maybe they can run a lottery to teach reading in a few down-on-their-luck towns. After all, you can’t order a pizza if you can’t read!

They definitely should do garbage collection. I do notice empty Dominoes Pizza boxes on the side of the road.

Maybe they can do fitness programs to help people take off the fat that Dominoes adds to their bodies.

Pizza Hut has a program that encourages reading for K-6 grades. Teachers and schools can get coupons to give to students for meeting reading goals. So, Dominos will do roads, Pizza hut, reading. Win-win

Let me see if I understand this: They fixed some potholes in 4 towns as part of a national advertising campaign; including getting sites like this to publicize their product. That is definitely the solution to paving our roads.

And you have done exactly what to improve, well, anything?

Yeah, nothing, exactly what I thought.

You can just smell the hatred for private solutions to US problems dripping right off your post. Sad.

It’s Yellow Troll. What did you expect? Solutions? Commentary on how the private sector is “doing well by doing good?” Please.

Clearly, Dominoes has NOT watched Corner Gas, season 3, episode 2 (33 overall). Briefly, the city of “Dog River” (Saskatchewan) couldn’t afford speed bumps and relied on potholes to slow people down. Filling them created a speeding problem in town. 😉 I miss that show! Silly fun!

I wonder which is the better pothole filler – Domino’s double cheese sauce with or without pepperoni?

I am very much in favor of having businesses make their civic contributions in areas that they already know well.

Same logic that causes shop-keepers to sweep the front walk in front of the store, and so on.

i’d nominate Lost Angels, but Dominoes corporation would have to file BK before they got all the streets here fixed.

I would wager that if the public sector road/highway maintainers would fill potholes at night when they get paid time and a half that more would be filled. Instead, they want to fight traffic during the day, fill less, and ensure job security for tomorrow 😉 That is the way. Oh and retire after 25 or 30 and live another 20 on taxpayer subsidized pensions.

Get two shovels: we finally figured something obama and clinton are good for.