President Trump’s rating is rising where it counts in the Heart of the #Resistance.

Kemberlee Kaye notes that there is no evidence of a “Blue Wave” of potential Democratic Party electoral success in the November election. In Texas, that may not be too surprising.
However, in a stunning follow-up, California’s Democratic star Gavin Newsom (the likely winner of our state’s June gubernatorial primary), also indicates that the reports of the “Blue Wave” are not exactly accurate. The following is a summary of the interview conducted by Politico contributors:

— BIG BLUE WAVE? Newsom might have reason to be riding high on that theory, but yesterday — riding on his campaign bus — he expressed real concerns that Dems may take their “Big Blue State” status for granted. Newsome invited the California political press corps aboard his campaign bus Monday, as he traveled from San Francisco City Hall on the first leg of a final state barnstorm. He gets credit for a “Straight Talk Express”-style effort to talk issues with reporters at length, including his concerns about turnout, and whether Democrats will feel too confident about their prospects in solidly blue California.

— Asked about turnout: “It’s hard to tell. … Our internal projections, we’re expecting much higher turnout than 33 percent. Right now, based on the absentees, it’s hard to get a sense.’’

— On the “big blue wave,’’ Newsom said: “I don’t see evidence of that. … In California, we kind of feel like we’ve got this. It’s a big blue state and in some respects, I think we think kind of take things for granted at times.”

There is even more interesting news: President Trump’s rating is rising where it counts in the Heart of the #Resistance, California.

All that talk of a Democratic blue wave sweeping congressional races in California could be for naught if a new poll is on target: It shows President Trump’s approval rating surging to 50 percent in Orange County, site of four tight races that could determine if Republicans hold the House.

A more popular Trump is bad news for Democrats, who are trying to grab seven GOP-held congressional districts statewide that Hillary Clinton won in 2016, including the four in Orange County. That would give Democrats a big jump on their goal of flipping 23 seats nationally to regain the House.

Democrats are banking on the president’s unpopularity to help them win those seats. It looked good for them two months ago, when Republican pollster John Thomas did a survey in Orange County that found Trump’s approval rating at 43 percent. But last week, his poll of 450 likely voters in the county showed that 50 percent of respondents viewed the president favorably.

The digital ads, which are running on Facebook, Google and Pandora, urge voters to go to the polls on election day or return their mail ballots. The ads are also targeting Korean and Mandarin-speaking Republicans. And the NRCC will launch a text messaging program as the election nears.

It’s the NRCC’s final push before the Tuesday primaries in three districts that Hillary Clinton won in the 2016 election. Democrats have been heavily targeting all three seats, but they’re on high alert over the potential that they’ll get shut out of the general election thanks to the state’s unique election laws.

In conclusion, I ask for our Legal Insurrection fans to pray for California and not give up on us quite yet! 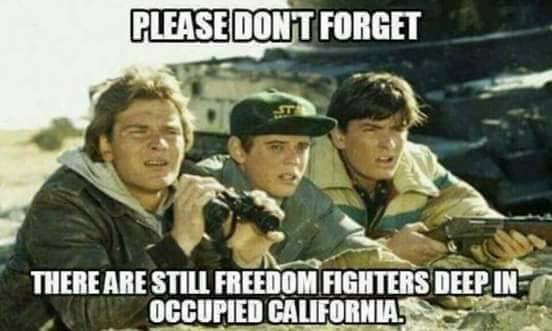 I wouldn’t place much stock in what Newsom’s saying now – he’s likely just trying to pitch a close race to keep his voters interested.

The interesting and pleasing part is the rise of Republican/conservative stock in California, andnot just in the histoically conservative areas.

California is a state, right? A US state? Or is it a planet? Seems more like a different planet.

Google comped Newsome its corporate 747 and Moffett Field aircraft birth as a wedding gift. Not payola. It looks like payola. But it’s not payola. A simple gift between old pals. Only stupid, feckless, alt-right teabaggerz think it an impropriety.

No punishment for corruption under Governor Brown:
https://www.uniondemocrat.com/opinion/5842253-151/no-punishment-for-corruption-under-governor-brown

Corruption and Collusion in California Labor Board:
https://www.forbes.com/sites/mattpatterson/2017/03/26/corruption-and-collusion-in-california-labor-board/#1607035124da

I was hoping to read the bus ran off the cliff. So disappointed.

You know somehow they would blame that on Trump.

Seldom has any culture, any country, any people so desperately needed an earthquake.

I was prepared to be all cynical but your Wolverines meme still has me laughing. Well played, poor thing.

Sending a care package this afternoon – 3 tins of beans, baby wipes, and a fresh AM satellite radio. Supposed to be waterproof.

But there must be a Blue Wave.

……….cause Dems are colluding with Canada to steal the mid-terms.

Read above and see.

“Having watched Trump for two years slowly take down one witless political opponent after another, and having got a feel for how he operates, I’m going to go out on a limb here and predict there will magically appear a massive scandal involving the Democrat party and the Obama administration, and it’ll come to light with uncanny timing to completely blow out of the water what little chance they had of doing well in the mid-terms.”

That sucking sound you hear is the Big Blue Wave going down the Little Chrome Drain.