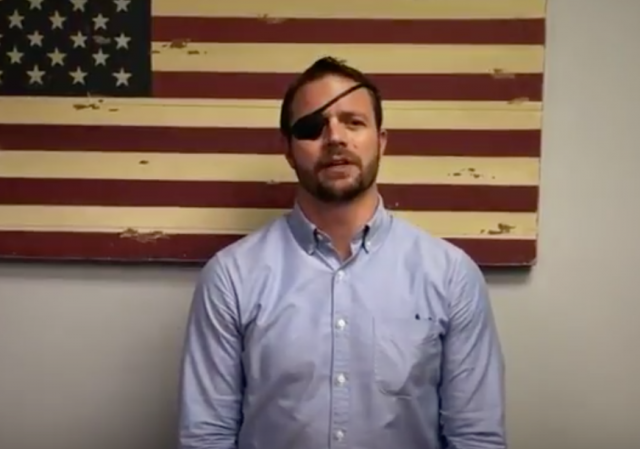 If you need a case study in campaign desperation, I’ve got one for you.

In the race for Texas’ 2nd Congressional District (encompassing much of north and west Houston, Kingwood too), soon to be vacated by the long-serving and retiring Rep. Ted Poe, Rep. Kevin Roberts has gotten downright nasty toward his Republican runoff opponent, former Navy SEAL Dan Crenshaw.

The two square off on May 22 when the runoff election will determine who moves forward.

An attack ad placed by an anti-Crenshaw PAC Conservative Results Matter (which appears to be the kind of PAC that bears a name not quite congruent with its actual purpose) conveniently left out Crenshaw’s unmistakable battle wound. Crenshaw wears an eye patch. During a tour in Iraq, Crenshaw lost his right eye when an improvised explosive device detonated.

Not only was the right half of Crenshaw’s face left out of the crazy ass ad, but there’s no evidence of an eye patch whatsoever. 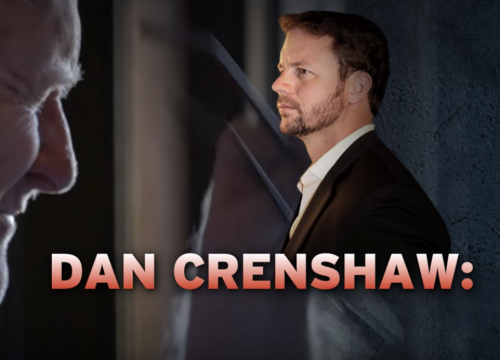 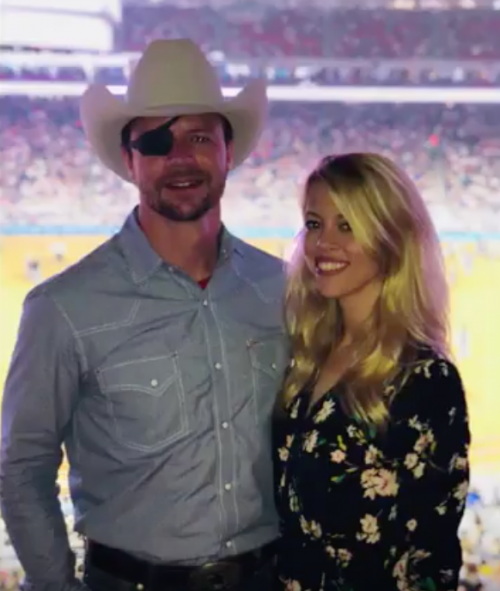 I can’t watch this without thinking of the Bobby Newport attack ad scene from Parks and Rec because this is all I’m hearing:

The Free Beacon with the down and dirty:

The attack parallels a Facebook post by Roberts, who in April shared a screenshot of an old Facebook post of Crenshaw’s and accused the SEAL of “openly attacking Donald Trump as an ‘idiot,’ ‘insane,’ and ‘ignorant.'”

Crenshaw denounced the ad as a “desperate strategy” and said the comments cited were “taken out of context,” Politico reported. He said the 2015 post represented an “aggressive defense of Christianity” after then-candidate Trump argued for a religious litmus test.

Crenshaw recently met with the Washington Free Beacon outside of Houston to discuss pressing national security issues like North Korea and immigration. Crenshaw, who served four months in South Korea before medically retiring in 2016, lauded Trump’s progress on the Korean Peninsula as “historic.”

Granted, the attack didn’t come from the Roberts campaign directly, but a Roberts-friendly PAC.

The exact same imagery was circulated in a mailer — eye patchless Crenshaw snuggled up with Bernie and Obama.

David Jennings at BigJolly posted a copy of the matching mailer: 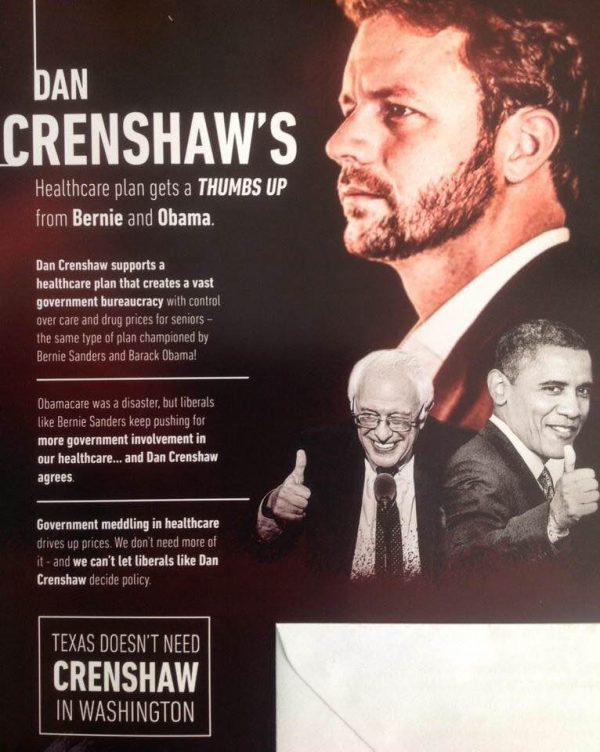 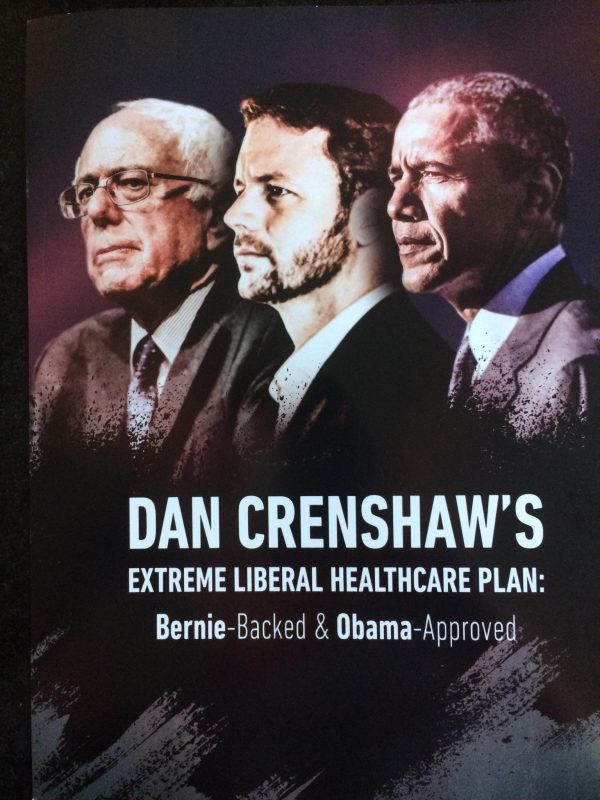 I mean, really. Who in their right mind is going to believe that a former Navy SEAL endorsed by former Governor Rick Perry would be touting a socialist health care plan? No one. That’s who.

According to Jennings, the PAC has dropped $141K in attack ads, “all paid to a firm in Maryland called Mentzer Media Services.”

Crenshaw has racked up plenty of solidly conservative local endorsements, including the endorsement of my dear, dear friends at the Kingwood TEA Party who say:

Dan is not only the right candidate in this race, underneath his courage, patriotism, and integrity beats the heart of a policy wonk who really knows and understands our conservative issues and principles.

And when he doesn’t know enough about a new issue? I can testify to his ability to find the people who do know that issue, learn from them, internalize the information, even as he catalogues it according to his & our principles—all while maintaining a fast-paced schedule of campaign visits throughout the District. Within a two week period, I saw him learn, assess, master the subject matter, at which time he presented the material at one of our TEA Parties, extending the argument by suggesting the 1st original plan to begin by dealing locally with an issue others saw as State- or even Nationally-oriented.

Lt. Commander Dan Crenshaw (Ret) is a capable young leader with a lion’s heart, a towering intellect, a heart to serve, and the courage to fight for his CD-2 constituents in the Swamp of D.C. The Kingwood TEA Party, Jim, and I proudly support Dan Crenshaw for Congress, CD-2.

Negative ads draw media (clearly, because here I am blogging about them) but they can also backfire. And that’s exactly what I suspect will happen here. There’s a fine line between a solid uppercut and the bizarrely reaching and crazy. This is definitely the latter.

Where in the world could they have gotten a photo of him without any eye patch – no strap on the head, etc.? It had to have been photoshopped.

Not only did they Photoshop out the strap, they gave him an eye socket and an eyebrow in portrait which are covered by the patch. This is really bad. If only they could Photoshop his vision back and get rid of the memories…

This Crenshaw guy is pretty amazing. After being wounded, he redeployed prior to retiring.

If I were him I’d learn a couple of Dr Hook songs for karaoke night.

This type of false flag operation used to be a rare and more subtle way of watering down the party coffee, but now it seems to be the most blatant and common go-to tactic.

The real losers are the electorate whose honest concerns get lost in all the mud slinging. No matter the results, tribalism simply entrenches itself deeper waiting for the next battle.

It was once said that all politics are local, but now that it’s twice upon a time, all politics are national thanks to super pacs & the ubiquitous ‘most important election of our lifetime!’

As Todd Erzen is fond of saying, “He who is dumbest last, loses.”

Somebody doesn’t know the rules have changed.

Exactly the reason why PACs suck and have ruined politics.

This PAC seems to smell …

This PAC seems to exist only to be anti-Dan Crenshaw

Papers for PAC filed bu Deanna Hayes (in Austin area) with an address of GrandSlamFinance.com in Towson, MD

Gee, I wonder if you dig into that PACs organizational structure how many Bush acolytes might you find??

I first learned about Mr. Crenshaw and his run for congress via the Jocko podcast. Definitely a worthwhile listen. The YouTube link is here, although you can get the podcast version on your favorite app, I’m sure. https://www.youtube.com/watch?v=71kbGdc1AIc

You are being used by the Crenshaw campaign. The photo without the eyepatch is from a Crenshaw mailer from his own campaign. I received one. There’s a lot of photos of him without it.

I trust the Washington Free Beacon, which first started the Trump dossier and is edited by Wee Willie Kristol’s son-in-law, about as much as I trust the Huffington Post.

I saw that mailer. It arrived to my mailbox yesterday.

I tore it in two and threw it in the trash can – where it belongs.

Silly PAC. I already made up my mind. And so have many of us in the 2nd Congressional District.

Lots of crap going on all over the spectrum. Take New Mexico………please.

I heard a brief sound-bite from a debate between Roberts and Crenshaw on Michael Berry’s radio program this morning, about 10:20 or so.

Roberts suggested that what voters needed was someone with “real world” experience, not some Ivy Leaguer with nothing in his background relating to the real world.

Crenshaw’s response with golden. He’s very articulate, and very effective. Look up the exchange for yourselves.

Substitute McCain or McConnell in there, and the ads would make sense.