“The conversation is in a very different place than it was last May.” 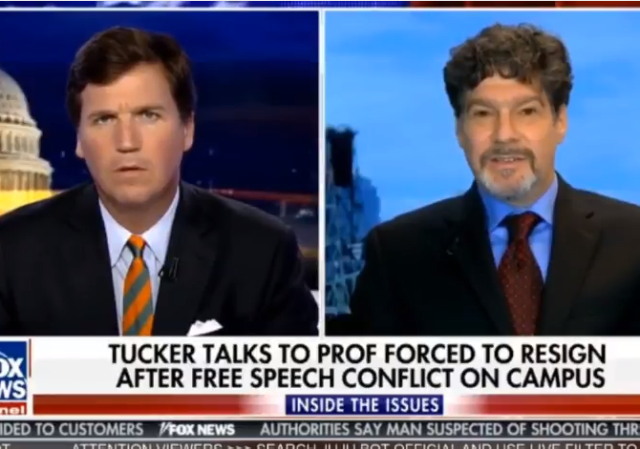 One year ago, a hostile takeover of the campus of Evergreen State College by students took place which is still adversely affecting the school today.

Students were participating in an event which would have driven white people off campus for a day. Bret Weinstein, a biology professor, who is also a progressive, refused to participate. Students verbally attacked him and called for his firing.

Weinstein was removed from campus for his safety, amid reports of students roaming campus with baseball bats.

Now a year later, Weinstein spoke to Tucker Carlson about what has happened since. Weinstein points out that the campus riots changed the conversation by casting a spotlight on the dangers of identity politics while creating unlikely alliances due to a shared belief in free speech.

He also notes correctly, that Evergreen State is now struggling financially due to a significant drop in enrollment.

Weinstein says that he was also vilified last spring for appearing on Tucker’s show. While he was trying to let people know what was happening, he was ultimately blamed for bad publicity.

A recent article in The Stranger describes what life was like for Weinstein and his wife who was also a professor at the school:

One Year Later, Bret Weinstein and Heather Heying Look Back

The campus, during that time, was crazy. After the protest outside Weinstein’s class, a small group of students took over buildings, stalked and accosted professors, and held administrators captive in their offices, refusing to let them leave. They roamed the campus with bats and batons, searching cars and buildings for Weinstein and others. Weinstein and Heying, their house just a quick stroll through the forest, were concerned for the safety of their two young boys, and they thought the administration was failing to address the simmering violence. That, Weinstein said, is why he decided to go on Fox News: He wanted to expose what was happening at Evergreen, and the liberal press just wasn’t calling.

Appearing on Fox News incensed many of Weinstein’s colleagues. They argued that by talking to Tucker Carlson, Weinstein had put the campus in danger, and 90 Evergreen employees signed a letter to the administration demanding an investigation.

Watch the new segment with Tucker Carlson below:

Hopefully, Evergreen State College will go bankrupt, thereby giving those who wanted Weinstein ousted a healthy dose of their own medicine.
We need to completely kill affirmative action, clearly AA no longer deserve such. They are bald faced hypocrites.
I assume that there is security footage which can be reviewed to identify those carrying bats, everyone of those people should be expelled, and other institutions should refuse to take them.

> I assume that there is security footage which can be reviewed to identify those carrying bats, everyone of those people should be expelled

Except that would all come from the college itself which is the root of the problem. So I’d expect no cooperation with the police and certainly no expulsions.

People vote with their wallets; I have little doubt they’ll continue to leave and the college’s financial position will become increasingly untenable.

It’s nice to see the liberal reaction to Prof. Weinstein going on with Tucker Carlson, it just cements the notion they are part of the problem and NOT part of the solution.

AA’s keep working really hard to convert existing Democrats into independents or to other parties. I bet when the dust settles, Weinsteins will no longer be Democrats.

Democrats still have not figured out that their outrageous positions on illegal invaders, Muslim invaders, medical coverage for those who do not earn such at the expense of those who do and a host of other issues is why Trump was elected and why there will be more people like him elected in the future.

Note that free market structure can remediate SJW/PC-caused problems too.

Not much about higher education is a free market with the exception of freedom to choose – both for students and donors. I’d say that about taxpayers, too, but there doesn’t seem to be much freedom around schools getting their “fair share” of state and federal tax dollars.

But the academic class realized the freedom to choose issue a long time ago, hence their stranglehold on how schools are administered. You can hardly find a person in leadership that hasn’t already been drummed out for not subscribing (to the “correct” thoughts). And the academics themselves have been in favor of this near totalitarian culture for well over a generation or two.

So the net result is that neither students nor donors have much of an alternate choice. If you don’t like Evergreen’s stance, you really have fewer options than you could count on one hand. Or maybe two hands. That appears to finally be changing as evidenced by some declining enrollment and perhaps one or two donors making public their reascending of funds. Hardly a tidal wave of change just yet….

“Not much about higher education is a free market with the exception of freedom to choose – both for students and donors.”

You took one sentence out of context. Too many of us stop at the theoretical point of choice. But when systems are manipulated, it is no longer so simple. As I say, when progressives remove choices through strict , zero-tolerance cultural enforcement on campuses, the concept of choice is moot.

These days I have choice in health plans, none of which meet 25% of my expectations. Manipulation.

The evidence is right there in front of you, atop this pile of comments. Evergreen went too far left and now their market – new students – is moving away, causing loss of revenue, lay-offs, and you can bet, changes in their political actions.

Now that those two obama goats are at Netflix, will Netflix go broke?

Today’s typically-aged college student, born approximately 1997, give or take 2 years, would be the offspring of late baby boomers and early gen-xers. What were the parenting practices of this cohort that produced this self-entitled lot?

We have a college age child. And my wife made a succinct observation about the child’s peers – The current college generation has at most experienced Bush 43-era and Obama-era political culture. They have been presented images of the drawling dunce versus the professorial messiah. Add in the successful and massive change in the educational system towards indoctrination over the past few decades as well as the reduction of politics purely to “feelings”, and it is easy to see how teens and twenty year olds view anything conservative or GOP related as foreign and repulsive. The Dems know their psychology. And people that age are very driven by emotion. Or “feelings.”

You are talking about the rank and file of our uniformed services here. People with whom I’d be proud to have served, as they are all volunteers.

We would do well to heed MLK’s advice: judge people by the content of their character, and reject diversity politics and bigotry (i.e. sanctimonious hypocrisy). Equal, not political congruence (i.e. “=”).

How likely would a personnel department be to consider a resume showing a degree from Evergreen?

If it is a Leftist SJW company, the Evergreen diploma will be a guaranteed hire. If it is a company with half a lick of sense, management has already ORDERED HR not to hire Evergreen graduates or students, along with other Leftist training grounds. Take their application, file the appropriate record copies, and round file the actual applications. They can file civil rights charges regarding race, gender, gender identity, skin color, religion, and national origin. Alma Mater is not included.

No one from any of schools like that can be trusted as an employee.

This said, there are pockets of good in the currently established system.

The market is beginning to respond, but very slowly since the currently established system has a strangle hold on accreditation and taxpayer funding.

Bullshit. The idea of a “core curriculum” only caught on a few decades ago, and is quintessentially elitist.

It holds that the university is charged with turning out “well-rounded” individuals, rather than serving its consumers.

It IS the reason that most undergraduate degrees now take 5 years instead of the customary 4 that used to be the case. “Core curricula” are larded with various elitist bullshit coursed now that are mandatory.

Ragspierre, Where would you be without profanity?

The original core curriculum in Western Civilization has been around for more than 100 years. Columbia is only one example. Theirs has certainly become corrupted.

“Ragspierre, Where would you be without profanity?…”

Obama without a teleprompter:

FU, SwineReports. I speak extemporaneously all the time in courts, and you don’t even know the definition of “profane”.

I was around thorough the “core curriculum” fad, and saw it first hand.

But you weak-assed reference didn’t address my core points; it is an elitists notion, and has cludged up…rather than “classify”…the process of, and time it takes to, take a degree.

I suppose it depends on what the Core Curriculum consists of. Do you consider studies of the Socratic dialogs and the Bible to be a “fad”?

Do you even read?

It IS the reason that most undergraduate degrees now take 5 years instead of the customary 4 that used to be the case. “Core curricula” are larded with various elitist bullshit courses now that are mandatory.

Do you consider elitist mandates a bad thing?

I sure as hell do.

The contemporary core curriculum has nothing in common with the classical core curriculum because of the influence of leftism. That is why the graduates of most of our universities have no idea what the basis of our society and the source of our freedoms are.

I think that’s what I said in the first place.

From your lack of recognition of the phrase “core curriculum in Western Civilization” it seems likely to me that your education, like mine, omitted this essential component. I discovered it about 30 years after graduating.

I consider the destruction of the core curriculum in Western Civilization by leftist elitists to be a very bad thing indeed. It was essentially complete by the 1960’s. What we have now is a core curriculum in leftist indoctrination.

As are almost ALL of them now.

The notion is elitist. Even if the elite wants to mandate courses in Western culture.

If you want a degree in a STEM field, you should take essential courses, and whatever electives YOU decide.

Personally, I think the entire Evergreen College debacle is the best thing that has ever happened to the Left. Clearly what happened at Evergreen is what the Left wants to happen everywhere. The ultimate goal for them is to shut down free speech, to issue edicts whenever they can concerning the most trite and trivial issues, and then demand horrific consequences for those who refuse to follow along. What they did at Evergreen is the blueprint for all of America should we allow them the chance.
>
The clear rejection by so many should show the Left the futility of their plans and goal. They, however, are incapable of seeing this which will be their eventual downfall. Clearly, the more the country sees of the Left with actions like those at Evergreen, the more the public is turned off by the Left. They are rapidly becoming victims of their own failure.

Well, here is the beginning of the end for the Left in Portland.

I suspect 2019 will be known as the year of WTF were we thinking?