Last week, I blogged about a poll published by Quinnipiac University. The poll showed the upcoming Texas Senate election as too close to call.

Sen. Ted Cruz has a formidable opponent in Rep. Beto O’Rourke, but no one in Texas believes the poll is close to reality. That’s not to say that running as a favored incumbent in a deep red state should be taken for granted though. We discussed that issue and more here.

There are several issues with the Q Poll.

As we discussed previously, I had several questions: 1) What’s the location breakdown of the poll, 2) how many polls were completed in English vs. Spanish (participants had an option),  3) why were independents oversampled? (self-described independents and unaffiliated respondents made up 46% of the poll), and 4) how many of these people voted in the last Senate election and for whom did they vote?

But those aren’t the only issues. The Texas Tribune explains:

The biggest is that the poll included a lot of Texans who have never been in a voting booth and likely never will be.

Also, this is a springtime poll. Lots of voters who actually will show up on Election Day have no more idea how they’ll vote on Nov. 6 than they know what they’ll have for lunch that day.

Second, this new poll was a survey of registered voters, as opposed to a survey of likely voters. The difference is immense. Texas has 15.2 million registered voters, according to the secretary of state. Just over 9 million voted in the 2016 election, and presidential elections get the biggest turnouts. In 2014, which was a midterm election year like the year we’re in now, 4.7 million people voted. The folks at Quinnipiac also noted that 53 percent of the registered voters in Texas didn’t yet have an impression of O’Rourke. He’s never run statewide, after all, never been on a ballot outside of El Paso County, and he’s not in the hot part of the campaign season yet.

That’s all pretty normal, but it tells you where the holes are in any early survey of this broad a pool of voters.

The Texas Politics Project at the University of Texas at Austin recently published a report that examined spring polling vs. fall voting in the state of Texas. Going back to 2010, National Polling outfits consistently underestimated Republican voters. 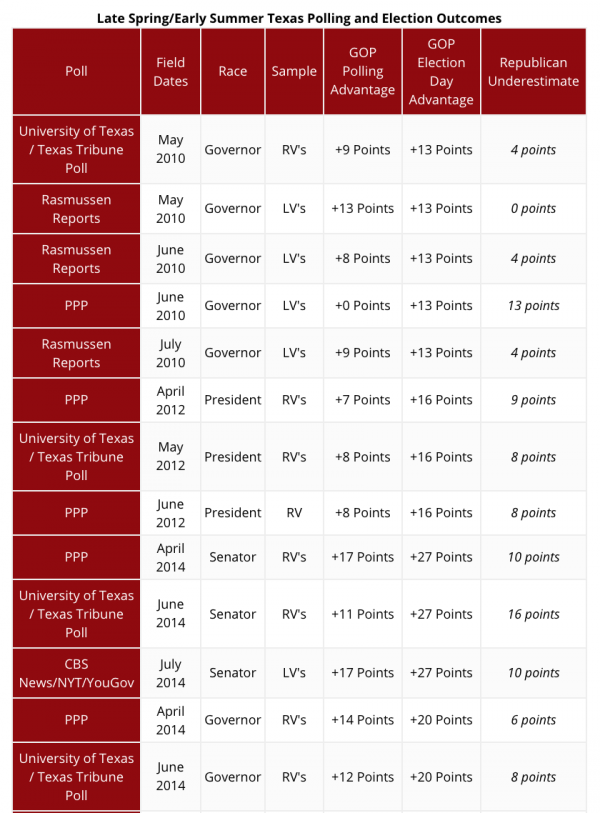 The quickest way to lose any race is to assume it’s already been won. Every race, even those that should be a shoo-in, ought to be treated like a battle. But this Q Poll looks like little more than media fodder.

My faith in “experts” and pollsters is pretty down the tubes.

I think polling has hit a problem with people moving to cell phones as their means of being reached. I know I rarely answer numbers that I do not know, and even fewer for area codes outside my own. I have done 3 polls in my lifetime, other calls I’ve gotten I’ve hung up on.

The model they have used in the past is breaking down, and while they probably get some idea of trends, it is getting tougher to get people to answer their polling calls. And some who do just give bogus answers. On line surveys are sketchy as bots and those who want to throw poll numbers off can and do invade them.

I don’t know what their answer will be, other than polling in person, and that has it’s own difficulties as it is usually tied to smaller areas which trend in group think.

What we learned about early polling and even exit polling with Trump is that most Conservatives and lean righters no longer trust the pollsters or the media and rarely are candid and truthful with them any longer.

Heck, I don’t even give the Census taker accurate information anymore.

There is no evidence for even this. So far as election prognostication goes, the polls reported in the press are mere noise.

This is not opinion, this is mathematics.

Gaussian statistics (there are others, but these polls pretend to be Gaussian) is a perfectly valid mathematical tool, if competently and honestly used. But the reported numbers themselves are all the evidence needed to realize that they are not competently used in politics. And of course nobody would be silly enough to assume they’re honest; after all, it’s politics.

The quickest way to lose any race is to assume it’s already been won.

And the second quickest way is to assume it’s already been lost.

That is the sole motivation behind the constant bombardment of the public with these clown polls; to make winners think they’re losers.

Every race, even those that should be a shoe-in,

These polls are ‘narrative building.’ The point is to show the Blue Wave is even down in Texas, ginning up leftys to vote in the midterms. Hopefully it will also gin up some conservatives to vote too.
If you’re a conservative, wherever you are, make sure you vote come any elections in the future! YOUR FUTURE WILL DEPEND ON IT! 🙂