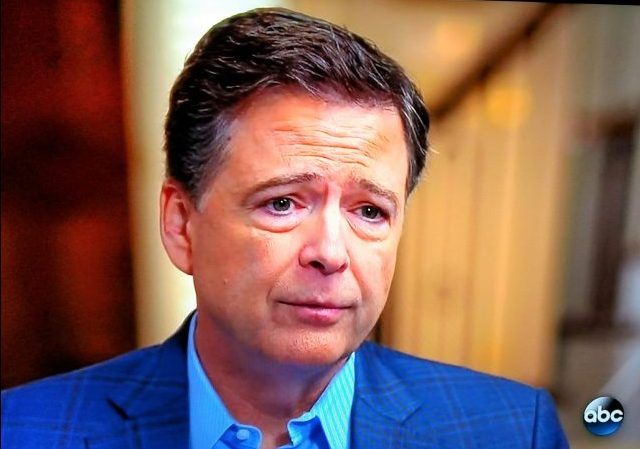 A poll released this morning by Morning Consult/Politico showed that two-thirds of voters (64%) did not watch any of the interviews that James Comey gave on ABC, CNN, MSNBC, and NBC.

The Washington Examiner noted that 46% of those who did watch favored him more after the interviews. 16% said their views of him went down after they watched.

Those numbers kind of surprised me because conservative pollster Frank Luntz conducted a focus group on Comey’s interview with ABC’s George Stephanopoulas which produced different results.

Yes, Luntz leans right, but he had Republicans and Democrats in the group who provided feedback while they watched the interview. Using hand-held dials, participants dialed up when something Comey said or did during his interview pleased them and dialed down when they had a negative reaction.

They had at least one thing in common: all were bothered by Comey’s claim that he didn’t remember where he was on Election Night. Several said he “lost credibility” with that response and another said he “looked like a complete moron.”

The two sides split when Comey brought up President Donald Trump’s appearance. The Republicans dialed very low while the Democrats dialed up.

One participant was bothered that Comey provided many details of Trump’s physical looks and not enough details on Trump’s leadership. Another man agreed with the first guy and said that Comey needs to get rid of the petty behavior.

Comey’s ABC interview aired before the others and only 9.8 million viewers tuned in. I say only because 22 million watched Stormy Daniels on 60 Minutes last month.

Instead, 12.1 million viewers chose to watch the Academy of Country Music Awards instead of Comey. Newsweek wrote that the Daniels interview came immediately after a NCAA tournament basketball game.

Comey’s book, A Higher Loyalty: Truth, Lies, and Leadership, sold 600,000 copies. That’s great and all, but a Forbes article said that the lack of viewers for the ABC interview is a warning sign that the book won’t be a blockbuster unlike Fire and Fury.

Another sign? Kemberlee blogged on April 18 that a book event at Dupont Circle Kramer Books had a ton of press…..and one “normal” person. From CNN:

“There are more cameras here than people,” one person joked.

Another journalist asked the room: “Is anyone a normal person or is everyone a journalist?”

Only one person — reluctantly — identified himself as a “normal person.”

“I wanted to see it for myself and read it, especially after Comey’s ABC interview. I’m more curious now,” said Matthew Hoeck, who was immediately approached by a handful of reporters in the room.

The 24-year-old, who would only disclose that he “works in politics,” came to Kramerbooks for “Fire and Fury” as well.

But the lack of lines at Kramerbooks doesn’t mean the former FBI director’s book is destined to be a flop. In fact, the publishing house, Macmillan, has printed 850,000 copies in anticipation of intense interest from the public.

It’s also already generated a ton of buzz and publicity, with Comey making his media rounds all week.

He did do better than failed Democrat presidential candidate Hillary Clinton. Her memoir What Happened only sold 300,000 in its first week. But that’s not her fault. It’s the patriarchy or something.

No one likes self righteous prisses. So, Yes!

thought you meant pantsuit – applies to both and comey-dian was supposed to be an adult – instead rhey both act like 3 year
olds who haven’t gotten their squeeze toys.

Unlike Sessions, who is appears to be more quiet about his corruption.

I personally reached Peak Comey in October 2016…but, then again, I am a leading indicatior. 😀 😉

Doesn’t Comeny come across as having many of the same traits as Hillary? Nothing is his fault, unjustified inflated ego and a liar.

And even if he had been fired in Jan 2017 as he well deserved, people forget that we would have had McCabe stepping into the position. (which we *still* did for a while)

The Press will continue to push even a dried-out mummy like the Mueller “collusion” rubbish whether there’s any sign of life in it or not. Ditto for Mr. Sad Clown Face.

In theory, they have ratings to earn. But some things—like Trump Derangement Syndrome—transcend money. At least for a while.

Has Comey started bottling and selling his own “whine” now?

Just a matter of time for his wife to see him for what he is and leave !!

Are Hillary and he having a contest to see who can whine the longest?

At 6’8″ Comey is tall enough to go screw himself.

“Has Comey peaked?” ??? Into the future? I am sincerely doubtful he needs to peek…it’s screams at him every hour of the day. Even right now, it’s my guess he’s working with his lawyer and accountant to get his private affairs in order…getting ready for a long extended ‘holiday’!

I sure hope his 3 daughters like their ‘new’ daddy as much or more than their old one. Life is fair.

Trump V. Comey…a clash of the two biggest egos on the planet, but only one oozes sanctimony like leaky oil from a 1949 Ford.