“There are more cameras here than people” 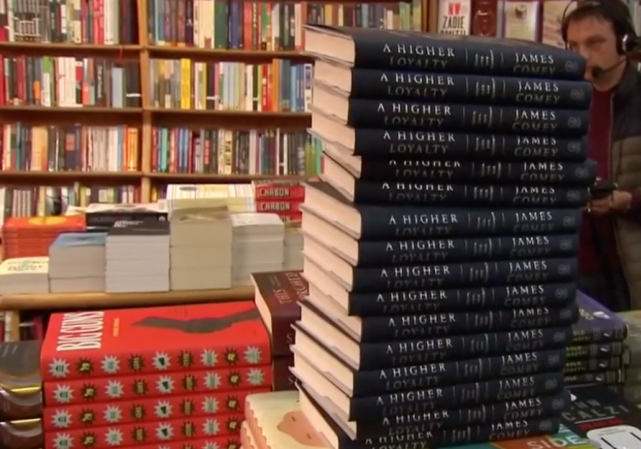 This is so perfect.

Former FBI Director Comey has been on one heckuva book tour promoting his tell-all drama, “A Higher Loyalty.” Comey’s been busy filming interviews on broadcast and cable news channels, chatting with radio hosts, but it’s starting to look like he’s preaching to the choir.

Here are just some of many cameras

One person asks: “Is anyone a normal person or is everyone a journalist?”
One guy reluctantly says he’s normal. pic.twitter.com/apAEmedSc6

This person is first to buy it and will be interviewed by us all pic.twitter.com/cG6wIQL9nr

“There are more cameras here than people,” one person joked.

Another journalist asked the room: “Is anyone a normal person or is everyone a journalist?”

Only one person — reluctantly — identified himself as a “normal person.”

“I wanted to see it for myself and read it, especially after Comey’s ABC interview. I’m more curious now,” said Matthew Hoeck, who was immediately approached by a handful of reporters in the room.

The 24-year-old, who would only disclose that he “works in politics,” came to Kramerbooks for “Fire and Fury” as well.

But the lack of lines at Kramerbooks doesn’t mean the former FBI director’s book is destined to be a flop. In fact, the publishing house, Macmillan, has printed 850,000 copies in anticipation of intense interest from the public.

It’s also already generated a ton of buzz and publicity, with Comey making his media rounds all week.

Even better, the mostly fictional “Fire and Fury”, which claimed to be an insider account of the Trump White House, was greeted with far more fanfare because it was a “sexier” story.

So where were the DC diehard politics nerds on Monday night? A few book buyers had theories as to why the line paled in comparison to Wolff’s release.

“I think people want an inside perspective on this administration,” said 25-year-old Phillip Carlisle, who was the first to buy a book. “People want drama.”

“I liked Wolff’s book a lot but he is not a trustworthy person,” he said. “Part of what made that so exciting is there were all these details coming out and you weren’t sure what was real and what wasn’t.”

As of Monday evening, Kramer Books had 600 copies of Comey’s book to offload.

So it seems that Scary Plotter doesn’t sell as well as Harry Potter. Who’d a thunk it?

Nobody showed up to buy the book written by mighty Zeus himself? Jordan Peterson’s book would be a better and more helpful buy.

Now I’m a believer!
KARMA is for real !

This thing will be in the remainder bin before July 4th.

Or the Dollar General by August. Hopefully.

In the tp isle

Or being shipped to Venezuela where Chavez and Madura have engineered a toilet paper shortage.

When Trump said he was going to drain the swamp… and then fired Comey. There needs to be a massive purge of executive subversives within Justice and the FBI.

Enemies, foreign and DOMESTIC has always had a meaning.

I have come to believe that without a doubt, these large book contracts to political Democrats are payoffs.

When you see the book deals that Obama and Hillary got, you can take that to the bank… well, at least they did.

I wonder why they choose this book store?

But then their is this:

For those looking for great gay hangouts, your best bets are the U Street Corridor, Dupont Circle, and Logan Circle. Stop in at Cobalt and 30 Degrees for the ground-level restaurant and attached gay entertainment complex, or go “old-school” at DIK Bar. If you want to go on a bit of a location hunt, cult favorite Green Lantern can be hard to find but is known for its welcoming atmosphere. There are also some excellent bars, including Bachelor’s Mill, in the Capital Hill area.

You know what they said about Hoover…….

Dude, Washington DC is only 10 miles on a side. Both the book store and Comet Ping Pong are in NW Washington DC, which is the rich part of town. You know what else is within 3 miles of the bookstore? The White House, all of the Smithsonian museums, the Capitol, FBI Headquarters and the Lincoln Memorial.

I can only imagine what your mind would come up with if Comey’s signing had been at Politics and Prose, which is something like two blocks from Comet Ping Pong.

That’s funny. “Politics and Prose” They did not want him there, that is Hillary territory.

The former Washington Post reporter and his wife, a former Hillary Clinton speechwriter, prevailed last year in a furious bidding war for liberal Washington’s most sacred space. Since taking over the bookstore, the couple has upped its profile, hosting readings and events featuring wonky celebs like Jeffrey Sachs, Thomas Friedman, and Michael Moore. As Franklin Foer, former editor of The New Republic, who also made a bid for the bookstore puts it: “It’s essentially the big church for elite Washington.” Pagans.

To the applause of customers, Bill Kramer stood in the bookstore-eatery he opened 22 years ago and announced he would fight Kenneth Starr’s subpoena for Monica Lewinsky’s book purchases.

“In fact, the publishing house, Macmillan, has printed 850,000 copies in anticipation of intense interest from the public.”

Interesting example of semi-fake news. While Macmillan may have ordered this many copies to be printed, they probably are not all printed yet. It takes a lot of time to make that many books. More importantly, there is no law of nature or Congress that says that actual sales will live up to the publisher’s expectations.

And you can bet from preliminary sales figures that the presses will suddenly be reloaded with a different book for printing today, and that original 850k will stop cold at whatever they have in inventory.

This will never ‘make’ the advance they most certainly paid.

Can they count e-book copies as part of that 850,000 number, or do they count as ‘published’ only when they are sold? ‘Pulping’ an e-book is much friendlier to the environment than the same for paper copies.

Good point. (checks) The Kindle version goes for $15, which is about pure gravy for the publisher and the author since no trees have to die to make it. (i.e. selling 800k hardbacks = far less profit than selling 800k downloads)

Still, I’ll stand by my bet that total sales in this year don’t go over 800k.

Putting aside union-buy “sales” and other padding, I’d be willing to be it will hit 100,000 and then the bottom will fall out of sales.

I’m sure his masters have a way to funnel funds through the publisher, just as they had for Hillary and Obama, to make sure they give their bought and paid for servants their pay.

Though on the publisher’s side, I would think they believed they were getting dirty secrets rather than lies for the cover up.

This is Occupy Wall Street all over again. Remember, where at several points there were LITERALLY more police and news people present than actual ‘protesters’.

What, Greg Packer wasn’t standing in line all night?

That ‘normal’ person looks like one of Woody Allen’s inbred love-children.

And he isn’t wearing one of those new style pink hats?

Perhaps there are no “normal” people in Washington, DC?

This is a good point. Hardback copies can be interpreted as virtue signaling (either in person or online). A portion of eBook sales can probably be identified as throwing support to a political fellow traveler.

I would be very interested in Amazon’s data on the Kindle version of many political books. I want to see how far people actually read these books. If at all.

They should be raiding McMillan Books. Also, if the book deal was discussed while Comey was still working for the government, that could be a violation too.

These book deals should really be considered payoffs for political favors.

Try reading the book. You all might learn something.
The revelations regarding the back stories of past events will make you ill.

That Comey is a crook?

LOL RE: “Only One ‘Normal Person’ Attended”

“Today Pat McKennedy, of Bugtussle, Oklahoma was reported as the “only one normal person” attending the Titanic Launch of the Comey book “A Higher Loyalty.” Asked what brought them out today, McKennedy stated they mistakenly thought it was a Starbucks that had a free restroom.”

When are they going to print these books on easy on the butt paper?

I’d rather buy Hildabeast’s book, and I’d only use THAT for toilet paper!

The parrots will probably revolt…