Because we never have run pop-ups/overs/unders or other types now blocked by Google Chrome.

We never have used pop-ups, pop-unders, pop-overs, autoplay audio ads, or any of the other type of ads that take over the screen to one degree or another. Particularly infuriating are the pop-up/over ads that have an “X” that makes you think you are getting rid of it, but in fact you are clicking on it.

Forsaking such annoying ads had its cost since they were the most lucrative. That’s a point I made during our semi-annual fundraisers in explaining the importance of reader donations. (See what I did there?)

I know that a lot of readers use ad blockers precisely because the worst offenders drove the need, something I wrote about in August 2015, You’re killing us – one ad block at a time:

I understand the urge to adblock. There are many big conservative websites I just won’t visit anymore because I’m bombarded with pop-ups, pop-overs, pop-unders, and click pop-ups. And then there are auto-run video ads, in a whole league of horrible all their own. Half the time, my computer freezes.

Adblockers are both a response and a cause of the problem. When fewer people view ads, the need to bombard the people who don’t use adblockers to make up the revenue increases. It’s a vicious cycle.

One way to avoid it is to put up a paywall and hope to drive revenue through a subscription model. Both of those models are of limited success, unless you are a unique media property like The Wall Street Journal.

We don’t use any of the above, and we suffer financially for that decision. We’re not part of a media conglomerate with investors and venture capital. A large percentage of our revenue comes from our relatively non-intrusive advertising.

We (I) would just like not to lose money. When you block our ads, it has a greater impact on us.

You no longer will need to use ad blockers to avoid the annoying ads if you use Chrome:

On mobile, ads that will be blocked include those with flashing animation, ads displayed before the content is loaded, and full-screen scroll over ads.

But the company said it won’t block all ads, only those deemed most intrusive by researchers at the Coalition for Better Ads. Over 40,000 people took part in surveys to determine the worst offenders.

Wired explains that running annoying ads that get blocked by Chrome can affect all ads on the page:

Google is essentially blacklisting sites that violate specific guidelines, and then trying to filter all ads that appear on those sites, not just the particularly annoying ones.

The NY Times notes Google’s self-interest in preventing the necessity for more comprehensive ad blockers, which would hurt Google:

But Google did not become the creator of the world’s most popular browser and a dominant advertising force by running its business in a manner that did not serve its own interests.

With the Chrome update, the company hopes to come out ahead by lessening the temptation of web users to install more comprehensive ad-blocking software. In other words, Google is betting that ridding the web of especially intrusive ads will render it more hospitable to advertising in general — and more profitable for advertisers and Google itself….

Chrome will not block ads that run before videos on sites like the Google-owned YouTube, for example. Such ads, which can be blocked by Adblock Plus, lay outside the scope of the recommendations made by the Coalition for Better Ads.

We’re okay with all this. Because we never used the type of ads blocked by the new Chrome feature.

And we pass the test: 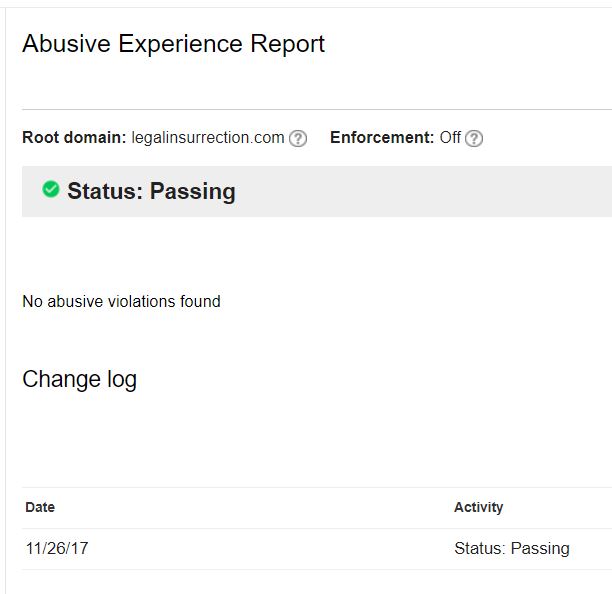 Featured Image: You are surrounded by your white male privilege

Your donation form refuses to take my phone number as entered but the donation went through anyway.

I kind of enjoy the annoying ads. At least, deleting them repeatedly while screaming, “Die, you filthy bloodsuckers!!”

I’m a longtime reader of your site and a longtime user of AdBlock Plus. However, after reading this post, it made me slightly proud to not have to feel guilty about blocking your site considering it’s one of a very few that I unblocked a long time ago.

Congratulations on continuing to run an awesome site and keep the ads coming. I don’t mind. 🙂

There are many sites that are just flat unreadable without AdblockPro. You may be able to get a line or two down a paragraph before *zing* You’ve won an iPad or such on a fresh, new screen that won’t let you ‘Back’

I’m willing to bet those sites will find ways to punch through Chrome’s built-in blocking in about a day, maybe two.

There are some sites where, with Chrome (I have an Adenoid phone), I get these alleged “Amazon” you-are-the-10-thousanth-viewer things at two sites. using Brave, I do not.

I should try those sites again with the new Chrome, but hold no real hope the issue is gone.

Between amy schumer, this screaming hadrian, rosey o’donnell: the left seems to have a monopoly on the porcine.

There are also those “Would you like us to send you alerts? (Accept / Decline).” Probably not affected by this Google thing-y.

i only use firefox –

i have VERY poor vision and the FF addons have various helpers to reverse colors and such.

as far as adblock, unless you have adhd. you just can’t read postings without wanting to throw something at the screen.

LI is my daily fitst AM internet read – THANK YOU AND ALL THE CREW FOR SANITY IN AN INSANE WORLD.

as much as i loath DisQus, the options to re-edit a comment and block users is a definite plus, just saying, due to my vision issues i frequently make spelling errors and only spot them after posting – even with Preview.

Love the picture used of the triggered Pajama girl,LOL !

Here’s a little factoid for you. Out of the entire WWW, the very first site which inspired me to try those new-fangled adblock things was … wait for it … Legal Insurrection. The damn pages simply wouldn’t load in anything less than geologic time. And I could tell exactly why. The browser I was using at the time—I don’t recall exactly which one it was, some now-obsolete version of Opera or FireFox or Explorer—would tell me what it was waiting for; and that was invariably some stupid ad. Stop the ads, and the ridiculous delays stopped as well. It was damn magic. As a bonus, those disgusting closeups of medical conditions which used to appear in the clickbait ads right in the center of the page also disappeared. They weren’t crippling load times, they were just gross. The stupid ads on the sides of the page don’t bother me and don’t seem to cripple load times.

Ad blockers are the best thing I’ve done for my own “quality of life” enhancement since I put Pachmayr grips on some of my more uppity revolvers. No way am I going back—I’m far too old to enjoy pain and spurious inconvenience for its novelty value.

Chrome does not block the Powerline blog’s obnoxious pop-up ads.