When Newsweek Ripped off The Onion: An Insider’s Account of Newsweek’s Decline

When Newsweek Ripped off The Onion: An Insider’s Account of Newsweek’s Decline

Choosing outrageousness over fact has consequences 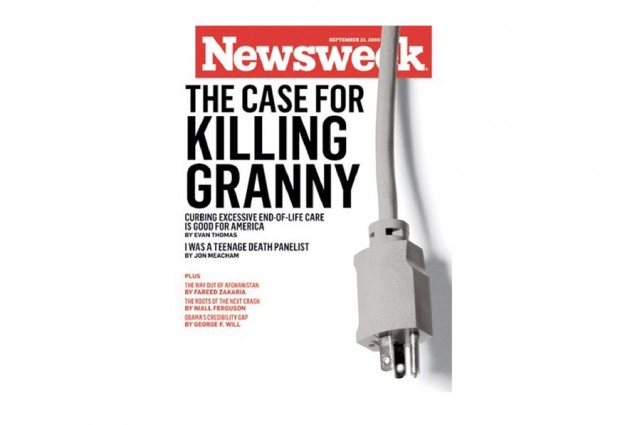 We’ve cataloged the bizarre implosion of the once great Newsweek.

Just a few years ago, Newsweek ceased printing but was resurrected when a religious cult leader purchased the publication. Since then, Newsweek has suffered embarrassment after embarrassment, publishing a steady stream of fake news, conspiracies, and inaccurate information.

An office visit from the Manhattan DAs office, as well as allegations of ad fraud, were the icing on the cake. Or should have been.

Earlier this week, Newsweek suddenly fired a handful of high-ranking executives as well as a reporter, leaving the remaining staff shaken.

The firings were the last straw for Matthew Cooper who resigned and shared his thoughts on the struggling publication at Politico Thursday:

It was 3 a.m. on Saturday, and I was seething. Staring at my phone, I saw that my company, Newsweek Media Group, had put out yet another story that would require a correction if not a retraction. This time it was a story ripped from The Onion. We were treating the fake news as if it were real. OFFS, I tapped under a friend’s Facebook post after seeing it, short for Oh, For Fuck’s Sake. The headline in our sister publication, the International Business Times: “Meghan Markle and Prince Harry Set Up Wedding Registry at London’s Target.” Despite the late hour, I dropped a note to an editor who took the story down off the website. You can see the link on Google, but if you click, you’ll get “Error 404. PAGE NOT FOUND.” There’s no correction, which is what a normal news company might post.

It would be funny if there hadn’t been so many insane errors in recent months. An article in Newsweek on the girlfriend of the suspected Las Vegas gunman breathlessly purported to have discovered that she was married to two men simultaneously. (Not true.) One piece touted a new poll in Japan that showed its citizens were eager to go to war with North Korea—a startling headline that raised alarms in a region fraught with nuclear tensions, and where Tokyo’s occupation of the peninsula during the Pacific War is still raw. (Oops. Not true.) President Donald Trump can defend himself, but Newsweek ran a story following Charles Manson’s death that was both banal and a slur: They both use words to influence people. It had to be walked back. One of the most embarrassing for me as a political reporter is a story from January 2018 announcing that Hillary Clinton, she of the 2016 election, could still become president “if Russia probe finds conspiracy evidence.” What followed was a farfetched theory of Trump’s removal and Mike Pence handing the reins to Hillary, which seems a tad unlikely.

All of this was pretty demoralizing. I’ve spent more than 30 years in journalism—more than half of it at what were once the big three newsweeklies—Time, Newsweek and U.S. News & World Report. (As far as I know, only one other person, Steve Smith, who also edited the Washington Examiner and National Journal, has managed this hat trick.) But the errors, which overshadowed Newsweek’s very good work, were only part of my middle-of-the-night fuming.

…Then on Monday, February 5, I reached my tipping point: The two respected editorial leaders of Newsweek, Editor in Chief Bob Roe and Executive Editor Ken Li, were summarily fired along with a strong reporter who was investigating the various Newsweek scandals. It was too much tsouris for me. I submitted a letter of resignation, probably marking the last time I work for a newsweekly. It’s possible in a few years, no one will.

Asked a Newsweek insider about that Trump/erectile dysfunction story

There’ve been countless pieces grieving journalism’s transition into click bait. Newsweek ought to be a cautionary tale for many a publication who choose outrageousness over fact, but I’m not so naive as to believe we’ll see that anytime soon.

I don’t recall the Newsweek of which he speaks so glowingly. It’s always been biased as long as I can remember. The difference was that at least they were good writers chosen because they had the “right” politics. Those with the wrong point of view need not apply.

In fact everything has been infected that way for as long as I can remember. Hollywood, Media, Academia, radio. The Internet showed that there are many good writers, intellectuals, speakers, comics, singers and artists who don’t share the group-think, they just didn’t get through the starting gates.

I doubt there is a publication around that is NOT biased. The days referred to were when Newsweek articles were written well, grammar was good, and there were words of more than two syllables. They also ran articles about important topics, not “Is Your Baby Racist?”

Didn’t Milton Friedman use to have a column in Newsweek? Of course that was before my time.

I believe at one point yes he did, but also remember that was a very different Newsweek with completely different owners.

Yes, Milton indeed. And the former conservative columnist George Will – eagerly anticipated every other week back in the day.

may ALL of the MFM suffer a similar fate.

Employee upset Snake Oil Inc was run out of town. I’ll be at the saloon looking for sympathetic folk to interview.

Oh no. He just walked in the joint.

How can a “journalist” be so out of touch with reality that he saunters in and says “You guys were asking for a rope? Here, use mine…”

There is always an extreme example of what is considered “normal” behavior in any group. Newsweek is just filling that role.

How exactly does one earn the accolade of ”respected editorial leader” of a fake news magazine which is so bad it embarrasses its own staff?

Hey, you can’t blame newsweek for this. They took their stories from schumer, pelosi, schiff and cummings. How were they to know?

/sarc, because rags and yellow-lizard-without-legs can’t tell the difference.

Then on Monday, February 5, I reached my tipping point:

Really, it took that long? What kind of “reporter” would actually keep up with the fake news for that long?
Answer is none. Which tells us more about this guy than anything else he wrote.

It was their names that were on the fake news articles.

Not the editors who “made” them do it.

How much did were they being paid to destroy their own reputations?

Oh well. They’ll fit right in at the New York Times with that resume.

I’ve spent more than 30 years in journalism—more than half of it at what were once the big three newsweeklies—Time, Newsweek and U.S. News & World Report.

Hmmm, you know, maybe somebody should be seeing pattern….

The other side of this equation is why we have “clickbait” as an avenue at all: Facebook, Twitter, etc.
Social media is poison.

Fredo Corleone Shocked To Find Gambling At This Establishment.

Fact is, Newsweek was ALWAYS a distant second to Time, so as the legacy dead tree media has taken its hits from digital media, it was always a matter of when not if Newsweek would go under.

One would have to go back prior to 1970 and perhaps further to find a functional mix of pro right and pro left periodicals and dailies.

And even with that balance they all still jumped on the same bandwagons just with a slightly different viewpoint.

And over the years the apportionment became more and more left as the JD’s coming out of the ’60’s and ’70’s classes were imbued with the “Gotcha” spirit and the hope that they too would get to bring down a President of the US.

They became journalists to “make a difference” not to tell a story about an event or present the facts of same so it could be understood by the outsider citizen.

No they wanted to make a difference and they were going to do that if it killed their publication or made their customers uncomfortable.

Thus the increasingly partisan viewpoint and then the declining readership. Most people can get sermonized for free at home or at church they don’t need to pay for the privilege.

And that’s what’s already happening to Hollywood. Too much preaching and to little entertainment and zero respect for their customer.

I, too, once worked in journalism. Back at that time Newsweek, Time, U.S. News & World Report, and The Wall Street Journal were reputable news sources (or at least my naive self thought so). And, at that time, Vermont Connecticut Royster was still the editor of WSJ (I’m showing my age here, Mr. Royster retired in 1971).

These days, the only print news source that I find to be reasonably reputable is IBD {that’s Investors’ Business Daily, NOT Inflammatory Bowel Disease [Crohn’s and/or Ulcerative Colitis]).

We have here a ‘journalist’ who just cannot stand the environment any longer. He goes through his litany of stories that had to be walked back, and his regrets at the crappy nature and origin of them.

Then he throws in the little gem “President Donald Trump can defend himself,…”

So he is willing to bemoan the fake news aspect of every such story – except for those the besmirch the President.

Sorry buddy – with that attitude you told me loudly and clearly that you, too, are not a journalist, but that you are merely another agenda-pusher. I can only conclude that all of your tears are because they aren’t pushing your agenda.

Newsweek is the most obvious and glaring example establishment imprints adopting the Buzzfeed click-bait model of “news” reporting, but Time is not that far behind. As bad as Buzzfeed is, I think they’ve actually managed to eclipse the newsweeklies in quantity and quality of actual original news content.