To quote Trump, the whole ordeal is just Sad!™ 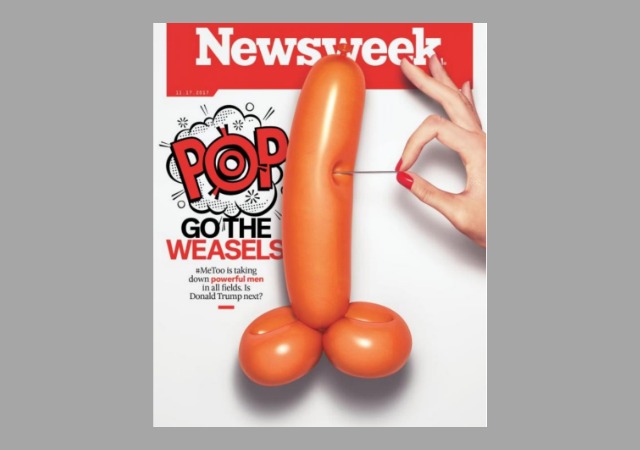 Newsweek’s fall from respected publication to tabloid trash has been a remarkable and sad spectacle.

Like many other print publications, Newsweek struggled with reduced circulation when online news became the preferred medium for news consumption. In 2012, Newsweek printed what was supposed to be its last edition.

That was until it was bought out by the International Business Times in 2013, an online publication with shall we say, very strong connections to a Korean cult leader who fancies himself the second-coming of Christ.

In 2014, Newsweek was able to recruit a handful of respectable journalists and resumed print.

And it’s rapidly rolled downhill ever since.

"My dad’s not racist! He only cares about money," Eric Trump says as he defends his father on Fox News https://t.co/4YE6xbgkCB pic.twitter.com/KT3e7wDLXr

What he really said:

“My father sees one color—green. That is all he cares about. He cares about the economy. He does not see race. He is the least racist person I ever met in my entire life.”

Insider reports suggest that life at Newsweek is just as bad behind the scenes as the garbage they publish suggests:

Asked a Newsweek insider about that Trump/erectile dysfunction story

And then the cops paid a visit

As if all of that wasn’t bad enough, the Manhattan DA’s office rolled up to Newsweek’s headquarters last week with a search warrant.

About two dozen investigators from the Manhattan District Attorney’s Office converged on the downtown newsroom of Newsweek on Thursday — taking photos of computers and servers, sources said.

The investigators, who arrived shortly before 8 a.m., focused on the computers’ serial numbers — and walked out six hours later carrying several of the servers, sources said.

The probe is believed to be connected to Olivet University, the San Francisco school tied to the controversial South Korean evangelical pastor David Jang, one source said.

Jang has close ties to the founders of IBT Media.

A lawyer for the company, in a brief talk to shaken and mystified staffers roughly halfway through the raid, said the police action was part of a 17-month investigation.

“People are very upset, because apparently there was a 17-month investigation and no one told us anything,” said one person close to the company.

Late Thursday, Newsweek Media Group acknowledged that agents from the DA’s office had been searching their servers for the better part of the day.

“The company provided the DA’s representatives with access to the computer servers on location to allow for a technical inspection within the law.

“No information regarding the company’s content, stories, personnel, or sources was given and Newsweek Media Group has been assured by the DA’s office that the investigation is not about any content-related issues,” the statement said.

To quote Trump, the whole ordeal is just Sad!™

There was a time (long ago) when Newsweek was a respected publication. For at least the last 15 years, it has been nothing but left-wing propaganda. The same is true for Time Magazine.

“There was a time (long ago)” when I was a subscriber to Newsweek, Time and U. S. News and World Report. That was over thirty years ago.

“There was a time (long ago)” when I read both (later one) of the San Antonio daily papers. That was over twenty-five years ago.

“There was a time (long ago)” when I would keep CNN on all but 24/7. That was also over twenty-five years ago, and I completely cut the cable – and all so-called mainstream media – ten years ago.

The computers were cataloged as part of an IRS lien.

Newsweek, welcome to the “99 Cent Store” of news. (You’re on the shelf just left of the NY Times.

notamemberofanyorganizedpolicital in reply to TheFineReport.com. | January 23, 2018 at 2:30 pm

The buyer got taken!

re: “In 2012, Newsweek printed what was supposed to be its last edition.”

Typical liberals, writing big checks with their mouths but refusing to cover them.

Newsweak is now a site in desperate need of “click-bait” to make payroll.

and peddle a five-month-old conspiracy theory that Hillary could still become president.

It’s not a conspiracy theory, and I can’t imagine how you could come up with that label for it. It’s a scenario that was and remains perfectly possible, but extremely unlikely.

In fact it’s more complicated than it needs to be. The most straightforward way for Clinton to become president is for Pence to resign, Trump to nominate her as his new vice president, Congress to confirm her, and then Trump to resign. In other words the same way Ford took over from Nixon. There’s no need to involve Ryan at all.

The flaw, of course, is that there’s no way on earth that Trump, Pence, or Ryan would agree to do something so stupid. But sure, if they all went insane they could do it.

There’s a far easier and much more likely way for Hillary to become President. And that’s for Jesus Christ to return to Earth, institute the millenium and for Him to point to Hillary and say “Yes, She Shall be my New President.” And when she says “wait can’t I be Pope too?” He’ll say “Okay, you can be Pope too.”

Sorry, there is no place in the US constitution for your chosen god to make any appointments. The first amendment forbids the US from taking direction from any god, including yours.

I’m sorry your sense of humor was surgically removed. Sad!

Ever meet a lib-tard with a sense of humor? Neither have I.

Yes there is: the 42nd Amendment:

“Section 1. If Jesus Christ returns to Earth, and henceforth institutes a millenium and for Him to point to Hillary Klinton and say “Yes, She Shall be my New President,” Hillary Klinton shall be President, but only upon the condition that Hell has frozen over, all pigs on Earth can fly and barack obama was actually discovered to have been a Constitutional law professor.”

“Section 2. If, by the time Jesus Christ returns to Earth Hillary Klinton is still alive, the Executive is authorized to send a representative back in time to shoot her.”

In other words the same way Ford took over from Nixon

Ford and Nixon were both Republicans. To swing another regime change the “same way”, the President would have to be succeeded by some rapacious, corrupt, and criminally-inclined Republican. And while such a Republican might not be too hard to find, it certainly couldn’t be Hillary.

“Like many other print publications, Newsweek struggled with reduced circulation when online news became the preferred medium for news consumption.”

The leftists took over the print publications so people HAD to go elsewhere, like online, for actual news. The left destroys everything it controls whether it is Newsweek, Venezuela, Europe, or the economy.

I do not feel sad NW is only a curb-height over a sewer — they earned it. The left only knows how to destroy. What good have they ever built except comfort for the ruling class?

Why does Newsweek have a penis on their cover?

Because reducing people to a body part is what the left does. See also: pussy hats.

It’s not a “penis”. It’s a well-formed clump of cells, which may or may not have been Planned.

Its Part ll of their: ‘madam president’ feature: highlights on bill clinton.

They can still keep the old issues out. Just as they do now.

As unreadable as ESPN is unwatchable.

I wonder if this is why selective-child is a moral imperative for the left-kind.

Objectifying women, men, and babies, too.

What color of diversity is that phallic object?

Until recently, disgraced former NY Times reporter Kurt Eichenwald was Newsweek’s “star” reporter. A year ago, I and a couple of other people noticed that Eichenwald was bragging on Twitter about being a victim of Anthrax. This was a lie. He was never exposed to Anthrax. I wrote to Newsweek’s executive editor, documenting his lies. I never received a response.

You should have coated the letter with anthrax.

Sadistic. It must be an homage to #myChoice

What would Freud say about that Newsweek cover?

“Vell, it eez clear to me that leftist vomen, who haf been enabling perverted men to support them politically, are not so vell. You vill notice the rage demonstrated by the female hand piercing zee fake penis balloon on za cover of a vorthless magazine mit a pin: zee female who is seeking to mutilate zee male genitalia as represented by zee fake penis balloon is nuts, and always vill be. Za only place for her is za ‘Vomen’s March.’ Ziss iz der best election EVER!”