“a chance to promote a liberal agenda with voters” 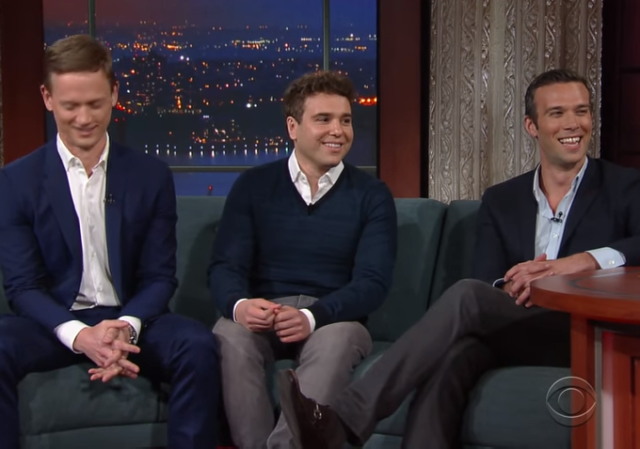 Former Obama staffers Jon Favreau, Jon Lovett, and Tommy Vietor have been doing a podcast for months and now they’re headed to HBO. They’ve been signed to do a series of specials in the months leading up to the 2018 midterm elections.

HBO, already the home of Bill Maher, has taken another step to the left by signing a group of former aides to President Barack Obama to create a series of specials.

“Pod Save America” co-hosts and Crooked Media founders Jon Favreau, Jon Lovett and Tommy Vietor will create a series of hourlong specials from the campaign trail to coincide with the 2018 midterm elections. Favreau, Lovett and Vietor are former Obama staffers who were often referred to as the “Obama bros” during their tenure in the White House.

They have since launched Crooked Media and host the popular anti-Trump podcast “Pod Save America,” which will hit the road leading up to the midterms – giving the hosts, and now HBO, a chance to promote a liberal agenda with voters.

“The best part of ‘Pod Save America’ is taking the show on the road and meeting activists, candidates and people who are getting involved in politics for the first time,” the trio said in a statement. “They know that the 2018 midterms are the most important elections of our lifetime, and the energy and excitement on the campaign trail is infectious. We are so grateful that HBO is taking a chance on us.”

You may remember Jon Favreau from his famous cameo groping a cardboard cutout of Hillary Clinton before the 2008 election. This sort of thing was considered acceptable back then, as long as you were an Obama supporter:

Tommy Vietor is best known for responding to a question about Benghazi on FOX News by saying “Dude, that was two years ago.”

@gloriaja2012 No Tommy Vietor.”Dude that was two year ago.” re Benghazi. Confirmed Obama not in Sit Room that night. pic.twitter.com/aGcTZrZaUr

Jon Favreau and Jon Lovett also made an appearance on the Charlie Rose show in 2016, during which they laughed about lying to the American people about Obamacare. From the FOX News Insider:

PBS talk show host Charlie Rose shared a hearty laugh with President Obama’s speechwriters about an oft-repeated talking point the president used to pitch Obamacare which turned out not to be true.

Speechwriter Jon Lovett was telling Rose that he was most proud of the serious speeches he worked on — “health care, economic speeches.”

That led fellow speechwriter Jon Favreau to interject that Lovett wrote the line about “If you like your insurance, you can keep it.”

Lovett then shot back, “How dare you,” causing the roundtable to erupt in a fit of laughter.

If this triumvirate of experts is the brain trust of the Democratic Party, the 2018 midterms might be less competitive than reports indicate.

“Remember Jon Favreau, Obama’s not fired, but instead promoted to White House top speechwriter, groping, along with another Obama fratboy creep a cardboard cutout of Hillary Ciinton?

Remember Obama’s top internet guy, 24 year old Chris Hughes? Hughes was “one of four founders of Facebook”. This week we learn, via Aaron Sorkin as he defends the woman hate displayed in his latest film about the founding of Facebook, about Chris Hughes and his frat-boy friends…

“…went to boarding school at Andover, where he joined the Democratic Club and the student government. In the fall of 2002, he went to Harvard, where he majored in history and literature. He and a roommate, Mark Zuckerberg — now the chief executive of Facebook — shared a room that was “just about as small as my cubby at work is these days,” Mr. Hughes said.”..

“Now do you get it? Misogynist Hughes joined his fellow women haters at the Obama campaign because like goes to like. Creeps of a feather flock together – whether at Harvard or now at Obama’s Dimocratic Party. “Obama did not fire Favreau because they both harbor a full share of sexism and misogyny.” ..”

It might not have been Favreau, Vietor, or Lovett.
But it was one of those Obama’s Top Staffers – you know, those elitist, Frat Boys, close to him – that was caught tea-bagging on film. It amounts to more than tea-bagging. The Obama Staffer was racially, sexually harassing a black male college student who had passed out on a couch, by tea-bagging him.

“Far less has been said about Obama’s winks to patriarchy. I believe his “waving teabags” remark was just that. There have been others. Most notable was his interview with Katie Couric. He answered that The Godfather was his favorite film of all time (“this combination of old world gentility and you know, ritual with this savagery underneath”). It might sound ridiculous but publicly announcing one’s love of mob movies, no small feat for someone aspiring to the presidency, has become shorthand for declaring yourself part of the vicious generation, where even blog rebuttals are considered “takedowns” akin to bitch slaps and teabaggings. To be sure, Obama knows how to speak Rapist. Unlike his Black constituents, however, it’s unlikely he’ll ever sell rapists down the river.”

RE: There was a photo of that, however I see the Evil Ones have been busy as can bee scrubbing the Intertubes……

I wonder how much soy milk these three consume daily.

Why do you assume they’ve been weaned?

The saturation of GOP hatred in entertainment will backfire. Especially since it has not depth. How many times will voters want to hear screams of Racist Racist Racist before they tune out? Most are already beyond their limits.

Although this will probably be targeted at Millennials and the usual HBO audiences, I still question if it will have any impact on elections given how tired most people are who aren’t already unmovable Dem voters.

Moe, Larry and Curley will be surpassed by this trio.

So, HBO sees $$$ signs in giving these 3 pajamaturds a bigger microphone and camera.

Ok. It’s just another reason to cut the cable….

notamemberofanyorganizedpolicital in reply to locomotivebreath1901. | February 10, 2018 at 5:46 pm

They’re being flushed down the….. along with Obama and Hillary.

TheFineReport.com in reply to notamemberofanyorganizedpolicital. | February 10, 2018 at 9:00 pm

Now that klinton has been de-fanged, it’s obvious why Gergetown nonetheless paid this money: much of it is being kicked-back.

But to who? To Georgetown administrators?

The students are getting a lesson of their lifetimes, if they’d just open their eyes.