Warren tries to reset the media narrative to one in which Warren was not an exploiter of Native Americans, but their champion — My appearance on the Dan Rea Show. 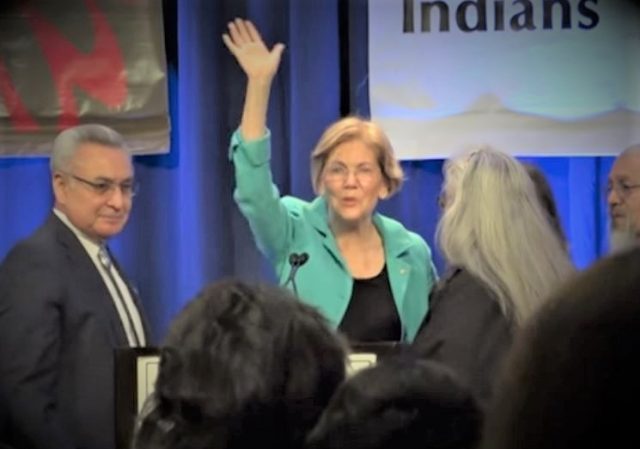 There is nothing spontaneous about Elizabeth Warren’s political career. Much like Hillary Clinton, Warren is very calculating and contrived — she doesn’t interact much with the press except in controlled situations or with obviously friendly media. Warren obsessively stays on script and sticks to talking points.

Nowhere has the Warren Way been more evident than in how she has handled her Cherokee/Native American problem.

She and her extensive campaign apparatus careful managed her message after revelations that she claimed Native American status for employment purpose without factual basis. Since the story broke in late April 2012, Warren has tried to portray the problem as people attacking her family, rather than Warren’s own conduct.

The way in which the speech happened was very thought out. Warren’s appearance was not announced in advance, she just appeared. That surprise element allowed Warren to control the narrative without distractions such as Native Americans protesting her appearance or presenting counter-narratives.

The centerpiece of her speech was her parents, portraying those who question her narrative as trying to deprive her parents of their history. She also repeated the largely debunked story of her parents’ elopement and again claimed her mother was part Native American despite all the genealogical evidence otherwise:

I get why some people think there’s hay to be made here. You won’t find my family members on any rolls, and I’m not enrolled in a tribe.

And I want to make something clear. I respect that distinction. I understand that tribal membership is determined by tribes — and only by tribes. I never used my family tree to get a break or get ahead. I never used it to advance my career.

But I want to make something else clear too: My parents were real people.

By all accounts, my mother was a beauty. She was born in Eastern Oklahoma, on this exact day — Valentine’s Day — February 14, 1912. She grew up in the little town of Wetumka, the kind of girl who would sit for hours by herself, playing the piano and singing. My daddy fell head over heels in love with her.

But my mother’s family was part Native American. And my daddy’s parents were bitterly opposed to their relationship. So, in 1932, when Mother was 19 and Daddy had just turned 20, they eloped.

While her parents were used as the shield for Warren’s conduct, Warren also took a more strategic-level messaging: Warren did a bear hug on the legacy of Pocahontas (the name Trump uses to mock Warren’s claim to be Native American), and attempt to take a political branding liability and turn it into a positive:

If there were a single major theme, it’s that Warren now is the champion of Native Americans:

So I’m here today to make a promise: Every time someone brings up my family’s story, I’m going to use it to lift up the story of your families and your communities.

Your story is about contributions. The contributions you make to a country that took so much and keeps asking for more, contributions like serving in the military at rates higher than any other group in America.

It is a story about hope. The hope you create as more Native people go to college, go to graduate school and grow local economies.

It is a story about resilience. The resilience you show as you reclaim your history and your traditions.

And it is a story about pride and the determination of people who refuse to let their languages fade away and their cultures die.

I honor that story.

Warren thus sought not just to deflect the historical evidence as to her own conduct, but to reset the media narrative to one in which Warren would not be an exploiter of Native Americans, but their champion.

From a media messaging point of view, Warren received many of the headlines she was hoping for in major publications, such as Politico: 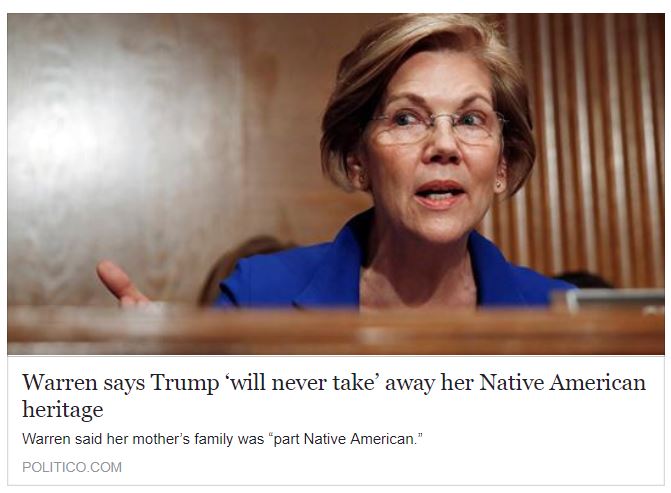 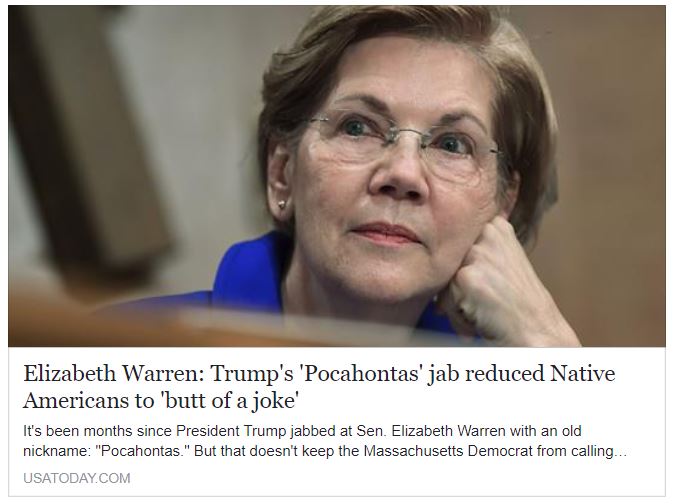 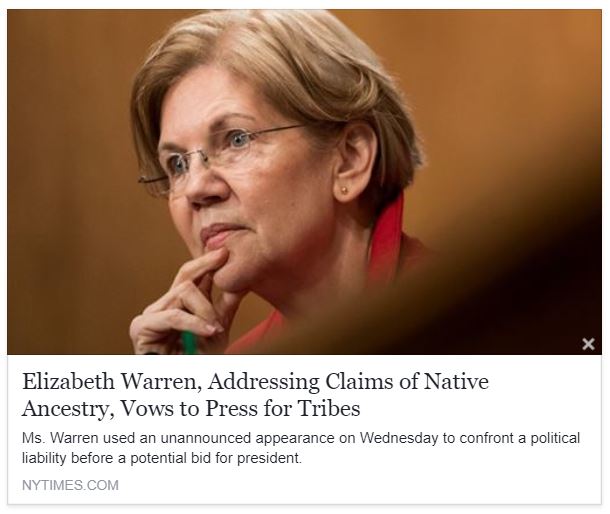 Will it ultimately work?

Thursday night, February 15, 2018, I appeared on Nightside with Dan Rea to talk about Warren’s speech and history.

Will a real Cherokee step forward and scalp this evil creature. What nerve

This is why it was such a blunder for Trump to brand her as “Pocahontas”. The joke is Fauxcahtas, not Pocahontas. “Fauxcahontas” is not something she could “embrace”; “Pocahontas” obviously is. And she’s finally jumped at the opening.

Trump’s handling of the press and the D’rat propagandists has been somewhere between masterful and brilliant since the start of the campaign. But this very obvious tactical misstep was always a puzzle.

Beg to differ. Too early yet to see what else PDT has in store.

By resorting to Fauxcohantas, I think that would be confusing to some that weren’t/aren’t paying attention.

Making her embrace the Pocahontas legend will allow others to demand she deserves that appellation. And she can’t.

Also it’s a bit of cultural appropriation. Again someone could make the claim that she isn’t an Indian so she is appropriating the legend.

I would say to wait and see how much this was a mistake.

I was very surprised no one called her bluff about it and I suggest people on the inside DID know she was coming and set things up for her. And she’s outlined the deal. They now have a bought and paid for Senator other than the ones from their respective states. They OWN her.

Still she has to get in a position to pay that off and that’s 2 years from now.

RE: “Making her embrace the Pocahontas legend will allow others to demand she deserves that appellation. And she can’t.”

Trump has a way of making the “terrorist” anti-Americans politicians detonate themselves…….

I never used my family tree to get a break or get ahead. I never used it to advance my career.

Maybe not her REAL family tree. Just her made-up “My grandfather had high cheekbones” family tree.

Fauxcahontas is the hillary klinton of 2020 – but without the looks, charm and integrity.

This is called a ‘hail mary’ pass.

As the Soup Nazi might say: Fauxcahontas: no touchdown for you!

It may work with the predisposed that have no qualms about her deceptions.

She is too much like Clinton. Hopefully, most will come to see her similarly.

It is impossible to take away what does not exist. She must think herself terribly clever for saying things like this. Lying with the truth, like a true Clinton.

The war (literally) is on. The left knows they have no candidate worth a crap, so instead of trying to win an election, they’re trying to destroy one retroactively.

They’re even digging at the bottom of the brain-trust barrel: LeBron james:

She’s played everyone from “Hunger Games” protagonist Katniss Everdeen, to a jealous wife in “American Hustle,” to a ballerina-turned-Russian spy in her latest film, but Jennifer Lawrence says her next role could be portraying a real-life potential 2020 contender.

When asked which political character she’d want to play, Lawrence told ITK, “I could play Sen. [Elizabeth] Warren as Pocahontas.”