Democrat Sara Jacobs, 28, has the opportunity to become the youngest congresswoman, but she has come under fire due to her “crusty, old Marine” comment she made during an interview. She denies it was toward her opponent, but even then, it doesn’t bode well for her since the 49th district, which she wants to represent, has the West Coast’s largest Marine base.

Jacobs is running for the seat that Rep. Darrell Issa (R-CA) will vacate after his term ends.

She made the comments in a glowing profile Cosmopolitan published about her:

Jacobs seems generally unencumbered by the idea of “how a congressperson should act.” At one point during the community college meet-and-greet at the bar, she needs to get to the other side of the table. Rather than wait for the people on the bench next to her to vacate so she can slide out, she shimmies her body below the reclaimed-wood table, ducking to pass underneath it. She springs up on the other side and smooths out her blazer. At another event, when she’s asked about how she’ll fare with the district’s large military population — especially given that one of her opponents, Doug Applegate, is a retired Marine colonel — her candor makes for an awkward moment. “It’s true,” she says, “I’m not a crusty old Marine.” The group is mostly silent.

Jacobs released a statement apologizing for the comment, saying that she made the comment “to someone who jokingly referred to himself as a ‘Crusty Old Marine’ and then taken out of context.” 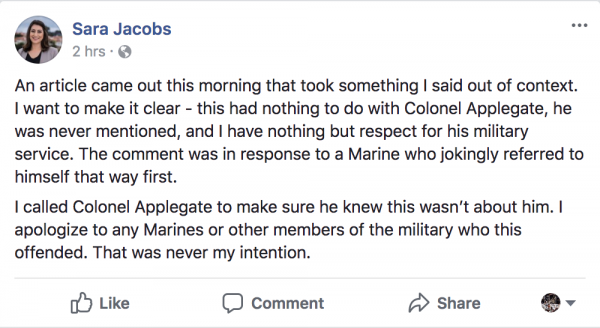 Jacobs now has heat coming from Republicans and Democrats. From The San Diego Union Tribune:

“As somebody who proudly served our country and risked life and limb to defend our nation and our families, I believe that no candidate for public office should attack our service members,” Christina Prejean, an Air Force veteran, said in a statement. “We serve because of our innate passion to protect our country. We should never tear down veterans.”

Prejean left the military as a captain after six years in uniform and now works as a lawyer representing service members and veterans who were sexually assaulted while on duty.

Ashley Hayek, the president and CEO of a firm that raises money for Republicans, also attacked Jacobs for her comment.

Parke Skelton, a consultant for another Democratic candidate, attorney Mike Levin, tweeted that Jacobs’ comment “Seems like a devastating error in this district.”

Paul Kerr, her other opponent in the primary, served in the Navy for 10 years. Republican Assemblyman Rocky Chávez “joined the Marines in 1973 and retired in 2001 as a colonel.”

Chávez has said that the representative of the district must understand “the military and the needs of military families.” The publication wrote that the assemblyman has “tried to assist military families to send their kids to California colleges, or to get young children any special help they need at school if one of their parents is deployed.”

A few military veterans supporters told the Union Tribune that they didn’t find her comments malicious or that she attacked her opponent’s service or anyone else has served.

Young and dumb. Just what we need in DC.

She’ll go far in the Dumb-o-crat Party; she possesses all the prerequisite personality traits — obnoxiousness, ignorance and self-congratulatory sanctimony.

She should first run the proverbial hot dog stand for a few years, before she tries to govern the United States.

If the lesson of obama taught anyone anything, it’s that obamas and trudeaus destroy everything they touch: obama, because is simply evil, and trudeau because he is simply lame.

Clueless millennials who believe their own clueless bs.

These ‘Social Justice Warriors’ want to tell everyone else how to live, while them themselves have just recently moved out of Mom’s basement. Perhaps they figure that political donations are the quickest way to pay off their college debt for a course in racial studies.

This is just the beginning of the flood tide. Wait until congress decides that the voting age should be 16.

I think there should be one unified age of adulthood. One age for drinking, voting, buying a gun, buying cigarettes etc. I’d go for 21 since your average 18 yo hasn’t had to live on his/her own or pay bills or taxes.

If we’re going to keep the 19th Amendment, I’d say 50 should be the minimum for voting. (The other stuff can be younger.) Far too big a chunk of our population doesn’t approach intellectual maturity any earlier.

Age to Maturity is definitely going backwards in our society.

Ironically, I think part of the problem is that the “social justice and self-esteem” crowds have created a side effect of illusory maturity. Young people now think they are mature because they get heaps of undue and vapid encouragement based on a single act or two in their journey towards maturity.

“the problem is that the “social justice and self-esteem” crowds have created a side effect of illusory maturity….”

The left needs young, emotional fools to do their bidding. In other words, they are being WEAPONIZED. Literally.

The radicals being produced in American schools are dangerous to our very existence as a nation, and a threat to our lives.

I think Issa was polling neck n neck with this Jacobs gal a while back. Those polls, plus all the swamp grief Issa has endured all these years, spurred his decision to not seek re-election.

Given that California seems h3ll bent on sprinting down the marxist sh1t hole, I don’t think this ‘crusty’ comment by Jacobs will matter one bit on election day.

I stopped contributing to Issa, and told him so, because he was nothing but a TV hog: Lots of talk with no meaningful action. Much like Gowdy.

The sad part about Issa and Gowdy is that they were on a leash by boehner and ryan, respectively.

The problem was boehner, and the problem now is ryan. And McConnell. And the rest of the GOPe.

If she wanted to be polite, she should have said “salty old Marine.” I don’t know any Marines who would have offended by that — certainly not this one.

Heh, I logged on to pose the question… would any Marine really be insulted by that? Doesn’t salt get crusty when it’s dry?

It’s getting so that conservatives are demonstrating levels of delicacy that rival the best snowflake efforts of the progressive liberals. Christ on a bike, people! Show me a retired old Marine who ISN’T crusty! My retired Marine neighbor would happily and publicly confirm his crustiness.

I don’t know any Marines who’d take offense at being called a “Crusty Old Marine”. But all of them would recognize that she meant it as a condescending insult.

These are the rules the left wanted, not the adults.

I was an Army brat, served in the Air Force, and my eldest is a Marine veteran of Iraq and Afghanistan (currently a contractor in Bagdag). I did not find her comment offensive, and if I were a crusty old Marine in her presence when she said that, I’d think she was hitting on me.

And if you’re wondering why I don’t have any Navy in my family tree, well, I do have standards.

You served in the Air Force but claim to have standards? That’s awesome.

well, he *did* aim high… not his fault the front sight post was up too far. 😎

Agreed. I served as a Marine. Infantry. Where these crusty old Colonels are the reincarnations of Hector, Achilles and Agamemnon. Its quite a thing to behold. And makes you find fault with all other men for not measuring up to that standard.

But it reads like she and the Colonel had some good natured teasing in private and she accidentally let it seep into her public face.

Her apology also sounded quick and very sincere. Take a ride on the Reading Railroad. If you pass go collect $200.

As for the Airforce, Im not going to say anything because I’m not sure what that is.

But she said it wasn’t aimed at him!

Hector and Achilles were champions. Not so Agamemnon, king of Mycenæ, one of the villains of the Iliad. He basically robs Achilles of one of the spoils of war, specifically the captured princess Briseis. Because of this insult Achilles retires to his tent to sulk, leaving the Achæans to suffer a serious defeat … after which everything goes all to hell. According to some theories, Homer modeled the thuggish Agamemnon not so much on the Mycenæns proper as the barbaric Dorian invaders who, in Homer’s day, glowered from their tents pitched atop the ruins of Mycenæ.

As i recall the tight-assed air taxi guys in powder blue were too polished and pretty to ever be referred to as “crusty”.

i would note, in passing, that it’s one thing when veterans refer to ourselves, or other vets in terms that might come across as pejorative or unflattering, as we have earned the right to do so.

it is entirely another when some sillyvillian presumes that they have the right or the gravitas to do the same.

this self important window licker could do with an hour or two of grass drills… you know, until i get tired of watching.

the issue for me is not what she said but being a ‘billionaie’s grandkid’ do we need more entitled people in gov’t to tell the rest of us how to live ?
if she were the one who made the money, i could respect that ability, but not a ‘let them eat cake’ wannabe.

Ah cut her some slack. She’s a woman. Its not fair to judge her by the standards we hold men to.

(runs away while laughing maniacally)

At least she capitalized Marine.

“Easily aggrieved” is the standard the leftists have implemented. It is only fitting that they get to enjoy the fruits of their labor.

Speaking as a crusty old Marine I don’t know about an election, but there is a fair chance she could win a “dog fight”.

Being called a “crusty ol’ Marine”, to my experience, is more akin to a term of endearment or familiar respect.

The young woman may not be well suited for elected office by reason of inexperience, albeit, that never stopped a socialist democrat or Californian from inserting themselves in situations they do not understand.

Col. Applegate could take the high road on this one and brush off crusty ol’ Marine gibberish for what it is. And then thoroughly trounce her into the dust.

Hehe, I wonder if Mad Dog Mattis will show up on Applegate’s behalf and show them what a Crust Ol’ Marine is really like 🙂