Republicans currently hold a slim majority—51/49—in the U. S. Senate and are eager to retain their majority in this year’s midterms.

To that end, they have recruited current Representative Kevin Cramer (ND) to run for the Senate against incumbent Senator Heidi Heitkamp (D). This is a big deal because Cramer is considered the best challenger to Heitkamp in this pro-Trump state, but previously had declined to run.

The decision is sure to come as a relief to Washington Republicans who had been pressuring him to reconsider his decision last month to stay put in the House.

With Democrats fighting hard to seize control of the House this fall, Republicans are determined to hold onto their narrow majority in the Senate, now at 51-49. Heitkamp, a Democrat in a deep-red state that went overwhelmingly for President Trump in 2016, is thought to be one of the most-vulnerable senators this cycle. But until now, Republicans had failed to recruit Cramer to run against her.

Cramer, a staunch Trump ally, acknowledged earlier this week that he was being pushed to reconsider by forces both in Washington and in North Dakota. Trump reportedly was among those applying pressure.

. . . . Party officials are likely to close ranks behind Cramer. A Heitkamp-Cramer matchup in the general election could be one of the fiercest of the 2018 midterms, as they both represent the same constituency; Cramer represents the entire state in the House.

Cramer is already taking on Heitkamp on the tax law and cites its narrow passage in the Senate as one of the deciding factors in his decision to run for Senate.

Cramer, who had announced just a month ago that he was passing on the race, told reporters at the Capitol that he had a change of heart in part because of witnessing important legislation, including the tax cut bill, squeak through the closely divided Senate.

“It’s more the significance of the United States Senate and the fragility of the majority that motivates me to give greater weight to that larger issue than just simply my family,” he said.

With signs that the $1.5 trillion tax cut bill is growing in popularity, Cramer predicted that Heitkamp’s vote against it could prove “fatal” for her, and he said he’d probably be making it a focus of his campaign.

“The vote that mattered, she failed on,” he said.

Democrats are reportedly counting on Heitkamp’s “individual brand” and her work on farm issues to help her win reelection.

North Dakota, along with West Virginia and Montana, is part of a trio of states where Trump won by double-digits, but Democrats have sitting senators with strong individual brands. Heitkamp’s work on farm and energy issues has separated herself from the national party, but GOP internal surveys released publicly consistently show her trailing Republicans by small margins.

North Dakota voted overwhelmingly for President Trump in 2016, with over 60% of the vote going to Trump.  Interestingly, Democrat Hillary Clinton won less than 30% of the vote, while Libertarian Gary Johnson won over 6%.

In this deep red state, Cramer’s House seat is expected to stay in GOP hands.  Among the GOP hopefuls are  former Marine and Iraq war veteran Tiffany Abentroth and State Senator Tom Campbell (R) has dropped out of the U. S. Senate race and is instead running for Cramer’s at-large House seat.

The Cook Political Report was prompted by Cramer’s announcement to move the North Dakota Senate seat from “likely Democrat” to “toss up.”

It appears that Republican At-Large U.S. Rep. Kevin Cramer might have just been playing hard to get when he announced in January that he would not challenge Democratic U.S. Sen. Heidi Heitkamp in November. Today, he has reversed himself, putting the race into the Toss Up column.

. . . . Heitkamp has survived tough races before, but Cramer is expected to be a stronger candidate and run a better campaign than Berg did in 2012. This should become one of the more competitive races of the cycle. It is now in the Toss Up column.

Over all, Democrats face a tough Senate electoral map this year. 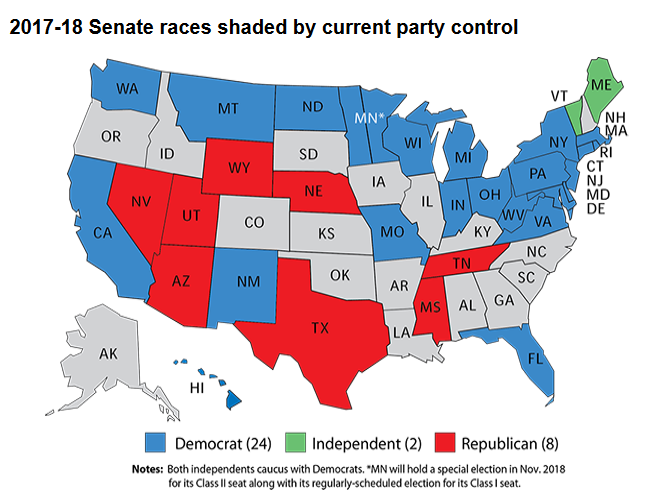 Sabato gives the GOP a “better than 50-50 odds to hold control of the U.S. Senate even in the event of a Democratic wave in November.”

FiveThrityEight reported last month on how bad the 2018 Senate map is for Democrats.

It’s not that I’m pessimistic about the Democrats’ overall position next year. On the contrary, I think most political observers had, until recently, been slow to recognize just how bad things had gotten for Republicans. But the Senate map is really tough for Democrats, with 26 Democratic seats in play next year (including a newly opened seat in Minnesota after Al Franken announced his intention to retire) as compared to just eight Republican ones. Moreover, five of the Democratic-held seats — the ones in West Virginia, North Dakota, Montana, Missouri and Indiana — are in states that President Trump won by 18 percentage points or more.

Just how bad is this map for Democrats? It’s bad enough that it may be the worst Senate map that any party has faced ever, or at least since direct election of senators began in 1913. It’s bad enough that Democrats could conceivably gain 35 or 40 seats in the House … and not pick up the two seats they need in the Senate.

Despite some hope that the GOP can retain the Senate, Senate Majority Leader Mitch McConnell (R-KY) expects to face losses in both the House and Senate.

Senate Majority Leader Mitch McConnell (R-Ky.) says in a new interview that he expects to see Republicans lose seats in the House and Senate this year as the party pushes to retain its majorities in Congress ahead of the 2018 midterm elections.

The top Republican in the Senate told The New York Times for a story published Saturday that “the odds are” his party will face losses in both chambers of Congress this year.

“The odds are that we will lose seats in the House and the Senate,” McConnell said.

“History tells you that, the fired-up nature of the political left tells you that. We go into this cleareyed that this is going to be quite a challenging election,” he added.

McConnell also acknowledged a fundraising deficit faced by some GOP Senate candidates in key states, a figure he attributed to those challenging incumbent Democratic senators.

If the GOP does end up losing some of its Senate seats, it needs to pick up Democrat Senate seats to retain their majority.  Cramer’s decision to run for the Senate in North Dakota may help make that happen.

“Despite some hope that the GOP can retain the Senate, Senate Majority Leader Mitch McConnell (R-KY) expects to face losses in both the House and Senate….”

That’s a loser for you.

(When are we getting rid of this guy?)

I know, right? Imagine a football coach, before the big game, going out and announcing “Oh yeah, we’re gonna lose this game, we ain’t got a chance, that other team is way better than we are.”

How long do you think any sane team would keep him on as coach???

Seeing McConnel replaced as majority leader may convince me that senate republicans are serious about reform.

Cramer most likely held out for a committee chairmanship.

The guy is a full tilt RINO.

““The odds are that we will lose seats in the House and the Senate,” McConnell said.”

What he really means:
We need to lose seats to stop Trump without appearing it is the R party doing the stopping.