The Tamimi Clan continues to exploit and endanger children to the cheers of Western media and anti-Israel activists. 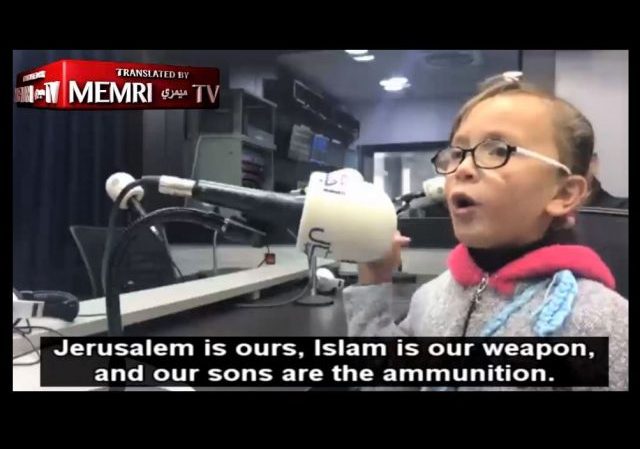 The Tamimi Clan of the village of Nabi Saleh have perfected the exploitation of children and endangerment for propaganda purposes.

The most famous Tamimi child star is Ahed Tamimi, 17, who is in prison awaiting trial for hitting and kicking an Israeli soldier, at her mother’s prompting, during a Facebook live feed broadcast by her mother Nariman. The broadcast also included a statement of support by Ahed for stoning, suicide bombing and other attacks.

Ahed’s current legal predicament was a long time coming, as she had been nurtured at least since she was 7 to confront police and soldiers for the cameras and to cry and scream on cue:

Ahed and other Tamimi children have been exploited for almost a decade. The tactic is to send the children out to confront soldiers, with the cameras rolling. It is a dangerous exploitation of children, but a great propaganda tactic: If the soldiers react, it’s used as proof of Israeli brutality; if the soldiers don’t react, it is used as proof of Israeli weakness in the face of brave Palestinian children.

While Ahed has been the brightest media star of the Tamimi clan (because her blonde hair and light skin appeal to Westerners according to her father Bassem), other Tamimi clan children have been and are being exploited.

Janna Jihad (Tamimi) has been exploited at least since she was 5 years old:

Janna Jihad now is promoted as the “youngest journalist in the world” in a completely contrived media manipulation which has her, among other things, threatening to kill police:

Now there is another rising Tamimi child star, Rouaa al-Tamimi. Now 7 years old, she has been displayed for the radio and cameras for at least a year.

MEMRI documents how Rouaa is being exploited already to call for violence as a “little poet.”

Palestinian girl “poet” Rouaa Al-Tamimi, age 7, appeared on the Ramallah-based Ajyal Radio show on February 7, where she recited a poem about a mother who gives her son a rifle as a reward for finishing his meal. The mother in the poem says: “Jerusalem is ours, Islam is our weapon, and our sons are the ammunition. Therefore, my son, you are a potential martyr.” During her radio interview, Al-Tamimi, who lives in the Nabi Salih village near Ramallah, asked to meet Palestinian Education Minister Sabri Saidam. A few days later, she was invited to his office, where she recited a message to “the accursed Trump”: “Jerusalem is ours. It has been, it remains, and it will always be our capital.” The meeting was posted on the Education Ministry’s YouTube channel on February 11.

[Sorry if the sizing seems off, MEMRI sizes its video embed code so wide that it covers the entire screen so I tried resizing it.]

This child exploitation is welcomed by anti-Israeli groups like Jewish Voice for Peace who portray the Tamimis as heroic for putting their children in harms way.

“Jerusalem is ours, isalm is our weapon our sons are the ammunition – and this thing in my right hand looks like a fake breast.”

I am conditioned by the religion of Peace to regard children as merely camo for terrorists and minarets & red crescents only indicate ammo depots that should be bombed first. Islam makes me see dead terrorists when I see photos captioned ‘Islamic Civilian Casualties’.

Child abuse is a long-standing hobby in hollywood and the left’s paradise of Europe, so why not here?

Is killing children ever acceptable? Like, can you kill a two year old Hitler?