Used as a media prop by Tamimi clan since age 5, now promoted as child “journalist” by al-Jazeera and others 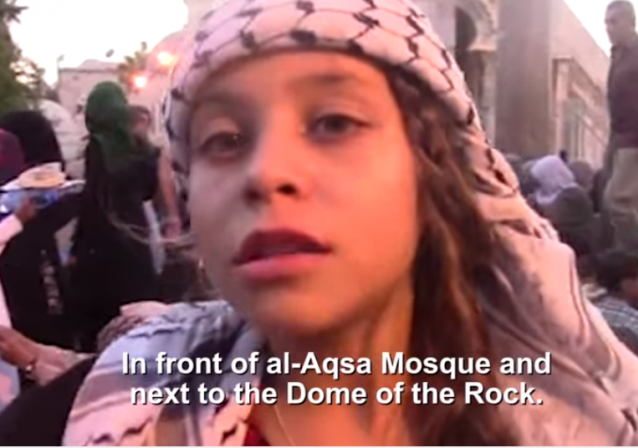 You may recall the name Janna Jihad.

Janna is a member of the Tamimi clan from Nabi Saleh. Among the more infamous Tamimi members is Ahlam Tamimi, the woman who organized the Sbarro Pizza restaurant suicide bombing in 2001, and then broke out with a huge smile when she learned that more children actually were killed than she thought.

The Tamimi clan also has a sophisticated media operation.

Under the guidance of Bassem Tamimi and his wife, Tamimi and other village children are used as media props to confront Israeli soldiers for the cameras, including throwing rocks, hoping to create a viral image or video.

Bassem’s two children are international stars because of images. His daughter Ahed was awarded a medal by the Turkish President for a performance in which she shook her fist as she followed after a soldier, and then with her little brother kicked the legs of the soldiers, who didn’t react.

Tamimi himself caused controversy in the U.S. when he appeared before a third-grade class in Ithaca, NY, in an event arranged Ariel Gold, an Ithaca Jewish Voice for Peace activist (who now works for Code Pink). The school superintendent condemned what amounted to an unapproved anti-Israel propaganda event in which Tamimi beseeched the third-graders to become “freedom fighters for Palestine.”

Part of the third-grade anti-Israel propaganda event was the showing of a video of Janna Jihad being interviewed.

Janna, as we previously detailed, is a rising start in the Palestinian international propaganda campaign. She has been used since at least age 5 to create confrontations for the cameras:

She also has been used to confront police in Jerusalem, threatening that they will be killed, all for the cameras.

Janna also is being groomed to present herself as a “journalist” who, though just 10 years old now, saw her journalistic calling as a means of fighting Israeli oppression. That story line, of course, is a lie, because Janna has been used by the Tamimi clan for much of her life as a prop. Her role of “journalist” is just a convenient media attention ploy — and it’s working. 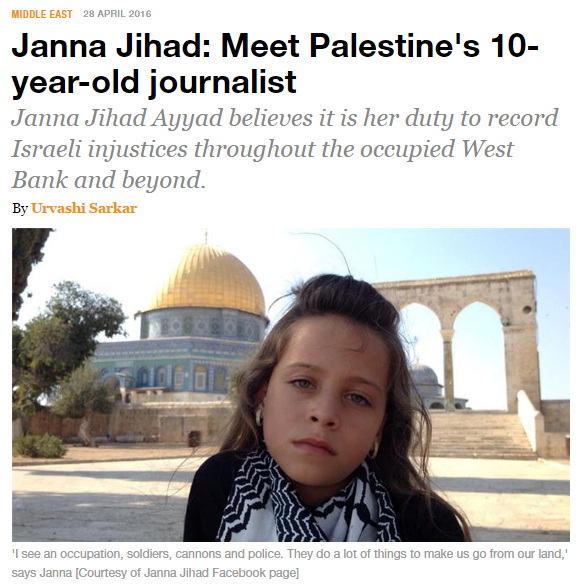 A resident of the village of Nabi Saleh in the occupied West Bank, Janna, along with many other local children, regularly participates in demonstrations against the Israeli occupation. She began making videos of what was happening in her village when she was only seven.

“Not a lot of journalists are sending our message from Palestine to the world, so I thought, ‘why not send my message … and show them what is happening in my village’,” Janna told Al Jazeera.

While there are no journalists in Janna’s family, her uncle, Bilal Tamimi, is a photographer who has documented the violence of Israeli soldiers in Nabi Saleh. Janna was partly inspired by him….

Janna’s uncle, Bilal, says it has been difficult to accept Janna’s work. “She should be playing and studying, but in our life it’s not a choice,” he told Al Jazeera, noting that the family has a history of activism dating back to 1948. “We must teach our children to not accept humiliation and not be cowards. We are under occupation. We cannot teach our children silence; they must fight for their freedom.”

VICE and others also are promoting her:

Of course, this narrative is false. Janna’s journalism is the result of her exploitation by the Tamimi media operation. That is the real story.

I think she will become a suicide murderer giving an interview one day.

all I see in the screenshots is a target.
thats how tired i am off all this crap.

grr typo
I am of all this crap

I’m sure Mohammad would marry her. After he had her whipped for daring to show her hair and face and speak of something other than her household duties.