Ahed Tamimi is the Palestinian teen who has become an international anti-Israel star because since early childhood she has been used by her parents and Western BDS supporters to attack Israeli police and soldier for the cameras.

In the latest incident, which sparked her arrest, Ahed is seen punching and kicking an Israeli soldier, who stands by passively and does not react:

This is not the first time Ahed has kicked and punched soldiers for the cameras as her mother and others filmed, but it’s the first time she was arrested:

Ahed has been thrust into the spotlight by her parents because they understand, as her father Bassem recently stated, that her blond hair and light skin color makes her appealing to Western audiences.

This #FreeAhedTamimi petition states: "Ahed's been on the frontline defending Palestine since she was 7 years old" — which is openly acknowledged child abuse. https://t.co/zyzOhdltg8 https://t.co/xHMDKVk5rD

Yet it the tactic fully embraced by the Tamimi Clan, particularly Ahed’s father Bassem and mother Nariman, and their Western pro-BDS supporters. We covered this fully-documented history in many prior posts, which you can reference for the proof of this child exploitation, including:

Among the many lies told by supporters of this child exploitation is the claim that the Tamimis are merely non-violent activists who want peaceful co-existence, and are only protesting “the occupation”. That false narrative is repeated endlessly in the media, as we showed in Media should stop whitewashing Ahed Tamimi’s terror-supporting family.

There are many other false narratives spread to justify the Tamimi Clan’s child exploitation, such as the claims that (1) the weekly violent protests by at Nabi Saleh are only because the Israelis cut the village off from a natural spring (something another infamous Tamimi, Manal, has denied previously); and (2) Ahed was reacting, in the latest video, only because Ahed’s cousin had been hit with a rubber bullet during a riot shortly before the incident and Ahed was trying only to protect her home (something Bassem actually has denied).

Now Ahed is paying the legal price for this exploitation by her parents and BDS supporters. She has been indicted, along with her mother and another participant in the latest video encounter. Haaretz reports:

Ahed Tamimi, the Palestinian 16-year-old arrested for slapping an Israeli soldier two weeks ago, was indicted on five counts of assaulting security forces and for throwing stones by the Israeli Army’s military prosecutor. Ahed’s mother, Nariman Tamimi, is being charged for incitment on social media, and for assault.

Ahed’s indictment accuses her of a series of similar attacks on IDF soldiers and for throwing stones at security forces. The five counts of assault against her include: threatening a soldier, attacking a soldier under aggrevated circumstances, interfering with a soldier in carrying out his duties, incitment, and throwing objects at individuals or property.

Nariman is accused of being involved in two incidents, including the one videoed, and for incitment on social media sites.

Ahed is charged with aggravated assault in the incident on December 15. The indictment states that two soldiers, a captain and staff sergeant, were standing next to Tamimi’s home, when her mother Nariman used Facebook live to stream the video of the incident. Ahed pushed the soldiers and verbally threatened them, saying: “Get out or I’ll punch you.” She then pushed them, kicked them and hit them in the face, states the indictment. The soldiers remained calm and barely responded to the attacks. She was also charged with interfering with a soldier in carrying out his duties and threatening them.

#AhedTamimi in court today – her custody was extended for a further 8 days so that her attorney can study the charges brought against her @i24NEWS_EN https://t.co/p9dLeFHrRV pic.twitter.com/fY2iGSN6I4

Ahed also was charged with trying to incite others to violence, according to Haaretz, and participating in another violent incident just days earlier:

The indictment states that after the soldiers left the scene, her mother continued to broadcast and asked Ahed to present her message to the world. Ahed then said: “I hope everyone will participate in the protests because that is the only solution to reach a result. Our strength is in our rocks and I hope that the entire world will unite to liberate Palestine because Trump announced a decision and they need to bear responsibility for every response that will come from us – Whether it is a stabbing attack or suicide bombing or throwing rocks, everyone needs to do something and unite in order for our message to reach those who want to liberate Palestine,” the indictment quotes Tamimi as saying….

Ahed is also charged for throwing rocks at soldiers a few days before the videoed incident, during a “public disturbance” near Nabi Saleh, states the indictment. A soldier was returning on the main dirt road in the village and when he was near Tamimi she spit at him and called him a “dog,” states the indictment. She also pushed one of the large garbage bins that made up part of the improvised roadblock out of the way during this incident and threw rocks at soldiers from up close “in order to injure them,” it continues. For these acts she was charged with interfering with a soldier in carrying out his duties, throwing rocks at a person, and assaulting a soldier.

It would not be surprising that Ahed would throw rocks, as we’ve seen such actions by her promoted on social media in the past: 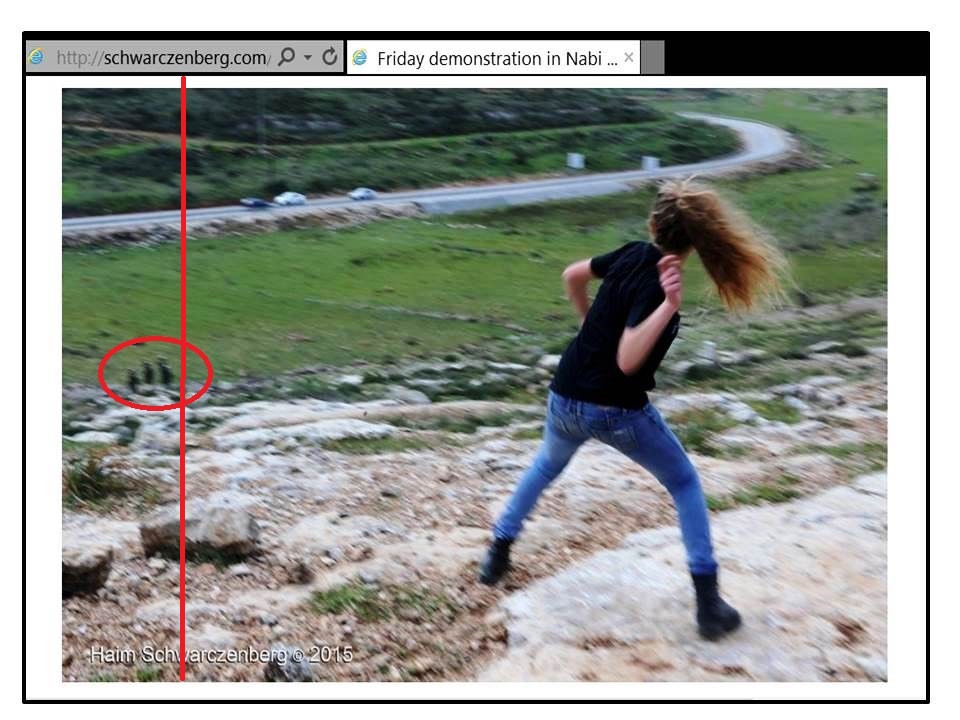 Ahed now is of legal age (update – she will turn 17 this month) and responsible for her actions. Yet she was raised since early childhood to think that rock throwing and attacking soldiers would have no consequences. She will be exploited again the Tamimis’ BDS supporters who will make her a symbol of resistance from the comfort of their homes in the West. They sacrificed Ahed for their own emotional self-aggrandizement, but Ahed not they will pay the legal price.

This story is sure to continue, as Ahed will become the latest organizing tool of the armchair chickenhawks of the BDS movement.

it would be a ‘shame’ if these folks had a car blown up ‘accident’ – doncha think ?

how many deaths has been promulgated by thee ‘get out of jail free’ playahs ?

That, or if one of their mobile phones has a battery explode wink wink nudge nudge.

They HAVE to go after the NGO’s that invite Palestinian hatred of their kids like this! Make these NGO’s responsible for their actions!

Then go after the parents for child abuse! Take the children away from the hatred!

She is just girl.

So was Dr. Ruth and she was a IDF sniper. LOL.

It was a word game.

Indictments were bound to happen sooner or later. Cute little children grow up to be ugly adults, after all.

What Westerners have to understand is that for most of the second and all of the third and fourth world countries, people are simply commodities. They have no intrinsic self worth, only their worth as tools for others. Individual rights and protection are reserved for the few in power. In fact, this is the normal state of affairs in most Muslim dominated countries. Children are not nurtured and protected, they are used, The same is true of women.

You can always have more kids. Besides, making them is fun. And what else do you have to do when the sun goes down?

The idea we’d actually spend money on something called a “pet” is mind boggling.

This isn’t to belittle them or make fun of them in any way. I happen to LIKE Third Worlders. And I have a great deal of respect for them, having hunted with them. The only thing I could do better than them was shoot. And that is just a matter of practice. Otherwise I was totally outclassed.

They should always have been arrested and indicted. Start it up for everyone, not just this pathetic family.

Just for the record, in case anybody is keeping score, I don’t count this crew among actual Third Worlders. I bet they have their iPhones and Toyotas and all.

By Third Worlder I mean someone trying to eke out a living growing corn and snaring birds.

It went entirely to the tribe on whose land I was hunting. Well, except for the tusks an the hide, that went to the government. But the tribe got all the meat. It was my way of giving them their corn back.

You know, there is a universal human language. I didn’t need to speak Shona when trailing that elephant out of the corn field. “Thataway!” I have never seen a crowd happier to see a white guy with a rifle.

Of course, the elephant and his two bestest friends were leaving a trail that didn’t do them any favors. I didn’t even need my Zulu tracker.