There would be no #MeToo movement had Hillary been elected 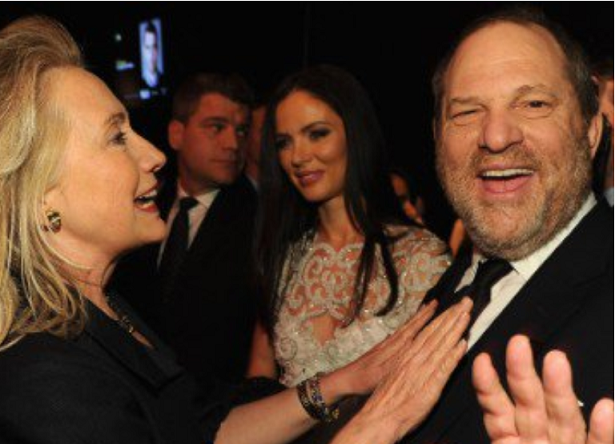 As the #MeToo movement seems to be winding down, the New York Times reveals that back in 2008 a top adviser to then-presidential candidate Hillary Clinton was accused of ongoing sexual harassment of an aide.  Hillary herself, the NYT reports, insisted that he remain with her campaign.

One of the great ironies of twice-failed Democrat presidential candidate Hillary’s 2016 defeat is that had she been elected, the entire #MeToo movement may not have happened at all.  It certainly wouldn’t have gained the traction it did if Hillary and Bill were occupying the White House.

In 2016, we saw a hint of how it would have played out when Hillary clumsily tried to punch back at then-candidate Trump when he returned fire over the Access Hollywood recording and allegations of sexual impropriety by several women.

Given Bill and Hillary’s dark and sordid history with Bill’s sexual exploits and alleged crimes and allegations of Hillary’s intimidation of Bill’s victims, there was no way Trump could lose that battle.  The backlash against Hillary was swift and strong.  So strong, that the phrase “you have the right to be believed” was edited out of Hillary’s campaign website, and she backed off that line of attack against Trump.

Fast forward to Hillary’s deafening silence following the revelations about Harvey Weinstein and her ultimate, somewhat halfhearted condemnation that she was “shocked and appalled” by Weinstein’s behavior.

Deadline Hollywood reported at the time:

I was shocked and appalled by the revelation about Harvey Weinstein. The behavior described by women coming forward cannot be tolerated. Their courage and the support of others is critical in helping to stop this kind of behavior.

This band-aid made no mention as to whether Clinton intends to return any of the campaign dollars doled out to her by the Hollywood mogul, whose career began to unravel on October 5 when the New York Times wrote a major article detailing decades of sexual assault claims and settlements. In last year’s presidential election, Weinstein maxed out on Clinton, giving her as much money as the feds allow, but he also threw fundraisers for her at which he bundled millions more.

Clinton’s silence lasted longer than it took The Weinstein Company board to fire Weinstein from his own company, on October 8.

She may have remained silent hoping that it would blow over, but a part of her calculus had to be the memory of the last time she spoke out against those accused of rape and sexual harassment.

It was also noted by the Boston Globe, that “Hillary Clinton can’t be appalled by Harvey Weinstein without being appalled by her husband.”

Considering that it took over ten years for the media to report on a photo of Obama with Nation of Islam leader Louis Farrakhan, it’s not unreasonable to presume that had she won in 2016 the media would not be reporting on Hillary protecting a top campaign adviser accused of sexual harassment.

A senior adviser to Hillary Clinton’s 2008 presidential campaign who was accused of repeatedly sexually harassing a young subordinate was kept on the campaign at Mrs. Clinton’s request, according to four people familiar with what took place.

Mrs. Clinton’s campaign manager at the time recommended that she fire the adviser, Burns Strider. But Mrs. Clinton did not. Instead, Mr. Strider was docked several weeks of pay and ordered to undergo counseling, and the young woman was moved to a new job.

Mr. Strider, who was Mrs. Clinton’s faith adviser, a co-founder of the American Values Network, and sent the candidate scripture readings every morning for months during the campaign, was hired five years later to lead an independent group that supported Mrs. Clinton’s 2016 candidacy, Correct the Record, which was created by a close Clinton ally, David Brock.

He was fired after several months for workplace issues, including allegations that he harassed a young female aide, according to three people close to Correct the Record’s management.

. . . .  The woman’s experience and the reaction to it have not been previously reported. Until now, former Clinton associates were unwilling to discuss the events for publication.

But that changed in the wake of the #MeToo movement, in which dozens of men across the country and across different industries, have been fired or suspended for sexual misconduct.

Not only is it unlikely the NYT would be reporting this if the Clinton’s were in the White House; indeed, Ronan Farrow, who originally broke the story but couldn’t get it published until October 2017, would still be standing on the wrong side of slammed doors at every media organization of note.

The hypocrisy meme would have been writ large, but it wouldn’t hold a candle to the backlash against her for spending over half a century protecting the male sexual deviants with which she surrounds herself.

If President Hillary Clinton ran the country, and Bill Clinton were the First Gentlemen, would we be experiencing this cultural moment recognizing the problem of sexual harassment, and would the 2017 Person of the Year be those who spoke out about being harassed? Certainly not. More likely, Harvey Weinstein would be sipping Chardonnay in the Rose Garden and eating canapes while ogling his next victim, with Bill Clinton doing the same. President Hillary Clinton would be smugly presiding over a brittle edifice of equality, beneath which lurked decades of enabling, shaming, attacking, suppressing, and silencing.

Consider the lessons that the Clintons taught generations of young people growing up in the 1990s. Allegations against powerful men by powerless women must not be believed.  Let us not forget Paula Jones who claimed that President Clinton harassed her in a hotel room only to try to skirt the civil lawsuit brought by Jones as an acting President, ending up in a settlement for damages years later. These women — voices which are heard and believed today — were then called bimbos, “trailer park trash,” and liars by the Clintons and their flunkies.

Back then it seemed, when powerful men were accused of sexual harassment (or worse), it was the duty of their wives, associates, supporters, and the media to defend the men, excuse the conduct, and attack the accusers. Lying under oath about workplace sexual encounters was justifiable. The dominant coping mechanism was not merely “stand by your man,” but rather scapegoat his victims, blame them, slut-shame them, and destroy them.

By protecting Bill Clinton, and his chief defender Hillary (a self-proclaimed champion of women), for the past 20 years, the Democrats and liberal elite have perpetuated the sexual harassment culture that kept victims silent for fear of repercussions. Consider how Hillary Clinton protected friend, supporter, and donor Harvey Weinstein despite direct warnings about his misconduct toward women, as reported last week by The New York Times.

Hillary has spent her adult life protecting sexually-abusive and perverted men from her husband to her donors to her own campaign advisers. Had she become president, she would have been protected and enabled, as she always has been, by the media.

Not only would Weinstein be slurping wine in the White House, but the entire #MeToo movement would not have happened because the media wouldn’t allow such a thing to sully their chosen president.

Her husband is considered a campaign advisor?

If there is any person who will historically personify a scummy human being, it will be hillary klinton.

notamemberofanyorganizedpolicital in reply to TheFineReport.com. | January 26, 2018 at 4:51 pm

his chief defender Hillary (a self-proclaimed champion of women)

She also claims to have had an “interest” in “children’s rights”. And, when it comes to Billy Jeff and the Lolita Express, I’ll just bet she did.

notamemberofanyorganizedpolicital in reply to tom_swift. | January 26, 2018 at 4:53 pm

Never believe “Self-Proclaimed” people about anything…..

I just want to know who that gorgeous young rose between these two thorns is!

What’s a little sexual harassment when you learned to live with a violent rapist decades ago?

Did Hillary Clinton get Harvey Weinstein’s affirmative consent before putting both hands on his chest? Or did she commit sexual assault?

This is the kind of thing I’d like to know as we’re barreling the bus off the cliff beyond normal human interaction. Which includes spontaneous acts of touching.

I would like to know if what Hillary Clinton did to Harvey Weinstein should be illegal. And if not, why should I as a man have to live in fear that the next woman I meet must be “believed” about an assault charge because I touched her in a way I always though was normal.

The most brilliant mind on cable TV news right now is Tucker Carlson.

1) According to Hillary all women should be believed, except for those harassed at her workplace or by her husband.

2) This is not ordinary hypocrisy, but toxic-level hypocrisy, like if PETA operated a kill shelter.

Peta DID operate a kill shelter! (You think Peta is about protecting animals?? It’s a leftist front.)

“PETA shelter was a ‘slaughterhouse,'”
http://www.foxnews.com/us/2017/03/08/consumer-group-blasts-peta-for-euthanizing-high-rate-animals-at-its-shelter.html

Oy vey, if once again bleeding heart liberals do not practice what they preach, then I suppose that’s just their version of normal.