The bipartisan effort to protect the 4th amendment will continue in the Senate.

The GOP-led House renewed Section 702 of the Foreign Intelligence Surveillance Act (FISA), which allows the government to spy on foreigners abroad by a vote of 256 to 164. Section 702 remains controversial because it can sweep up Americans in the process.

Section 702 does not allow officials to spy on Americans or people in the states, but “the FISA Amendment Act allows the government to collect data from American firms, such as Google or Microsoft.”

At Reason, Scott Shackford wrote that “it also codifies permission for the FBI to access and use data secretly collected by Americans for a host of criminal cases that have nothing to do with protecting America from foreign threats.”

From time to time, lawmakers have tried to push through warrants into the section, but Shackford noted that experts have explained that “the law was worded so that it applies only if you’re a suspect of a crime.”

Yes, you read that correctly. A suspect of a crime “have greater protections under the law than those who just have their data and communications snatched up en masse.”

Myths and Facts about #S139 and #USARIGHTS. Know the truth and protect your rights! pic.twitter.com/cSJQEwDU5s 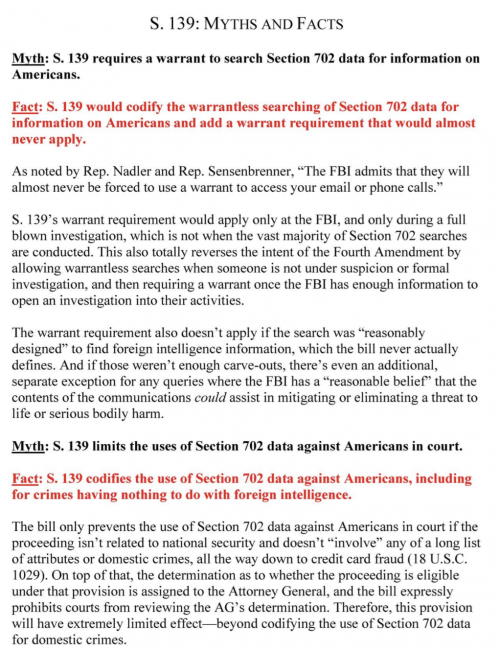 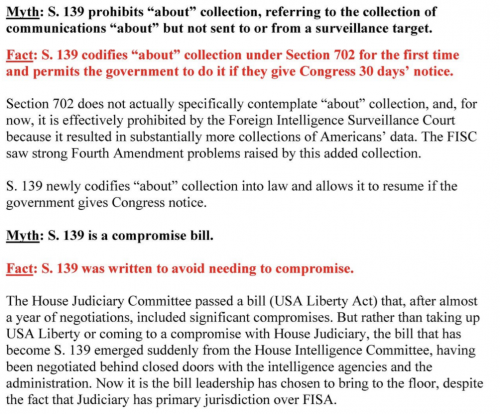 Amash proposed an amendment that received bipartisan support, but it failed 233-183. His amendment, the USA RIGHTS Act, would have replaced the text. Reason explained:

The FISA Amendments Reauthorization Act of 2017—pushed by the intelligence committees of both the House and the Senate—explicitly authorizes the exact violations of citizens’ privacy that Amash and company are trying to stop. Rather than demanding that the FBI and NSA get warrants before they access Americans’ private data and communications, it does the opposite: It gives the feds formal permission to snoop on citizens for a list of federal crimes without getting a warrant first.

Amash has introduced a substitute amendment in the House that would replace the text with the contents of the USA RIGHTS Act. This is an alternative bill sponsored by Sens. Rand Paul (R-Ky.) and Ron Wyden (D-Ore.) in the Senate and by Amash, Ted Poe (R-Texas), and Zoe Lofgren (D-Calif.) in the House.

The USA Rights Act would restrain the feds from using information collected in secret unwarranted FISA searches as evidence in court cases. It would also forbid “about” searches, where feds snoop on communications that are “about” a target as opposed to just communications to and from that target. And it would forbid “reverse targeting,” where the feds snoop on foreign targets for the purpose of accessing the communications of the Americans talking to them.

Here is an image of his proposal from Twitter: 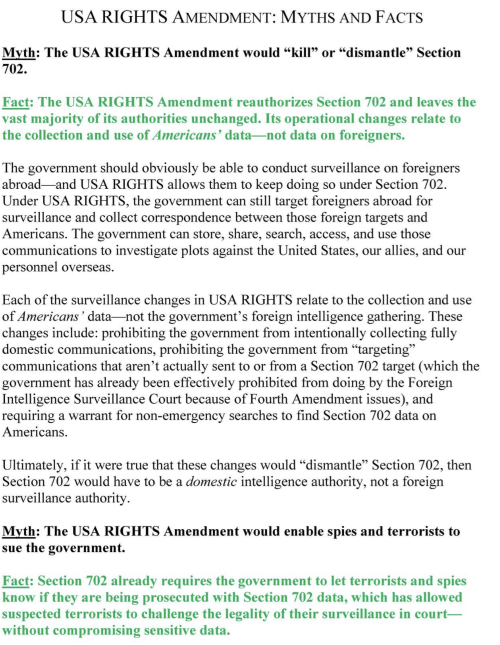 HOWEVER! The Senate may provide us some hope. As I said, Amash’s charge included bipartisan support. Sen. Rand Paul (R-KY) and Sen. Ron Wyden (D-OR) have sponsored an amendment in the Senate similar to Amash’s amendment.

Paul hinted he will filibuster while Wyden flat out declared he will:

No American should have their right to privacy taken away! #FILIBUSTER

If this #Section702 bill comes to the Senate, I will filibuster it.

NSA, US House, US Senate

On this issue, I am a big fan of Senators Paul and Wyden. I with them the best of luck.

Agreed, and this is about the ONLY issue where I have any common ground with Wyden.

RE: “Senator Rand Paul – No American should have their right to privacy taken away!”

Tell that to DiFi – the illegal leaker!

“Diane Feinstein: I’m Sorry I Released Those Transcripts Without Grassley’s Permission; I Was Pressured to Do So. Wait, I Wasn’t Pressured; I Had a Headcold.”

President Trump: “The fact that Sneaky Dianne Feinstein, who has on numerous occasions stated that collusion between Trump/Russia has not been found, would release testimony in such an underhanded and possibly illegal way, totally without authorization, is a disgrace. Must have tough Primary!”

The FISA court is a rubber stamp. It is worse than no protection at all, it is false protection. The Patriot Act was also a mistake, abused 5 minutes after it was passed.

Bullshit. We know of many FISA applications that were denied.

“Many” as in how many tenths of a percent?

The only FISA application I know of that got denied was one to wiretap the Trump campaign, which was promptly edited to leave out any mention of the ‘T-word’ and resubmitted successfully.

Remember the reason we need FISA courts and the Patriot Act:

we let psychos into the country.

End the stream of psychos coming into the country, and we won’t need a police state.

FISA/patriot act is UnConstitutional as it was the day G,Bush signed it as law and it still is.