Glenn Greenwald is in attack mode in support of Chelsea Manning’s run for the Senate in Maryland, with an unintentionally (or not) humorous characterization of the Senate race: 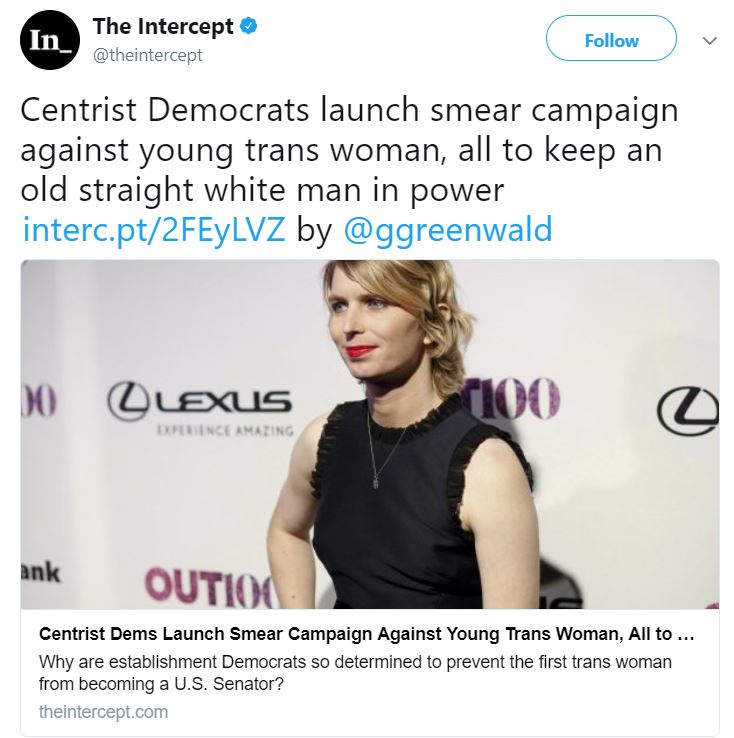 Manning’s opponent in the Democratic Party primary is one of the most standard, banal, typical, privileged and mediocre politicians in the U.S. Congress: Benjamin Cardin, a 74-year-old white, straight man who is seeking his third six-year Senate term. Cardin’s decades-long career as a politician from the start has been steeped in unearned privilege: he first won elective office back in 1966, when his uncle, Maurice Cardin, gave up his seat in order to bequeath it to his nephew Benjamin. With this dynastic privilege as his base, he has spent the last 50 years climbing the political ladder in Maryland….

Despite all of this, or perhaps because of it, establishment Democrats wasted no time in mocking and denouncing Manning’s bid to become the first ever trans woman in the Senate, instead quickly lining up in support behind the straight white male who has wielded power for decades. To demean Manning, many of these establishment Democrats invoked the primary tactic they now reflexively use against anyone they view as a political adversary: they depicted her as a tool of the Kremlin, whose candidacy is really just a disguised plot engineered by Moscow.

So here’s the narrative – support someone who is a convicted national security felon (who never was pardoned, only has a sentence commutation) or you are transphobic and supporting the white male patriarchy.

I hope Chelsea Manning stays in the race for a long time, it’s going to be entertaining to see identity politics used against Democrats by the left-wing of the Democratic Party.

Bradley Manning is not a “woman” of any kind. He is a male, with wholly male chromosomes, who is playing dress-up, calls himself by a female name, and wants the rest of us to go along with his delusions. Which those of us who even vaguely understand biology won’t.

It’s sad that so many people support his mental health problems. He will never get the help he needs with so many co-dependents.

The (effective) traitor, Mr Manning, is a mentally-ill, sexually-deranged and delusional, self-mutilated-by-complicit-surgeon, MALE.

Was born so and will die so.

“It” is the only proper pronoun for someone that is no longer a “he” or “she”!

How does one smear Bradley Manning’s name any more than he has done himself?

I guess that is why he changed it!