Perhaps another act of #CounterResistance to California’s #WarOnTrump? 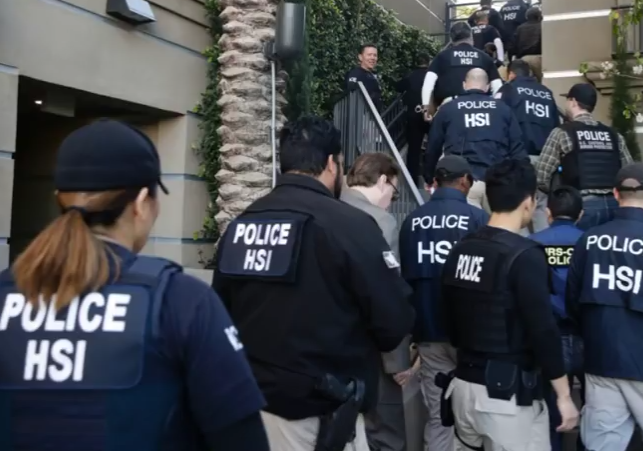 The feds raided locations in Los Angeles, Orange and San Bernardino counties on Tuesday, targeting three competing birth-tourism schemes, officials told NBC News, which was on the scene of one of the raids.

None of the expecting women were arrested, as the raids were targeting the entrepreneurs who were in charge of the maternity establishments.

None of the women were arrested; they are being treated as material witnesses, and paramedics were on hand in case any of them went into labor during the sweep.

Instead, the investigation was aimed at ringleaders who pocketed hundreds of thousands of dollars tax-free to help Chinese nationals obtain visas and then pamper them until they delivered in an American hospital at a discount, court papers show.

Meanwhile, the California senate’s proposal to evade Trumps new tax plan is facing scrutiny. Readers may recall that 2018 rules no longer allow deductions of certain state and local taxes, so the politicos are attempting to enable Californians to direct money to a state fund designated as a “charity” and then take the federal charitable deduction.

Tax experts note that it creates a complex system of calculations the only benefit the wealthy.

“The scramble to restore the uncapped state and local tax deduction in high-tax states is in some ways a curious political exercise, as it largely involves elected officials who have championed progressive taxation contemplating intricate, almost Rube Goldberg-esque ways to make the federal tax code less progressive for wealthy taxpayers in their states,” wrote Jared Walczak, a senior policy analyst at the right-leaning Tax Foundation, in a critique of the legislation.

Beyond practical considerations, Walczak wrote, it’s unlikely the Internal Revenue Service would allow the effort because charitable deductions must have a public purpose under the law, and simply trying to sidestep federal tax liabilities wouldn’t qualify.

Meanwhile, our Lieutenant Governor and leading candidate in the 2018 gubernatorial race is demanding that President Trump resign over his alleged, but not proven, vulgarity.

“You’re a joke and a racist, President Donald J. Trump,” Newsom wrote on Facebook. The former mayor of San Francisco concluded with one word: “Resign.”

I will simply point out that we now have 17 dead Californians in the wake of mudslides, and over 40 who died in December from wildfires. The fact that Newsom is channeling his inner Victorian prude instead of focusing on serious matters, such as infrastructure or emergency planning, makes me worry that our choices for the next governor be limited to those with Trump Derangement Syndrome.

Apropos of nothing is it possible to misgender somebody?

I look forward to the contrived allegations that Trump only ordered raids of places that catered to people from shithole countries and left alone the ones that cater to white people.

And if these woman are not deported then this raid is just another dog and pony show!

None of the women were arrested; they are being treated as material witnesses, and paramedics were on hand in case any of them went into labor during the sweep.

They should wait for “the big day” at Guantanamo. (Not the prison camp, of course: Guantanamo is a Navy base—a big one—and it has things like proper hospitals.) That way they’d have themselves some little Cuban citizens, and it would serve them right.

So conspiring to commit immigration fraud isn’t a crime? Your lawbooks are #FakeNews.

We the People and our Posterity. Everyone else (e.g. mixed citizen and alien parentage) is naturalized according to the rules set by Congress, not the Judiciary, not the Executive.

On the donation-for-tax swap: Making a “donation” in exchange for forgiveness of a tax obligation isn’t a donation. A donation means you don’t get anything in return.

In general, yes. But for some reason the IRS is not applying that to state tax credits granted in return for donations to scholarship funds or land conservancy funds. That gives CA hope that it would treat this “Excellence Fund” the same way. I think that’s false hope.

That’s because they aren’t credits. You still pay the tax (or lessen the refund), you just get to pick where it’s spent.

Targeting the relatively tiny number of Chinese women who come to the States LEGALLY to drop “anchor babies” is a misguided priority. The number of Mexican women who come here ILLEGALLY to drop anchor babies is at least a hundred times higher and since the illegal Mexicans are actually breaking the law they can and should be stopped, if we would just enforce the damned border.

Okay, clean the tax evasion out of the Chinese baby racket, but this business actually LESSENS the overall rotten racism of our tolerance of illegals from across the southern border. Remember the Bushes saying how they were pro-illegal because they have a Mexican branch of the family, “the little brown ones over there”? Explicit pro-Mexican racism in the enforcement/non-enforcement of the laws from the nation’s top law enforcement officer. As bad as rotten Obama.

If a few more Chinese can find a way to get here legally who can have any problem with that? These are obviously functional families. They are the successful Chinese, as opposed to the illegal dregs of Mexico. Come on people, this is one of the few parts of our immigration system that can be calculated to actually help this country.