“I heard rumbling and ran for my life.” 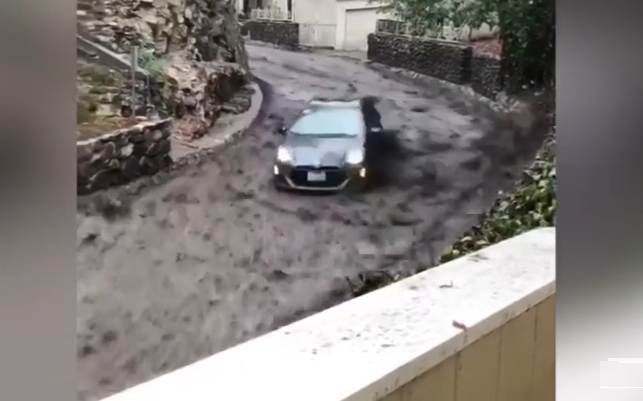 The city of Montecito, close to Santa Barbara, was hardest hit.

And rescue teams were still slogging through the mud, hunting for the missing and assessing the damage.

…Marco Farrell, 45, said he was two blocks away when he saw the slide descending on Olive Mill Road.

A wall of water carrying uprooted trees and boulders flowed like a river through the residential street. About a block up from Farrell’s home, firefighters were helping Devon Crail and his wife, Tiare, retrieve items from his parents’ house.

This BBC video depicts a mudflow that transports a car through the city:

Perhaps one of the most chilling accounts of the disaster comes from Berkeley Johnson and his wife Karen, who escaped onto the roof of their home in Montecito as mud slammed into the building.

But after the flooding had subsided, they heard a baby crying and climbed down from the roof to begin searching.

Mr Johnson told the Santa Barbara Independent newspaper that the pair joined a fireman to dig the toddler out, before scooping mud out of her mouth.

“We got it out, got the mud out of its mouth. I’m hoping it’s okay. They took it right to the hospital.”

“Had we not gone over there, I don’t think that kid would have [survived],” he added.

[I]ntense wildfires transform rich soil into a dense, water-repellent surface. To make matters worse, biologists have found that when rain hits the charred landscape, it can become even more dense and more water repellent.

It’s a long-term effect, too, which means Santa Barbara County will be prone to flooding and mudslides for years to come, potentially.

Another contributing factor is that alerts about potential mudslides did not go out until the flows began.

The message, similar to an Amber Alert for abducted children, was sent about 3:50 a.m. Tuesday to all registered cellphones in areas that were under voluntary and mandatory evacuations because of heavy rains that threatened mudflows in the wake of the Thomas fire, officials said.

It’s unclear how many people actually got the alert. But by then, tons of mud, trees, rocks and other debris were rolling down hills that had been burned in the largest fire on record in California.

For days, officials advised residents in areas burned by the Thomas fire that a coming storm could bring major mudflows. The McManigals’ neighborhood was under a voluntary evacuation order.

Many residents decided to stay. Some assumed the threat was overblown just weeks after the fire triggered similar calls to evacuate.

But when the earth began to move, it was too late. The power of the debris flow destroyed everything in its path and there was no time to flee.

There are plenty of lessons to be learned here, and I sure hope that officials in these disaster zones do more that politically posture about global warming instead of trying to develop infrastructure and response plans that will prevent another 17 deaths next fire season.

Rolling Down The River

FWIW, the video of the Prius being swept down the street was taken in Burbank, which is about two hours north of Montecito. Also, according to KTLA, the couple in the car were eventually able to regain control of their car.

Swept down the street? I thought they were driving for dear life trying to stay ahead of the flood. It reminded me of the scene n Jurassic Park when the jeep was chased by the T. Rex and Jeff Goldblum kept saying “Must go faster! Must go faster!!!” (a line he used again in Independence Day).

Burbank is in LA County, so probably two hours east of Montecito, not north.

“There are plenty of lessons to be learned here, and I sure hope that officials in these disaster zones do more that politically posture about global warming instead of trying to develop infrastructure and response plans that will prevent another 17 deaths next fire season.”

Sorry, but it it too late for that. This was all caused by the criminally stupid policy which hamstrung fire management forestry procedures or stopped them altogether. This was the direct result of politicians knuckling under to the loony, back-to-nature ecology crowd, if they weren’t members of that cult themselves.

For a hundred years, forestry management has been rigorously applied in California, partially because of this particular problem. Until the last few years. Now the residents are reaping the rewards of the lunacy which abounds in the Cereal State. And, this problem will not correct itself for the next 3-5 years. The state could reseed and replant to reduce the potential for mudslides next year. They could use the money that they saved from not providing fire prevention techniques for the last few years to cover it, I suppose.

At the end of last year’s El Nino, the fires were entirely predictable.

Yes, the fires were predictable, and so were the mudslides. It’s California. And despite valid points about forest management in the West, or rather, mismanagement, by the federal government, I think the major reason for these disasters is the cycle Ann in LA describes.

Better building materials and clearing brush near dwellings might help with keeping structures from burning, but nothing stops a flash flood in arid climates.

IB4 Trump’s fault for pulling us out of Paris Accord. You know this attack is coming.

How many more billions of Americans must die because of President Trump?

There were warnings issued. I used to live in Santa Barbara and forgot I was still on the emergency call list. I got a call around 9PM PST Sunday night with a warning to evac if you were in the designated zones, due to coming storm. My sense is that people in the affected areas just didn’t understand what could happen or think that it would happen to them. I lived there 30 years and saw how destructive flash floods can be – believe me, I would have been the first out if it was me.

Are mudslides caused by rain covered by regular homeowners insurance? I suspect that it is part of the flood insurance program. Likewise, rock slides caused by earthquakes would be covered under quake insurance. Any CA residents know about the insurance impact?

A while back, I read an article about using grazing cattle to break up the hardcover on African soils. There were other benefits such as pressing the old leaves into contact with the soil aided decomposition, allowing seeds to go into the soil to sprout and, providing fertilization. Of course, the key is rotating the grazing locations, so the area is not overgrazed.

There are many places which use goats to “mow” riverbanks and there is a program (OK State?) to find goats who like the eastern red cedar which uses a lot of water as well as being very dangerous in fires due to the volatile cedar oil.

It would be interesting to see if increasing some type of activity on the burned slopes would impact the water shedding. Any ag or forestry people available for comment?