Turkey’s bad behavior may be rewarded with German Customs Union

Turkey’s bad behavior may be rewarded with German Customs Union 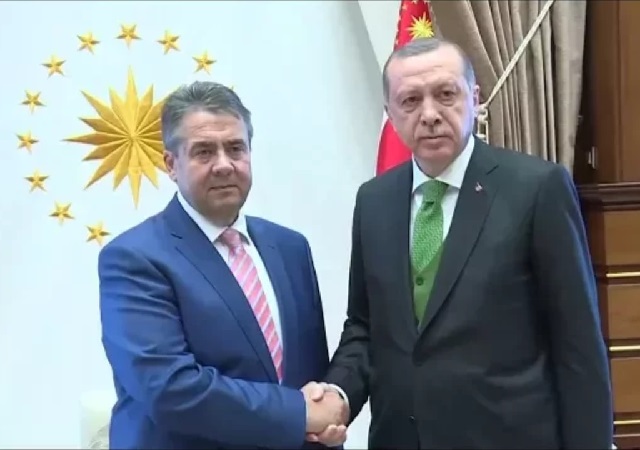 A week after voting against Israel at the United Nations, German Foreign Minister Sigmar Gabriel is proposing an ambitious plan to strengthen relations with the Erdogan regime in Turkey. Gabriel, who also serves as Germany’s Vice Chancellor, wants an EU-wide customs union with Turkey, a move aimed at bringing the Muslim-majority country ‘as close as possible to the bloc’, media reports claim.

The German proposal will treat Turkey, presently run by the Islamist strongman Recep Erdoğan, at par with Britain after it leaves the EU at the end of the ongoing Brexit negotiations.  President Erdogan, who took office in 2003, has assumed authoritarian powers by amending the country’s constitution following a controversial referendum in April this year.  Since then, Erdogan has been busy purging the opponents of his regime from the military, judiciary and civil services.

As UK and the EU come close to finalizing a post-Brexit trade deal, Merkel’s right-hand man wants a preferential trade agreement with Erdogan’s Turkey on those same lines. Gabriel also wants to extend the same offer to Ukraine as well.

[Germany’s] relations with Turkey had been strained long before German citizens were taken into custody. Foreign Minister Sigmar Gabriel still wants to bring the country closer to the EU and he even has a plan for it.

Foreign Minister Sigmar Gabriel suggested greater cooperation between the European Union and Turkey based on the framework of the upcoming Brexit deal [with the UK]. “”If we can reach a smart agreement with Great Britain that outlines its relations with Europe after Brexit, then that could serve as a model for other countries: such as Ukraine and Turkey,” the Social Democratic politician told the newspapers belonging to the Funke Mediengruppe, initial reports on Tuesday suggest.

With regard to Turkey, the minister added that there was desire on the part of Turkey to improve relations with Europe. “It is good sign that several detained Germany have been released,” Gabriel said. [Author’s translation]

While one could make a case for enhancing economic ties with war-torn Ukraine, but rewarding the Erdogan Regime will only serve to embolden its imperialist and totalitarian ambitions.

Erdogan’s rise to power is a classic case of Islamist takeover. Very early in his political career, he told his Islamist followers that ‘democracy was like a train’ he intends to ‘get off once he reaches his destination’.  With Turkish state fully under his control, Erdogan won’t be getting back on that train anytime soon.

The Merkel government, however, feels an urgent need to placate Erdogan in order to get a grip on the migrant influx into southern Europe. Last summer, Chancellor Merkel engineered an EU-Turkey deal on migrants. Under the agreement, EU leaders agreed to offer a down payment of €3 billion to the Erdogan regime in return for its vague promises to “stem migrant flows”.

But going by Erdogan’s own words, he has no intention of stopping mass-migration into Europe. He is on record telling the European diplomats that “we can open the doors to Greece and Bulgaria anytime and we can put the refugees on buses.”

In Erdogan’s Islamist worldview, flooding Europe with immigrants from Arab and Muslim countries is part of his Jihad against the West. As Erdogan himself articulated it: “The mosques are our barracks, the domes our helmets, the minarets our bayonets and the Islamic faithful our soldiers.” For Erdogan, mass migration is a means of Islamist takeover of Christian Europe.

While German Vice Chancellor Gabriel has come out as a campaign of Erdogan’s repressive regime, he has been attacking the only democracy in the Middle East.

In 2012, Gabriel accused Israel of running an “apartheid regime”.  During his visit to the Jewish State in April 2017, he met with organizations involved in anti-Israel activism and boycott campaign. The German politician treated his host, Israeli Prime Minister Netanyahu, with the utmost contempt. As the German newspaper Die Zeit later revealed: “Netanyahu tried to reach Gabriel on the phone (…) but the Foreign Minister refused to talk.” Prime Minister Netanyahu was forced to call off his meeting with the visiting Minister.

Germany’s anti-Israel vote at the UN General Assembly last week was just another expression of German Foreign Minister’s contempt for the only democracy in the Middle East. While sabotaging Germany’s ties with Israel, Gabriel is aiming to bring Erdogan’s Turkey ‘as close as possible’ the EU. And unfortunately, that’s the current German Foreign Policy in a nutshell.

Once you decide on a policy of bowing and scraping, it never ends.

Turkey has weaponised the migrant crisis for its own financial benefit BUT it’s done that because the EU has allowed them to.

Germany is awash with Turks who don’t want to become Germans. This would further the trend. But Germany is in error in making a pact with the Turkish devil, which is the current Islamist regime. Pre-Erdogan Turkey was one thing; the neo-Ottoman regime is another.