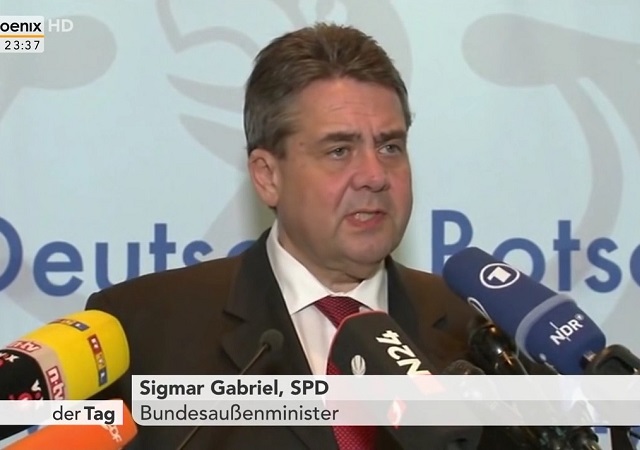 Prime Minister Benjamin Netanyahu called off talks with the visiting German Foreign Minister Sigmar Gabriel over his insistence on meeting anti-Israel NGOs. Netanyahu had previously urged Gabriel not to meet with organizations that are involved in anti-Israel activism. According to German newspaper Die Zeit, “Netanyahu tried to reach Gabriel on the phone on Tuesday, but the Foreign Minister refused to talk.”

Disregarding his host’s request, Gabriel went ahead with his plans to meet the representatives from Breaking the Silence and B’Tselem, two groups fueling anti-Israel activism and the boycott campaign. Gabriel, who also holds the position of Germany’s Vice Chancellor, serves as the chairman of Germany’s Social Democratic Party (SPD) — Chancellor Angela Merkel’s junior coalition partner.

Netanyahu’s decision irked many German politicians. Social Democratic MP Reinhold Robbe was shocked by PM Netanyahu’s perceived audacity, calling it “an unprecedented temerity on part of the Israeli head of government.” Former Green Party leader Jürgen Trittin hysterically asked on Twitter, “Is [PM Netanyahu] on his way to becoming an autocrat?” Chancellor Merkel’s senior foreign policy advisor Norbert Röttgen (Christian-Democrat) told the reporters in Berlin, “It is a mistake on the Israel’s part, it is very very regrettable.”

Germany’s top diplomat Sigmar Gabriel said on Tuesday that Israeli Prime Minister Benjamin Netanyahu had called off their planned meeting at the last minute. The announcement was then confirmed by a Netanyahu spokesman.

The move came a day after Netanyahu issued Gabriel with a clear ultimatum: If the foreign minister met with human rights groups Breaking the Silence and B’Tselem, he would call off their talks. Gabriel had said earlier that such a cancellation would be “regrettable,” but that he would not bend to the demands.

In 2012, Gabriel—then leader of the SPD party—referred to the Israeli presence in Hebron as an “apartheid regime.” https://t.co/1WlovfuTv9

According to the watchdog group NGO-Monitor, between 2012 and 2015 at least €4 million of German taxpayer money was allocated to Israeli NGOs, and more than 40 percent of the money went to groups promote the anti-Israel boycott (BDS) and activism aimed at delegitimising the state of Israel. German political parties directly fund and support activist networks through their taxpayer-funded foundations.

He is just the spiritual heir of Adolf Hitler.

“Netanyahu called off talks with the visiting German Foreign Minister Sigmar Gabriel over his insistence on meeting anti-Israel NGOs.”

German officials just can’t understand why Bibi and Israel would be upset that mini-Wannsee conferences are being conducted right there in their homeland !!!

Translated to English: Those who do not remember the past are condemned to repeat it.

This is going to be an unpopular position, but Netanyahu needs to tread carefully here.

…The latest and one of the most expensive weapons in the IDF’s arsenal, the Dolphin-class submarine INS Rahav, set out for Haifa from the German port of Kiel on Thursday, according to a senior naval official.

Ordered a decade ago, the Rahav will be Israel’s fifth Dolphin-class submarine, joining the INS Tanin, Tekuma, Leviathan and Dolphin at the Haifa naval base when it arrives next month…”

I don’t believe that Netanyahu, knowing that Germany is the IDF’s foreign shipbuilder of choice (Northrup Grumman and Lockheed Martin jacked up their prices), would gratuitously PO the country. But still, the civilities must be maintained.

And, yes, I know Israel builds some of its own ships.

Germany is so screwed.

Germany may be screwed but Germany builds some d#mn good boats. The Isreali Dolphin class sub is a variation of the German 209 class, and the Sa’ar missile boats are based on modifications of the German MEKO class frigate.

“Early sources from Germany indicated that the future Israeli Navy patrol vessels are based on the MEKO 80 designed and built by German group ThyssenKrupp Marine Systems (TKMS). MEKO 80 patrol corvette is a slightly reduced version of the MEKO 100 (of which 6 were built for the Royal Malaysian Navy and one under construction in Poland for the Polish Navy).

It appears clear now from the images that Saar 6 vessels will not just be “Patrol Vessels” as initially reported but rather powerful Corvettes with a displacement of about 2,000 tons and a length of about 90 meters…”

That makes them larger than the Sa’ar 72 (72 meters) and clearly much more capable.

Still you are no doubt right. Israel needs to upgrade its Kishon shipyard, and build more, so Israel can build all the warships it needs.

Piss on Germany. They have their hands full with all the filthy muslim heathens they have imported.

Those who forget the lessons of history are going to repeat the same mistakes.

For a generation after WW2 Germany walked on eggs when it came to the Jews. Now? Evidently the antisemitism in their DNA is rising to the top again.

Infesting that DNA with Muslims will only exacerbate the problem. And given the number of German woman who have been and will be raped by the Muslim barbarians they welcomes within their gates, that DNA infusion has probably all ready started.