UPDATE: He is resigning immediately after his wife was admitted to a hospital on Friday. 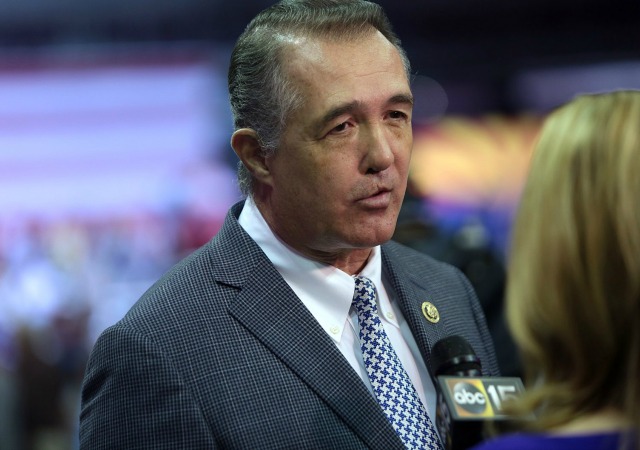 *UPDATE 3:25PM* AP just tweeted that Franks is retiring immediately after wife is admitted to the hospital. Frank Thorp tweeted Franks’ statement, which said she is in the hospital for an ongoing ailment and after discussions with family, he decided to retire today.

Rep. Trent Franks (R-AZ) has decided to resign amid reports that he asked female staff members to bear his child. The House Ethics Committee had said it would investigate the lawmaker.

Franks said in a statement that he brought up surrogacy with two former female staffers because he and his wife have struggled with infertility. The topic made the females feel uncomfortable.

Speaker of the House Paul Ryan (R-WI) became aware of the claims and confronted Franks, who did not deny the claims. Ryan informed Franks that he would send the claims to the Ethics Committee and told him to resign.

Here’s the statement on @RepTrentFranks from @SpeakerRyan. Regardless of Franks’ “surrogacy” explanation, Ryan seems to have seen this as a congressman repeatedly & inappropriately propositioning staffers to bear his children to the point of discomfort and intimidation. pic.twitter.com/Am8YzyNyGi

Franks mentioned in his statement that he did not intimidate anyone or tried to have sexual contact with them. From The New York Times:

“Due to my familiarity and experience with the process of surrogacy, I clearly became insensitive as to how the discussion of such an intensely personal topic might affect others,” Mr. Franks said.

Mr. Franks denied that he had ever “physically intimidated, coerced, or had, or attempted to have, any sexual contact with any member of my congressional staff.”

His statement said only that he deeply regretted discussing the topic of surrogacy, but a Republican familiar with the accusation said that Mr. Frank had specifically asked those aides to be surrogates.

Franks has been in Congress since 2003 and known as a fierce conservative. He is a member of the House Freedom Caucus. The Arizona “state law requires a special election to fill his seat for the remainder of the term.” Unlike the Senate, a vacant seat in the House has to be filled by an election.

The Ethics Committee also announced it would start an investigation into Rep. Blake Farenthold (R-TX) after it was revealed that in 2014, he paid $84,000 to settle a claim with his former employee Lauren Greene. She accused him of gender discrimination, sexual harassment, and creating a hostile work environment. The Washington Post reported that the committee opened an investigation into Farenthold in 2015, but could not pull in a cooperating witness other than the lawmaker.

Oh, for Pete’s sake! What a grossly misleading headline! The poor man and his wife suffered from years of infertility and he was discussing SURROGACY. While I agree that it wasn’t exactly appropriate in an employment situation, it was absolutely not sexual. I certainly don’t condone sexual harassment or, God forbid, sexual assault. But this ridiculous rush to insinuate that every man is a sexual predator has got to stop. Please look up “false equivalency.” Sheesh.

Yeah, this is more than a stretch. The poor man and his wife looking for a surrogate… Awkward yes but happens all the time. I do not see why Franks should step back unless he is just tired of the Swamp and all its creatures.

Drain the Swamp and circle the wagons around the few decent people that might still be there.

I feel badly for him. It is possible that he recognizes that, right or wrong, he’s now been targeted in this witch hunt and is doing what he can to shield his family from the chaos. The women he approached about surrogacy may have felt uncomfortable at the time, but, in my opinion, Rep. Franks is the victim here.

If what Franks says is true (it was just asking about surrogacy) then the real story is about Paul Ryan driving a member of the Freedom Caucus out of congress.

Politico says the staffers thought sex may have been involved…but the way the story is written seems fishy.

AP says Franks asked multiple times and offered $5 million, but there are a lot of women out there who would be surrogates for $5 million. I am not sure that sort of compensation is even legal. Why so much (and why does a congressman have that sort of money to spend on surrogacy, is Franks independently wealthy)?

For $5 million, I’d carry the baby

Vodka Pundit is skeptical of Politico headline vs. the story. But I agree with him, I am not drunk enough for today’s news cycle.

This sexual head hunt will not end well

WTF! Why bother with the ethics panel if you have already passed judgement?

Arizona should vote him back in as a protest to the leadership.

Oh, good. I’m not the only one who thinks this is crazy stupid. I was starting to wonder if there was something a bit off with my meds.

I know some women can be awfully snowflakesque, but it takes a really special weirdo to flip out about mere surrogacy. Jeeeez, just say “no”, already. Unless they did, and he wouldn’t drop it at that. But that’s not the story we’re being fed here.

I’m not sure I understand why this is a problem. If there was no pressure coercion or implied threat involved, what’s wrong with asking for help? This is not like the car dealer on Long Island who got a lkidney transplant courtesy of a low-level employee and then fire the employee because she was weakened from donating a kidney to save the millionaire owner’s life. ( that actually happened)
Unless straight people having kids is now a punishable offense….Maybe that’s considered too freaky up on Capitol Hill.

Is Franks being tossed to the wolves by Ryan to prove “the GOP can deal harshly with it’s sexual harassers TOO”??

Sort of. The GOP Congressional leadership plan appears to be painting all sexual harassment and alleged sexual abuse with the same brush, worthy of the same penalty: removal from office. It’s not hard to figure out why when we remember that Ryan and McConnell were adamantly anti-Trump before they were luke-warmly anti-Trump.

They won’t move against him because they fear Republican Trump voters; the plan, it seems, is to set the stage for a massive public outcry that the president be held to the same standard. An outcry they will claim they can’t ignore, no matter how it grieves them, blah blah blah. That outcry won’t happen among the GOP base, but they hope that moves like this will foster it.