This is Germany: “Safe zones” for women during New Year’s Eve celebrations after past mass sexual attacks

This is Germany: “Safe zones” for women during New Year’s Eve celebrations after past mass sexual attacks

Germany appears unwilling or unable to control its streets from migrant gangs, so “safe zones” are the cop-out. 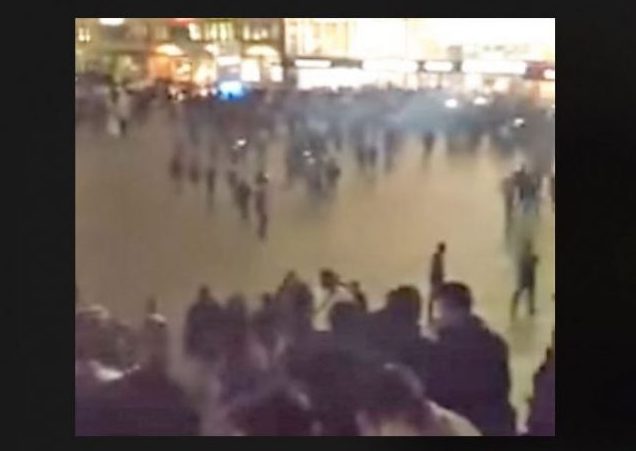 In both 2016 and 2017, there were mass sexual assaults on women in German cities during New Year’s Eve celebrations.

The police initially tried to conceal that most of the perpetrators were either migrants or Middle Eastern immigrants. But the truth eventually came out and it was a major scandal.

We covered the assaults in numerous posts, including this initial post on January 5, 2016, Mass sexual assaults on New Year’s Eve in Cologne add fuel to migration hostility:

This story is the sum of the worst fears about the migrant crisis, and is sure to reverberate widely as more European countries seek to impose border controls.

Police in the western German city of Cologne responded on Monday to outrage over a string of sexual crimes over New Year’s Eve. According to police, the series of assaults in one of the city’s busiest thoroughfares represented a “completely new dimension of crime.” ….

We continued to follow the story as more details emerged and the fury grew, Cologne Sexual Assaults – The Toll rises:

When the full details emerged months later, it became clear that it was Worse than we thought: 1200 German women sexually assaulted on New Year’s Eve:

A leaked police document shows that 2,000 men assaulted over 1,200 women across Germany on New Year’s Eve.

The police have only caught 120 suspects. Foreigners make up the majority of suspects, which shows that the increase of refugees and migrants is linked to the rising sexual assault and rape cases across the European Union….

The Federal Criminal Police Agency (BKA) document states the assaults took place in Cologne, Hamburg, Düsseldorf, Stuttgart, and other towns. BKA President Holger Münch admitted that the majority “of these crimes will not be followed up on.” From Süddeutsche Zeitung:

Some of these crimes several women have been affected. So the BKA is a number of a total of about 1200 victims of sexual assault: about 650 in Cologne, more than 400 in Hamburg and other in Stuttgart , Dusseldorf and other places.

The suspects “have been in Germany less than one year.” Münch said “there is a connection between the occurrence of the phenomenon and the strong levels of immigration in 2015.”

What should comes as a warning to America, Germany is losing control of its streets thanks to Chancellor Angela Merkel’s policy of uncontrolled migration. Details have emerged of coordinated sexual assaults in Berlin, bringing back the memories of last year’s mass sexual assaults in the city of Cologne.

Large police presence was needed on this New Year’s Eve to contain the gangs of migrant men in cities across Germany — especially in Cologne, Frankfurt, Hanover and Karlsruhe.

This year, German authorities, apparently believing they are unable to control the situation, have taken to creating “safe zones” for women, as the BBC reports, New Year’s Eve party in Berlin to have ‘safe zone’ for women:

The new security measures planned for the Brandenburg Gate party come amid concerns about sexual assaults.

Hundreds of women reported being attacked by gangs of men with migrant backgrounds.

The events in Cologne heightened tensions in the country over the large influx of refugees and migrants – 1.1m people arrived in Germany in 2015, some, but by no means all, fleeing violence in Syria and Iraq.

Hundreds of thousands of people are expected to attend the New Year’s Eve party in Berlin on Sunday and security will be strict. Large bags, such as rucksacks, and alcoholic drinks will be banned at the Brandenburg Gate.

Women who have been assaulted or feel harassed will be able to get support at a special “safety zone”, staffed by the German Red Cross, on Ebertstrasse.

Berlin police confirmed that this year women would be able to seek help in an area staffed by the German Red Cross.

“The organisers have set up a safety zone for women who have been victims of a sexual offence or are feeling harassed,” a police statement said.

Anja Marx, a spokeswoman for the event, said there would be a tented area with psychologists on hand.

Safe zones are not the answer. Getting control of your streets is the answer. But Germany appears unwilling or unable to do that.

Wait, so the “safety zones” aren’t even to protect the women from getting assaulted? They’re just somewhere to go to get “support” after they’ve been assaulted?
At some point the German people just need to say enough and take matters into their own hands. Because their government has completely failed.

I guess they’ll have handy-wipes and The Morning After pill available.

It’s like a sick joke. I wonder if all of this is making any progs re-think their opposition to the right of self-defense?

Sorry. Inadvertently down thumbed while scrolling

Far too many among the German police have learned a certain protocol from Sgt Schultz,

This was what stood out to me, as well. This isn’t about Play-doh and blowing soap bubbles in a safe space where those dreaded evils who walk around with wrong thoughts cannot touch our Skittles-pooping unicorn land. This is a “safe space” to which one would crawl, bloody and battered, after being raped by one or more “refugees” slash “immigrants.

Germany will not protect her citizens, but hey, how about popping by the post-rape tent for a nice chat with a friendly shrink?

This is appalling and unconscionable.

Why would women be safe in these zones. Germany doesn’t even protect its policewomen. I suspect the rapists could drag a screaming victim straight out of the safe zone and nothing would happen to the rapists.

Thousands of victims last year including policewoman and a tiny handful of arrests. Germany won’t be safe until the, ‘refugees’ go back.

What, are they going to put up nice signs saying Schutzzone? Yeah, that’ll work a treat.

Berlin and San Francisco; both are sanctuary cities. But not for their residents or citizens, just for the invaders.

The German people themselves are capable of handling this: people need to go to these parties in groups, and all of the ladies need escorts.

We know that the ladies are not “giving offense” by their clothing: it’s cold on New Year’s in Germany.

Germans just need to pretend muslims are Jews or Roma. Their natural instincts will take over and the problem will be solved.

You appear to have misspelled “Bernhard Goetz”.

Yet progressive countries like Germany and Sweden, the rape capital of the western world, want more migrants because it’s the politically correct thing to do.

Based on their deliberate actions, this is what the German people want. They refuse to do anything to protect their own people. So be it. You cannot protect those who do not want to be protected, and they have kind of used up any sympathy they might otherwise have gotten. Let them have what they want, what they have voted for repeatedly; good, hard, and repeatedly. Ohne wassermischbarer Schmierstoff

If the Germans try to get tough on this problem they’ll be labeled nazis and fascist. The muslims will make sure.