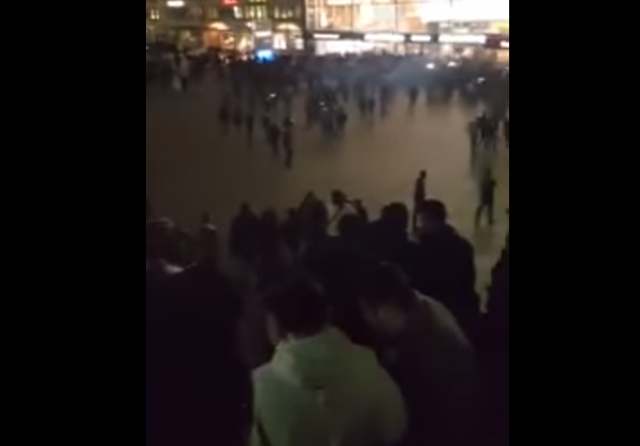 A leaked police document shows that 2,000 men assaulted over 1,200 women across Germany on New Year’s Eve.

The police have only caught 120 suspects. Foreigners make up the majority of suspects, which shows that the increase of refugees and migrants is linked to the rising sexual assault and rape cases across the European Union.

Germany added stricter rape laws due to the influx.

On Thursday, a court in Cologne sentenced two men in the New Year’s Eve assaults. Hussein A., a 21-year-old Iraqi, and Hassan T., a 26-year-old Algerian, were handed suspended one-year sentences. Both arrived in Germany in the past two years, a court spokesman said. He declined to specify whether the two had sought asylum.

The Federal Criminal Police Agency (BKA) document states the assaults took place in Cologne, Hamburg, Düsseldorf, Stuttgart, and other towns. BKA President Holger Münch admitted that the majority “of these crimes will not be followed up on.” From Süddeutsche Zeitung:

Some of these crimes several women have been affected. So the BKA is a number of a total of about 1200 victims of sexual assault: about 650 in Cologne, more than 400 in Hamburg and other in Stuttgart , Dusseldorf and other places.

The suspects “have been in Germany less than one year.” Münch said “there is a connection between the occurrence of the phenomenon and the strong levels of immigration in 2015.”

The BKA plans to publish the full findings this week.

The assaults caused Germany to add the “No means no law.” Before that, a woman had to fight back against her attacker in order to claim he raped her:

Under the previous law, defined in Section 177 of the criminal code (in German), victims should have defended themselves for an act to constitute rape. Simply saying “No” was not sufficient to find the defendant guilty, and there was no attempt to define what constituted consent.

The inadequacy of the law meant many perpetrators got away with rape, according to a 2014 study of 107 cases by the German association of women’s counselling centres and rape crisis centres (BFF).

The authors said that in every case, sexual assaults had been committed against the victim’s unambiguous will, which had been communicated verbally to the perpetrator. However, they said, either charges were not filed or there was no court conviction.

The study went on to note that the law placed too much focus on whether the victim resisted and did not reflect real-life scenarios in which people were raped.

The new “No Means No” law will also allow the country to easily deport any foreigner convicted of sex crimes. People involved in a group of others committing sexual violence may also face charges even if they did not participate.

In March, a study showed that sexual assault in Germany has risen since the government accepted over 1.1 million refugees. The Gatestone Institute chronicled the reported assaults and rapes in 2016. At least one occurred every single day.

In April, outlets reported that a politician tried to pressure police into removing the word rape in their reports from New Years Eve:

Local officers had produced an internal “important event” memo entitled “rape, sexual harassment, thefts, committed by a large group of foreign people” – the first indication of the scale of the incident which would go on to make headlines around the world.

According to Cologne newspaper Express, officers received a phone call from the state police control centre ordering them to take down the report “or otherwise delete the phrase ‘Vergewaltigung’” – “rape”.

A senior Cologne police officer told Express he was informed of the order by a colleague who took the call, and that state police understood it to be “the wish of the state interior ministry”.

Henriette Reker, mayor of Cologne, caused more controversy when she said women need a “code of conduct” to prevent men from sexually assaulting them.

Mayor of Cologne, Henriette Reker, says women should have code of conduct to prevent future assaulthttps://t.co/gjADHToy3X

The best “code of conduct” for women would be to arm themselves. Maybe Germany will consider changing their firearm laws as well as their rape laws.

Risk management 101. Increase the opportunity cost to abortionists and rape-rapists, and perhaps rapists, too.

(No sarc tag should be needed.)

1 year suspended sentence? So if you rape a German woman the punishment is mild annoyance and a court appointed attorney?

40 – 50 years ago the thought never entered my mind I’d live in a world where this would be happening in either Europe or America. It’s coming here given the sorry state of a growing number of men.

What are you traditional women going to do when your Progressive, secular sisters council non resistance, don’t do anything to excite or provoke men of other cultures? A total non answer?

What are you going to teach your daughters & granddaughters?

Will the future metrosexual man go more & more homosexual to avoid the issue?

Center of mass sounds like a good idea to me.

Old :
If Hillarys elected, she’ll nominate Holder & Obama types to the supreme court. They’ll essentially neuter the 2nd amendment. Under progressive, secular thinking those women may well be prosecuted. Guns are a bigger threat to the state than rape.

The worthlesspublicans may well lose the senate. Even if they somehow hold it that won’t matter.

Not to fear though, once the #never Trump crowd eliminates him as a threat to their authority, they’ll step up & fill the void. They always do.

So. No action whatever, once again.

Twelve hundred assaults on women. Two convictions; hardly a response, let alone an adequate one. And to be sure nobody misses the message—that no effective response will be made under any circumstances—both sentences are suspended. Then they pretend that the problem is that they have to fiddle with the text of the law.

They’re not even pretending, are they?

outlets reported that a politician tried to pressure police

No names, I see. So the press is covering for the enablers of this crime wave.

Well, the press is at least pretending, so they’re not quite so decayed as officialdom. Yet.

If you want a German car, get one now. There won’t be any in ten years. Muslim countries manufacture nothing.

(Not quite true. American, Japanese, and Korean companies do successfully manufacture some small consumer items in factories in Indonesia. But the Indonesian Muslims are not really very much like the Muslims who are currently overrunning Europe.)

“Muslim countries manufacture nothing. ”
That’s not true. They miniatruized the kamikaze bomber. The airplane is now optional.

I saw WZ posted one of these assaults happening in a public pool in Mass.

“Stricter” rape laws like, maybe, Sharia compliment such that more “witnesses” are needed? That would cut down on cases of rape. Already these countries are segregating sexes to avoid problems and that segregation is really implementing part of Sharia law.

The liberals have created and saved a rape culture. Progress.

Conceal carry is another way of saying “No means no.”

This, Ladies and Gentlemen, is what a “Culture of Rape” looks like. Compare to the typical Ivy League Campus.

With all the sex you want for the taking, Germany must be a blast – a literal paradise on earth.

This is a lighter version of the Soviet occupation of Berlin at the end of the war, where invading Soviets made every German woman a sex slave.

That is the America the Left wants so badly…