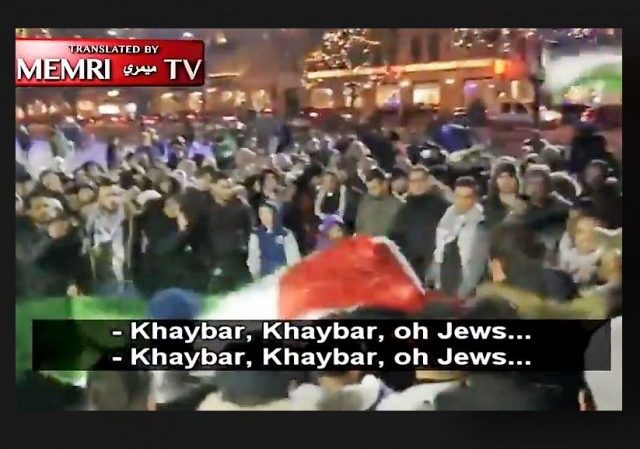 The cover story has been, and still is, anti-Zionism and Israel hatred. It’s what, in February 2010, I called Malmö Syndrome:

Malmö is the third largest Swedish city, and now the poster child for what I call Malmö Syndrome, the anti-Semitic violence which results from the shared anti-Israeli agenda of Islamists and leftists.

The result is that Malmö is being depopulated of Jews as a result of street violence by Mulsims and disinterest by left-wing politicians ….

At the heart of Malmo Syndrome is the attempt to delegitimize Israel ….

Critics of Israel who are not anti-Semitic need to admit that they have a problem, Malmö Syndrome.

The line between anti-Israel rhetoric and anti-Semitic violence has been all but erased, and the enlightened leftists supposedly committed to human rights in fact are in bed with those who act on the oldest hate.

In my July 15, 2014 post, Islamist Jew-haters and their leftist enablers: “The Jews are Beasts”, I summarized the situation, which is anti-Semitic violence and intimidation by young Muslim men accepted by leftist politicians because it uses the cover of anti-Israelism. Sweden has been a particularly glaring example of this Islamist-Leftist coalition, as I wrote in August 2015, Malmö, Sweden: Where BDS brings together Islamist and Leftist anti-Semites.

The mainstream media in the U.S. has ignored or covered up this European Islamist-Leftist anti-Semitism, finding it politically more palatable to focus on “far-right” anti-Semitism, and attempts to frame any other discussion as Islamophobia.

Today in the NY Times, however, there is an Op-Ed by a Swedish journalist Paulina Neuding that succinctly summarizes the situation, and confirms what I’ve been saying for years, The Uncomfortable Truth About Swedish Anti-Semitism.

After going over the problems for Jews in Sweden, particularly Malmo, Neuding succinctly summarizes the problem as lying with Muslims and Leftists, who account for 51 percent and 25 percent, respectively, of anti-Semitic incidents as of 2013:

Swedish politicians have no problem condemning anti-Semitism carried out by right-wingers. When neo-Nazis planned a march that would go past the Goteborg synagogue on Yom Kippur this September, for example, it stirred up outrage across the political spectrum. A court ruled that the demonstrators had to change their route.

There is, however, tremendous hesitation to speak out against hate crimes committed by members of another minority group in a country that prides itself on welcoming minorities and immigrants. In 2015, Sweden was second only to Germany in the number of Syrian refugees it welcomed. Yet the three men arrested in the Molotov cocktail attack were newly arrived immigrants, two Syrians and a Palestinian.

This is a critical point. The headline for the Op-Ed almost certainly was drafted by NY Times Opinion page editors. That would be typical in my own experience, the editors write or modify the headline. That headline, however, didn’t give away just what it was that was “uncomfortable”. 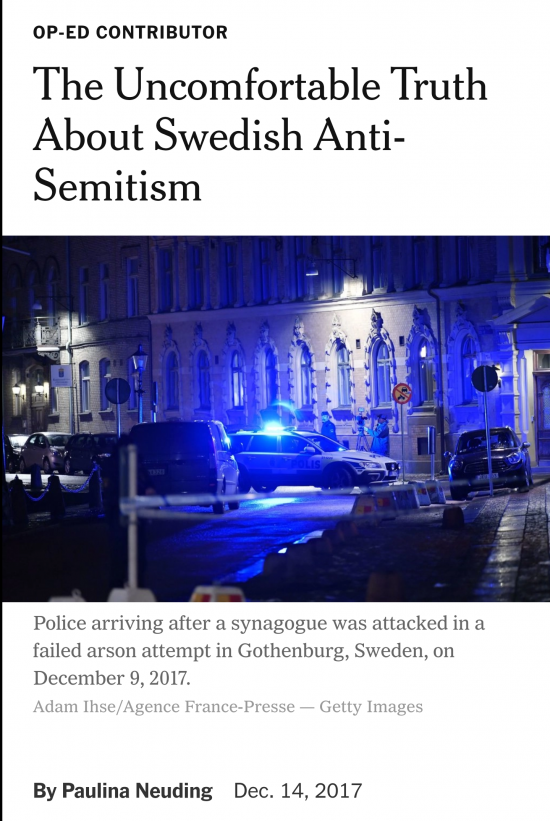 You had to read pretty far down to find out that it was mostly Muslim extremists responsible for anti-Semitic incidents in Sweden, that Leftists were the next most likely group, and that the right wing was only 5 percent of the problem.

Neuding then discussed why these facts were uncomfortable for the prevailing narrative:

The fear of being accused of intolerance has paralyzed Sweden’s leaders from properly addressing deep-seated intolerance….

But the problem has grown so dire that it finally forced [Prime Minister Stefan] Lofven to admit in an interview this month: “We will not ignore the fact that many people have come here from the Middle East, where anti-Semitism is a widespread idea, almost part of the ideology. We must become even clearer, dare to talk more about it.”

He’s right. Unfortunately, the country’s news media is often unable to speak plainly about the issue….

There are many areas in which Israel deserves criticism, but the Swedish press often crosses the line into vilification of the Jewish state and regularly insinuates that events in the Middle East are directed by powerful Jews in the West. This risks stoking already dangerously high anti-Jewish sentiment.

No efforts to prevent radicalization will be successful, Neuding concludes, in the present situation of refusal to speak the truth about the problem:

None of these efforts can be successful, however, without openly acknowledging the nature of modern anti-Semitism in Sweden.

I first noticed that the media was concealing the truth about anti-Semitism in Europe after some mob attacks on Jewish synagogues were blamed on “French citizens” without mentioning that they were all Muslims.

The day is drawing closer and closer when THE issue will have to be faced head-on: namely, Islam and its doctrine of jihad by which all non-Muslims are to be brought under the yoke of Islam.

Robert Spencer has been saying this for years. Recently he’s pointed out how the coming of this event has been accelerated by the greater number of attacks in the West. No one, esp. politicians, law enforcement, the left, wants to face this issue. After every attack they are so quick to proclaim that such-and-such was NOT Islamic terrorism. When we all know that these attacks are in fact Islamic terrorism.

Tolerance of supremacist, totalitarian and belligerent ideologies is not “tolerance;” it is collaboration. This applies to the ideology of “Submission” as much as it did to National Socialism in Germany.

The difference between the Swedes and muslim immigrants is that Swedes want to talk about it and the muslims want to kill about it. I am astonished that the left in Sweden are so blind to the problems brought into their country by allowing desert thugs in and then being surprised at how they act. As any nation knows, it takes several generations for an immigrant group to begin to change. They don’t have that much time.

Ah yes, Multiculturalism – the act of a tolerant understanding culture allowing a hostile strong culture to take over the entire society such that the former culture is all but erased. The result is how those of the former culture are terrorized and intimidated into becoming all but a member of the later all the while wondering about how this all happened and proving how all cultures are not equal (some are good and some, gasp, are bad or even evil).

Old:
“War is Peace; Freedom is Slavery; Ignorance is Strength”

New:
“Tolerance is Conformity; Diversity is Identicality; Society is Tyranny”