The GOP cannot afford to lose his vote. 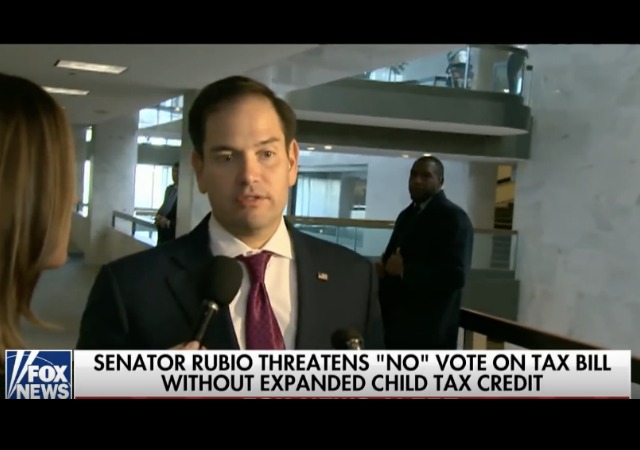 The GOP’s vision of passing a tax bill in the Senate is slowing fading as Sen. Marco Rubio (R-FL) has threatened to vote no on it unless the bill expands the child tax credit. From The Washington Post:

“I understand that this is a process of give and take, especially when there’s only a couple of us fighting for it, the leverage is lessened,” Rubio (R-Fla.) said Thursday in the Senate. “But given all the other changes made in the tax code leading into it, I can’t in good conscience support it unless we are able to increase [the child tax credit], and there’s ways to do it and we’ll be very reasonable about it.”

Sen. Mike Lee (R-Utah), Rubio’s partner in pushing for the expanded child tax credit, is undecided on whether to support the Republicans’ final tax bill, according to a Lee spokesman.

What is the child tax credit? It’s meant to offset the expenses you pay to raise a child. Right now, it’s worth $1,000 and refundable if the tax credit is more than the total amount of income taxes you have to pay. You have to make at least $3,000 a year in order to qualify. It’s not available to those with a tax rate of 15% or higher. The credit phases out throughout the tax brackets, too.

The new tax bill has the child tax credit at $2,000, but a maximum of $1,100 is refundable Rubio and Lee want it set at $3,000. As I said before, right now, it’s for those who make at least $3,000 a year. Rubio and Lee want to include those “who pay payroll taxes but do not earn enough to pay income taxes to claim the expanded credit.” This change “would expand the credit by $80 billion over 10 years, a smaller change than they proposed for the Senate bill.”

The GOP cannot afford to lose Rubio. Sen. Bob Corker (R-TN) voted against the bill the first time and has not given any inkling that he will change his mind. That means if Rubio votes no, Vice President Mike Pence will have to come in and cast his tie break vote.

But that won’t be necessary because moderate Sen. Susan Collins (R-ME) has not come out as 100% behind this bill along with Sen. Jeff Flake (R-AZ). If Senate Majority Leader Mitch McConnell loses Rubio, Corker, Flake, and Collins, then the bill will fail.

President Donald Trump thinks Rubio will change his mind. From The Hill:

“I think that Sen. Rubio will be there for sure,” Trump told reporters at the White House after a speech on deregulation.

The president called “a great guy” who has been “very supportive” of his agenda.

Asked about Mr. Rubio’s announcement, White House Press Secretary Sarah Huckabee Sanders said the administration was “extremely excited about the progress we’ve already made to double the tax credit” but said it would “continue working with the senator.”

“We’re going to continue working with them to get the job done,” she said. “But we think we’ve made great strides and frankly pretty historic movement in terms of the child tax credit.”

Sen. Tim Scott (R-SC) has worked on the child tax credit and told the Wall Street Journal that it’s “moving in the right direction.” Senate Finance Chairman Orrin Hatch has not spoken to Rubio, but he has some concerns.

Senate Majority Whip John Cornyn (R-TX) wants the final vote on the bill next Tuesday. This may not happen due to these questions that remain, according to NBC News:

“If you just add up the things we know, it seems they’re pushing in the direction of more cost,” Marc Goldwein, senior vice president for the Committee for a Responsible Federal Budget, which advocates for fiscal discipline. “But here’s what else we know: They’re only allowed to have it cost $1.5 trillion. There must be offsets somewhere.”

Rubio is such a Democrat.

and he wanted to run for POTUS LOL

notamemberofanyorganizedpolicital in reply to 4th armored div. | December 14, 2017 at 7:57 pm

People who live in Foam Houses shouldn’t piss off others….

Rubio is still running for President.

He’s still losing. I don’t doubt that he’ll change parties not too far into the future.

Rubio wants more of a Child Tax Credit, this does not seem to be anything I can argue against. Less taxes specifically designed for families. Families and less taxes. Rubio seems to be talking my language. I don’t want the whole tax bill scrapped but Rubio is championing ideals that I think a lot of us can wholly support…and fighting for some of these things in the late stages always happens.

If it weren’t for the fact that illegal aliens with nieces in Mexico claim this, I’d be all for it.

What Rubio wants is for people who pay no taxes now to get tax relief. Part of the $2000 child tax credit is already refundable if the taxpayer doesn’t pay any taxes but Rubio wants all of it to be refundable even if the family pays no taxes. This may turn out to be the most expensive thing in the bill. Since the top 20% pay most of the taxes and bottom 50% pay none, imagine how much this will cost for a family with three children that pay no taxes times 200,000,000 people.

This is a money maker for some. I know one person who gets money back, more than he pays in any federal taxes by claiming this.

I’d rather see the child tax credit reduced. Any republicans out there in the house or senate?

If not Rubio, some other Republican.

Rubio, the child, wants some credit.

people can claim children living outside the country and there is little required in proof. A lot of the funds go to illegals.There’s a lot of abuse in the child tax credit.

I am so tired of these prima donnas.

notamemberofanyorganizedpolicital in reply to puhiawa. | December 14, 2017 at 9:01 pm

What all of this means is that McConnell is hedging his bets. The bill will be defeated, either by the Senate or the House. So far, there are enough Republican Senators available to kill the bill. Rubio is a safe Senator having been reelected in 2016 and is, therefor, one of the alternates. But, he still has a long political career ahead of him and he needs a reason to vote against the bill. And, there are several “problems” which have to be worked out before any bill can be voted upon by both houses. It is likely that these minor changes will keep cropping up until there is no time to hammer out and pass a bill before the Christmas recess.

Time for another course of Granny McConnell singing ‘Why Noting Can Be Done”.

Go to the internet and find IRS Publication 972 “Child Tax Credit”.
Typical indecipherable overly-complicated worksheet – make this go away, SIMPLIFY the tax code! Either delete the credit entirely, or make it a 1 line instruction and box to fill out.
Lawyers are not problem solvers!!!!

Perhaps the good people of Florida would want to nominate a genuine conservative rather than a Commicrat .