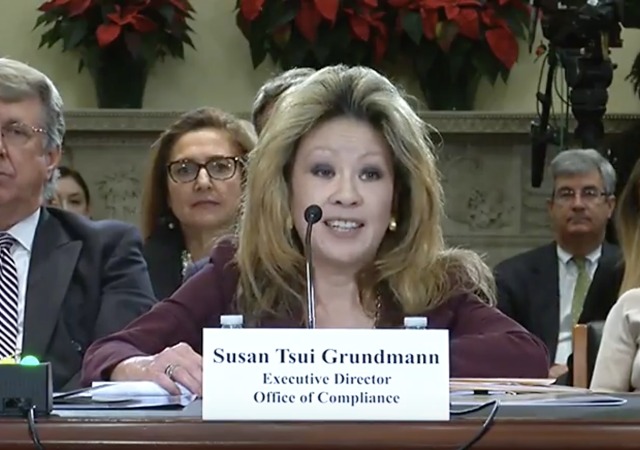 Demands for answers have been shouted out almost every day since The Washington Post reported how the Office of Compliance for Congress has shelled out over $17 million for 264 settlements and award over various violations. This includes sexual harassment.

The Ethics Committee promised to get to the bottom of it as shouts of ‘unseal the deals’ rung out. They’re having trouble, though, because the Office of Compliance isn’t cooperating and withholding important details.

The exchange occurred during a hearing with the House Administration Committee “on Capitol Hill’s workplace harassment policies.” Now Congress wants to look into making changes to the 1995 Congressional Accountability Act. The committee “is reviewing potential proposals to hold lawmakers accountable and empower victims, including tracking every settlement made informally and formally.”

The chairwoman of the House Ethics Committee, Rep. Susan Brooks (R-Ind.), and the panel’s top Democrat, Rep. Ted Deutch (Fla.), had asked the office tasked with handling workplace disputes on Capitol Hill to provide records about allegations of sexual harassment and other violations involving current lawmakers and staff.

Brooks expressed frustration that the Office of Compliance is not able to comply with the request from the Ethics Committee as a result of strict confidentiality limitations.

“So we’re not getting anything,” Brooks said at a House Administration Committee hearing on Capitol Hill’s workplace harassment policies.

The Office’s hands are tied because of confidentiality agreements the victims are often forced to sign. We heard about it in cases against Rep. John Conyers (D-MI) and Rep. Blake Farenthold (R-TX).

Before the hearing took place, Office of Compliance Executive Director Susan Tsui Grundmann told the committee members “that she could only provide limited access to records for certain cases that resulted in hearings.” From USA Today:

The compliance office provided this answer by letter on Thursday: “All counseling and mediation conducted by the Office of Compliance is ‘strictly confidential’ and all administrative proceedings and deliberations are ‘confidential’.”

Susan Tsui Grundmann, executive director of the compliance office, said she could only release information if a case had gone to a hearing officer and if the complainant had been consulted. Many cases are settled before they reach the hearing stage.

“The law doesn’t allow us to release anything to your committee,” Grundmann told Brooks on Thursday. Brooks participated in Thursday’s hearing because she is the chairwoman of the House Ethics Committee, which could investigate sexual harassment allegations if it had the names of accused lawmakers’ offices.

Last month, BuzzFeed reported that Conyers settled a wrongful dismissal claim with a former female employee who claimed he fired her after she refused his sexual advances. The article also contained the grueling process the victims must go through.

Without a human resources department, an employee must report sexual harassment to the Office of Compliance within 180 days. This will lead “to a lengthy process involves counseling, mediation, and requires the signing of a confidentiality agreement before a complaint can go forward.”

Once that ends, the employee may opt to take the case to federal district court or it can go to “an administrative hearing, after which a negotiation and settlement may follow.”

Matthew Peterson, the law clerk that represented the woman and “listed as a signatory,” also spoke to BuzzFeed:

The process was “disgusting,” said Matthew Peterson, who worked as a law clerk representing the complainant, and who listed as a signatory to some of the documents.

“It is a designed cover-up,” said Peterson, who declined to discuss details of the case but agreed to characterize it in general terms. “You feel like they were betrayed by their government just for coming forward. It’s like being abused twice.”

You know that if any of these complaints would have involved Trump or anyone close to him they would have already been published on the front page of the NYT.

That’s how “confidentiality” works these days.

Trump or any other R.

Which gives us a pretty clear focus that the vast majority of complaints and settlements will have been against Democrats. You know, the Democrat Party, the party not waging a war on women?

“The Office’s hands are tied because of confidentiality agreements the victims are often forced to sign.”

They make it sound like the confidentiality agreements are there to protect the perps and not the victims. If so, we have absolutely no general interest in protecting criminals and sexual harasser congressmen. If the office really wants to protect victims, simply redact the names.

Love the photobombing in the picture. Minutes of fame. Is that our good professor? 😉

Secrecy of government records of any kind should not apply to congressional investigations. The director should be held in contempt of congress for withholding evidence.

She is protecting the victims. However they structure the settlement to be joint. And there lies the duplicity.

If the confidentiality agreements are there to protect the victims, then why are they being forced to sign them?

“The Office’s hands are tied because of confidentiality agreements the victims are often forced to sign.”

Where is a good leaker when we need one?

Fire the director for “having a bad attitude.” Then ask her deputy to release the list. If he/she has a bad attitude, fire him/her as well. Continue until you reach a bureaucrat with a high self-preservation instinct.

You shouldn’t have to go more than 2 levels down.

180 days… Just like the dysfunctional school system with the highest level of sexual exploitation… Protecting the school district/politician… Not the victim/families.

Office of Compliance is clearly a misnomer. Why are there secret agreements with citizens, using tax payer money? There should not be non disclosure agreements involved. If non disclosure is wanted, the Congressman needs to use his own money, no Government or campaign funds allowed.

An Orwellian name for a gummit agency if there ever was one.

“The law doesn’t allow us to release anything to your committee,” Grundmann told Brooks on Thursday.

A matter of law, eh? Congress is supposed to have something to say about laws … and changes to them.

Of course as we know, Congress is pretty good at avoiding anything which might actually be useful. And I’d expect them all to come through for themselves yet again. This law protects Congressmen, and they’ll do nothing to change it. But when it comes to the kabuki stuff, well … the show must go on.

And yet, no leaks from the Office of Compliance. What gives?

Conversation I’ve just had a minute ago with my (thoroughly a-political) wife:

“Honey guess what happened to that disclosure of records of sexual assaults and stuff, in Congress?

“You tell me, I have no idea, sweet”, she answered.

“Well, the office that has those records says they simply cannot release them.”

“They said it is against the law”.

(my wife of fifty years, thoroughly disinterested in politics all her life, was not fooled for a second….

Looking forward to the 2018 election!

Amazing that your wife gets it. All the “Elites” can’t figure out that we have figured “them” out to “our” advantage. 🙂

Yes, it’s in the Sleaze-bag Politician Protection Act of 2013, I remember them passing that on St. Patrick’s Day eve, when nobody was paying attention. Good times.

And the reason they cannot release the documents with personal details of the victims redacted?

I’d be content with just knowing what the monsters did not who their victims were.

““The law doesn’t allow us to release anything to your committee,” Grundmann told Brooks on Thursday. Brooks participated in Thursday’s hearing because she is the chairwoman of the House Ethics Committee, which could investigate sexual harassment allegations if it had the names of accused lawmakers’ offices.”