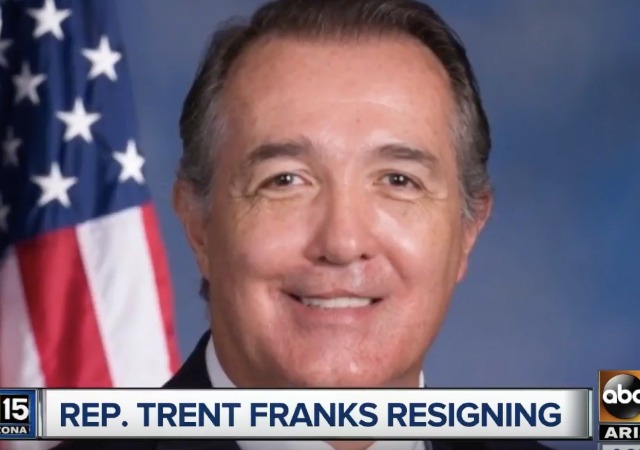 More details have come out after reports revealed that Rep. Trent Franks (R-AZ) asked former female aides to carry his baby. In his resignation statement, Franks insisted he never “physically intimidated, coerced, or had, or attempted to have, any sexual contact” with members of his staff.

However, aides believe Franks wanted to impregnate them via sex. One of the aides said he offered her $5 million to have his baby and he retaliated against her after she said no.

The sources said Franks approached two female staffers about acting as a potential surrogate for him and his wife, who has struggled with fertility issues for years. But the aides were concerned that Franks was asking to have sexual relations with them. It was not clear to the women whether he was asking about impregnating the women through sexual intercourse or in vitro fertilization. Franks opposes abortion rights as well as procedures that discard embryos.

A former staffer also alleged that Franks tried to persuade a female aide that they were in love by having her read an article that described how a person knows they’re in love with someone, the sources said. One woman believed she was the subject of retribution after rebuffing Franks. While she enjoyed access to the congressman before the incident, that access was revoked afterward, she told Republican leaders.

One of the former aides spoke to the Associated Press about how Franks offered her $5 million to have his baby. She is the one who claimed he retaliated against her:

“During my time there, I was asked a few times to look over a ‘contract’ to carry his child, and if I would conceive his child, I would be given $5 million,” she said, adding that she refused to look over the contract and has never seen a copy.

The woman said the requests shocked her, and made her feel afraid that if she didn’t agree, she would face professional consequences. She said she spoke to another aide in the office, who had also been approached about surrogacy.

The aide cited the surrogacy requests as “a main reason” for leaving the office, adding that she felt retaliated against after turning down the congressman, ignored by Franks and not given many assignments.

Franks announced his intention to resign at the end of January on Thursday. But on Friday he decided to change that to immediately after his wife was admitted into the hospital.

Speaker of the House Paul Ryan (R-WI) became aware of the claims and confronted Franks, who did not deny the claims. Ryan informed Franks that he would send the claims to the Ethics Committee and told him to resign.

“I was approached last year about the situation, she came to me wanting some advice about how to handle this. She came to me shaking and sobbing, and she shared a story that I think is horrific, a powerful man hiring young women, procuring staff, to potentially surrogate children for him,” Lafferty said. “I accompanied (the former aide) to the meeting in the speaker’s office where she said Congressman Trent Franks offered her $5 million if she conceived him a child.”

Franks explained in his statement that he and his wife have struggled with infertility. They conceived their twins with the help of a surrogate, but really want to give them a sibling.

Franks has been in Congress since 2003 and known as a fierce conservative. He is a member of the House Freedom Caucus. The Arizona “state law requires a special election to fill his seat for the remainder of the term.” Unlike the Senate, a vacant seat in the House has to be filled by an election.

What rocks do our Congresscritters crawl out from under.

This is just stupid behavior. With government leaders this stupid – why would anybody thing government is the answer to anything?

I am finding this difficult to believe.

But this is the time to be guilty until proven innocent, Inquisition by the press and accusation, so hey! Why not?!

My personal opinion – the conversation came up about how he had his current children, but they didn’t like it. Snowflakes can’t take conversations that make them FEEL “uncomfortable.”

Grow up ladies!! It’s Congress, and reality! If he didn’t say something sexual – as in, “You’re cute/sexy/etc. Let’s get it on! Have my baby – then let me and my wife adopt it!” or something similar, it’s a conversation. Uncomfortable feelings do not harassment make.

The presence of a contract and his hasty resignation would suggest otherwise. The fact that the ladies didn’t read it though (which is understandable) leaves the press wildly speculating about what it said.

The reason this happened so quickly is due to the fact that there seems to be tangible evidence out there.

Yes I agree. If Trent fought this I would agree with DINO but the fact that he resigned so quickly suggests real issues.

how about- this guy is a very naive idiot.
he should have contacted agencies which specialize in surrogacies.

How much does it cost to hire a surrogate mother?
Every surrogacy case is unique and involves factors that can impact the overall fees and price. The average cost of surrogacy can range from $90,000 to $130,000 depending on the individual arrangements. In states like California, where surrogates are in high demand, the cost may be slightly higher.

the offer of 5 Million, does not sound like a request for sex, but a request for a particular woman to be a surrogate – still very weird.

the quick resignation as stated was due to wife being hospitalized and there was no upside to stay in the news.

just strange but not harassment.

Yeah I read this and wonder what the real story is.

Politico seems to have intentionally or unintentionally forgot about a 3rd option: artificial insemination. This method would not go against his beliefs about discarded embryos and would not ask for sex.

What he did was still wrong, though, as he needed to approach someone about surrogacy who didn’t work for him.

A bit of an odd situation, asking a co-worker/subordinate to be a surrogate. However, he is now guilty because they inferred they would have a hostile work environmen if they didn’t accede to his wishes? Sounds a bit shaky to me.

It’s not absolutely odd. The oddness is directly proportional to the consanguineal degrees of separation and inversely proportional to the surrogacy class (e.g. physical proximity). So, a request to your sister would be less odd than a friend than to a stranger. A request to have a sexual relationship would be more odd than artificial insemination.

adding that she felt retaliated against after turning down the congressman, ignored by Franks and not given many assignments.

“Not given many assignments …” Yeah, sure sounds like he had it in for her. But when he did give her an assignment—that dumb contract—to examine, she didn’t do it. That’s not a good way to get more assignments. It also raises a professional question … if “she refused to look over the contract and has never seen a copy”, how does she know what was in it? Perhaps she had an anonymous source.

She came to me shaking and sobbing

Oh, pul-leez. Sounds like a snowflake alert is in order. She’d really fall apart if, say, Muslim terrorists stole all the paper towels in the ladies’ room; or if the coffee machine was out of decaf. Hey, life is tough all over.

So he wanted someone he knew, liked, trusted and who would greatly benefit to have his baby. Not sure if he did anything wrong. If your not interested just say know.

As a politician, he should be better at reading people and situations and risks.

It looks like the consequences of the 1960s counter culture sexual revolution are coming home to roost, aided and sped up by the no longer necessity to cover for Bill Clinton.

But I have to ask three questions. Did they bother to ask if the process involved having sex? Did they really believe a guy who would not be involved in an abortion would be involved in an extramarital affair? He has resigned. Basically game over. Why argue about what happened?

too dumb to be a congresscritter.
might make a good neighbor, but i wouldn’t want him as a boss, who can’t foresee the consequences of his actions.

His wife must have been in alot of distress and embarrassment when this crap hit the fan.
can’t see how he would have survived as an elected official.

So, Franks asked some of his female staff if they would serve as surrogates for he and his wife. They refused and the worst “retaliation that any of them can come up with is that he continued to pay them for coming to work but gave then less work to do. None left due to harassment of actions to malign them by Franks.

So, all this is believable, until we get to the part about this accuser turning down $5 million dollars to carry Franks child. 5 MILLION DOLLARS!!! So, here we have a woman who doesn’t complain about the offer of $5 MILLION, even if she assumed that it was for sex with Franks, but that he lightened her work load while continuing to pay her the same salary. There are a few thousand people working for Amazon who would take that job in a heart beat. Even if this happened, I find it difficult to believe that this woman suffered the moral outrage that she is now claiming.

I would love to depose some of these women. I think that the results would be vveeerrryy interesting.

He must be a very rich guy.

I do not believe the the offer of money to be a surrogate to be true?

Why? Because I have not read of a young millennial cashing a check for $5MM to be his baby momma.

If there had been an offer for $5MM among the atheist millennial crowd, it would have been taken.

There has never been a better time to be a sugar daddy because of the millennial “seeking arrangement” world. Everything is for sale with them. I know a number of men that have resolved not to suffer the financial pain of a divorce again and are keeping up a little trollop.

This is the Obama Department of Education student rape courts on steroids.

Franks is told to resign by Ryan before the investigation by the House Ethics Committee.

me too.
or I’ll find a suitable woman that’ll do it for a million, and I’ll be the broker…

“She came to me shaking and sobbing…”

About something that happened some time ago