Meanwhile, the Los Angles City Council votes to “require businesses with city contracts to disclose if they are working on Trump’s proposed border wall” 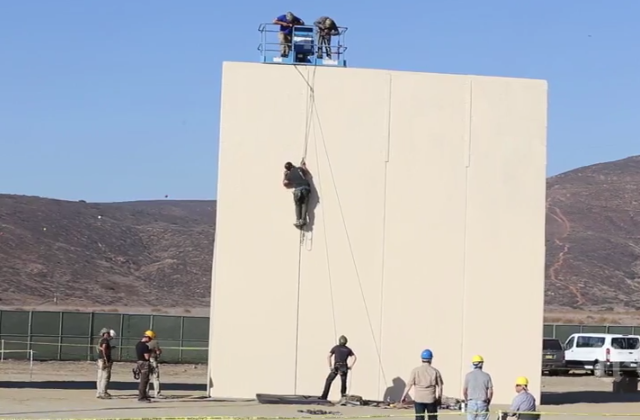 Legal Insurrection readers will recall our story in September that construction had begun on prototypes for President Trump’s border wall in the San Diego area.

The prototypes are now complete, and testing has begun!

U.S. Customs and Border Protection (CBP) began physically testing southwestern border wall prototypes this week, according to a spokesman for the department.

Construction of eight wall prototypes in the San Diego sector were completed on Oct. 26. Six companies were chosen to build eight sample walls — four made of concrete and four of other materials.

Testing will include how easily someone can go over, under, or through the units.

Officials have begun testing how easily someone can climb over the border wall prototypes near the Otay Mesa port of entry, progressing to the next phase of a process that may make President Donald Trump’s “big, beautiful wall” a reality.

“This phase is not structured as pass/fail but rather the results will provide CBP leadership the best attributes among the constructed designs for inclusion in future border wall design specifications,” said an official from Customs and Border Protection.

The testing will not include the use of explosives or vehicles-as-battering-rams, however.

Officials will use items such as jackhammers, saws and hydraulic tools to attempt to breach them.

During the procurement process, the companies were required to build the walls at least 6 feet deep. The depth of the walls was evaluated during the construction process, according to Diaz.

All eight prototypes were required to be 18 to 30 feet high and designed to deter illegal crossings.

The prototypes were built side by side to the current secondary wall in San Diego, which already has a primary and secondary barrier.

Time lapse video of the border wall prototypes, when they were being built in San Diego. Next phase underway: testing and evaluation period. #BuildTheWall #MAGA???????? pic.twitter.com/c3nk6X0QBl

Meanwhile, in Los Angles, the City Council has voted to force contractors building the border wall disclose themselves . . . a scarlet letter “T” for their audacity to participate in Trump’s border wall construction?

As an extra gesture of defiance, the city leaders also approved an anti-Trump declaration.

The council’s Immigrant Affairs, Civil Rights and Equity Committee voted to formally adopt the “sanctuary” label and to require businesses with city contracts to disclose if they are working on Trump’s proposed border wall. The full council must sign off on the proposals.

Good to see Los Angeles politicians focus on the important stuff…instead of things like infrastructure and fire protection!

California thinks they have succeeded already, time to send in the troops

Lindsey vonn Stupid could try and ski through it at 70 mph. That way, she’d really get to ski for her country.

Vonn Stupid is the colin pumpernickel of men’s tennis.

Any company, especially those furnishing goods not produced in California, should tack on a 25% surcharge on any goods sold in a “Sanctuary City or County” in California. Make them pay a price for their posturing.

I can only imagine the mind numbing voluminous specifications and testing parameters detailed by lard bottomed pencil pushers.

ALL Federal Funds allocated for CA should be immediately withdrawn. Not complying with Federal programs ,, no money for you !!!

I think a good lawfuit would see that City Council requirement of disclosure wind up in the trash bin.

The post-the-traitor-FDR fascist-Left “democrats” having imported the fifty-millions-strong hostilely-colonizing criminal-alien force necessary to our beloved fraternal republic’s destruction, is now mounting overt attacks upon the nation in which we live and in which we have our being!

Thanks for this update.
I missed anything on the testing phase.

LA can require almost any disclosure that they desire. They can not, however, discriminate against a company, which qualifies for a city contract, on the basis of whether they are involved in building a border wall. This is probably political posturing, at this point. If it turns into discrimination, then it could cost the City a large amount of money.

I’m glad to see that testing on the effectiveness of potential barriers is being done. We have current sections of supposedly secure barrier which are a joke.

I’d like to see if they could do anything with lasers on poles mounted every couple hundred yards.
You could knock down a drone as well as cover ground traffic.