8 mini-walls will be built in 30 days as San Diego braces for potential protests. 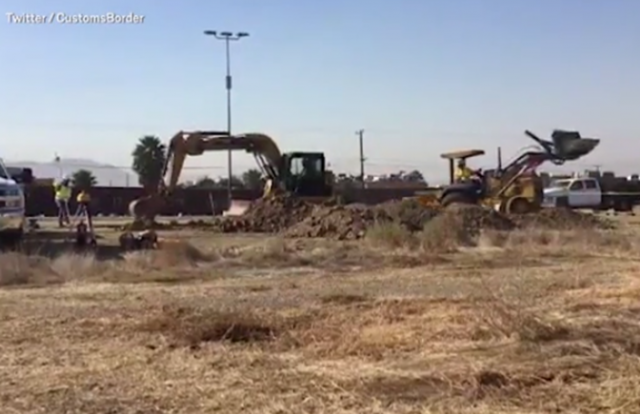 Despite a recent lawsuit from California politicians, construction of the President Trump’s border wall has entered an exciting new phase of construction.

Legal Insurrection readers will recall that the Department of Homeland Security had an open-call for plans, and hundreds of construction firms submitted blueprints for consideration — despite threats of boycotts from disgruntled immigration activists. Eight plans made the grade and prototypes are being assembled along San Diego’s Otay Mesa Border.

The building process will last about 30 days, Customs and Border Protection said.

The agency may pick several winners, or none. It said in a news release that the prototypes ‘will inform future design standards which will likely continue to evolve to meet the U.S. Border Patrol’s requirements.’

…The details of the design remain unclear. Each prototype will be up to 30 feet high and 30 feet long.

Bidding documents say four of the prototypes are to be solid concrete and four are to be made of ‘other materials.’

Trump said Friday that the wall should be see-through, appearing to cast doubt on the concrete designs.

The construction site is close to the existing high-security fence which marks the border through San Diego and to the east.

The San Diego County Board of Supervisors voted Tuesday to ban items that could be used as weapons, such as baseball bats, knives, and rocks, in certain areas where border wall prototypes will be built.

An area has been designated in Otay Mesa, near the U.S. Mexico border where large crowds may gather in a “free speech zone.”

…County officials said they want to restrict protestors from using any weapons that could be used to disrupt the peace.

The board’s unanimous vote gives law enforcement the authority to issue misdemeanor citations to those who bring items that could be perceived as weapons to areas authorities deem to face credible threat for violent demonstrations.

And while no protests have been reported (yet) there has been an accident that injured one of the workers.

A man plunged 40ft down a hole at a Mexico border wall construction site.

…He survived without suffering serious injuries and was back at work shortly after.

US Customs and Border Protection (CBP) spokesperson Carlos Diaz described the incident as a ‘misstep’.

Here is some diversity we might all appreciate: The contractors who were selected to proceed with prototype development.

It will be interesting to see what the final products will look like in 30 day!

In today’s world, cynicism is easily justified. It just seems something’s fishy about all this. I fear it’s kabuke theater to keep Trump supporters mollified.

Hey, it has Leslie all excited! So there’s that…

I wonder how Ann Coulter feels about it?

On a more practical note, I’ve operated cranes lifting concrete panels from a horizontal to vertical position (tilt-wall), and I can tell you it’s very complex. I very much doubt that will be the mode of any actual wall that gets built.

Fences are MUCH cheaper, less demanding, and do the same things better. For all that’s worth.

No wall is perfect – they generally decrease passage in their area by 95%. Some but not all and usually not most of the traffic moves elsewhere. Eventually the illegal traffic becomes cost-ineffective.
So it really depends on the location and types of threat and desire of cost.

How do you know they haven’t been through the model phase already?

Or perhaps this is kabuki theatre for the unhinged left to distract them from something somewhere else? 🙂

Or maybe space aliens who support Trump are behind it. You’ve got to stretch those apologetics muscles.

I wonder if there will be a testing phase. And, if so, what so of measures might be used and whether Humpty-Dumpty will participate.

Does anyone know if these are being built end-to-end, so that they will form one continuous piece when completed?

I look forward to taking a day-trip to San Diego to check these prototypes out during the end stages of construction.

What happens from here really depends on what they’re actually demonstrating.

More likely the purpose is to demonstrate the capabilities of contractors. Which ones can actually put up a wall without endless unexplained delays … or crippling strikes … or ruinous cost overruns … or will fold up the tents and go home at the first sign of a protest?

Or, perhaps it’s a test, to see which wall protesters hate the most. That would most likely be the one we want.

Or it’s Federal procurement rules, which unlike Obamacare are specified down to micromanagement levels of detail by Congress….

And that’s allowed all sorts of lawfare:

“PennaGroup submitted comments by email on the final day allowed for complaints but these were derailed by an internet service disruption during stormy Texas weather, said Michael Evangelista-Ysasaga, the company’s chief executive. He said the company plans to sue over the decision.

“It’s certainly not over,” he said.

U.S. Customs and Border Protection said it expected to award contracts for wall prototypes in San Diego in the next few weeks but didn’t rule out the chance of further delays.

“We note that, with the award of contracts, unsuccessful bidders will have new opportunities to file protests, which could further delay construction. However we are confident in our processes, and we will proceed deliberately, to ensure compliance with the law,” the agency said in a statement.”

And there’s been one attempt already:

“During the last several months, the company’s CEO has ridiculed Trump’s immigration reforms and the border wall, which would provide a symbolic and concrete barrier between low-wage employers in Democratic-run cities and the world’s bottomless supply of cheap labor.

“We wanted to make sure that a company that had compassion for immigrants was one of the companies putting in one of the designs,” CEO Michael Evangelista-Ysasaga told the Guardian newspaper. The newspaper added:”