Another massive wildfire in Ventura County has already destroyed 150 structures and forced the evacuation of thousands. 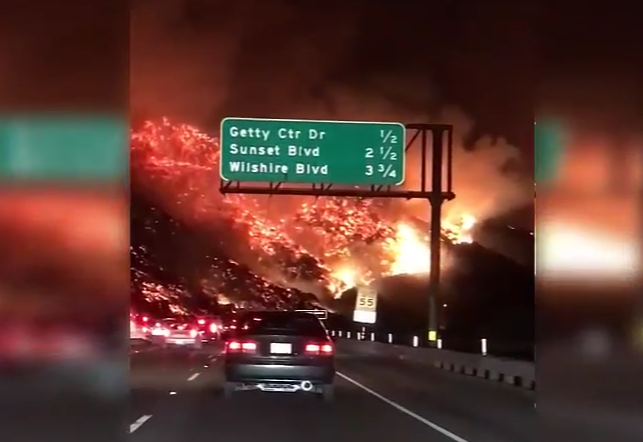 California’s Wine Country has been steadily recovering from the devastating wildfires that ripped though and Napa and Sonoma valley area this past October.

Now, one of the wealthiest communities in the state and one if it’s cultural treasures are being threatened by new blazes that have broken out during the region’s infamous Santa Ana wind cycles.

The hills north of Los Angeles were burning Wednesday as the wildfires that have already devoured a large swath of Ventura County menaced the nation’s second-largest city.

With several multimillion-dollar mansions in the tony Bel-Air neighborhood already ablaze and flames threatening the Getty Center arts complex and its priceless collection, officials closed down part of Interstate 405 — a key north-south artery. All the while, firefighters rushed to contain the blaze.

…The massive blazes showed no signs of stopping as roaring winds fueled flames that feasted on the tinder-dry conditions in the region. And by midmorning, it had already consumed a half-dozen mansions and 150 acres of some of L.A.’s most expensive and desirable properties, The Los Angeles Times reported.

While helicopters bombarded the blaze from above with water drops, some 125 firefighters armed with chainsaws struggled to clear away the thick brush that was feeding the fire.

Police ordered an evacuation of all homes between two of the city’s most storied roadways — Mulholland Drive on the north and Sunset Boulevard on the south — as thick black smoke and swirling ash turned day into night.

The Ventura County blaze, known as the Thomas Fire, has expanded to 65,000 acres and still has zero percent containment as the blaze continues to rage Wednesday.

The blaze has destroyed at least 150 structures, and Cal Fire said 12,000 more are threatened.

The fire ignited Monday evening and has steadily increased in acreage, jumping the 101 Freeway near Solimar Beach Tuesday night and charring 70 square miles.

More than 7,000 homes in Ventura County were under mandatory evacuation as the blaze closed in on downtown Ventura, where multiple structures were reportedly burning. Fire officials said 27,000 people were evacuated from their residences.

Governor Jerry Brown has already declared a state of emergency.

“This fire is very dangerous and spreading rapidly, but we’ll continue to attack it with all we’ve got,” the governor said in a statement. “It’s critical residents stay ready and evacuate immediately if told to do so.”

The declaration allows additional state resources to go toward fighting the fire. According to the declaration, the California National Guard will mobilize to support response and relief efforts.

Here is a satellite image to put the scale of the wildfire disaster in perspective: 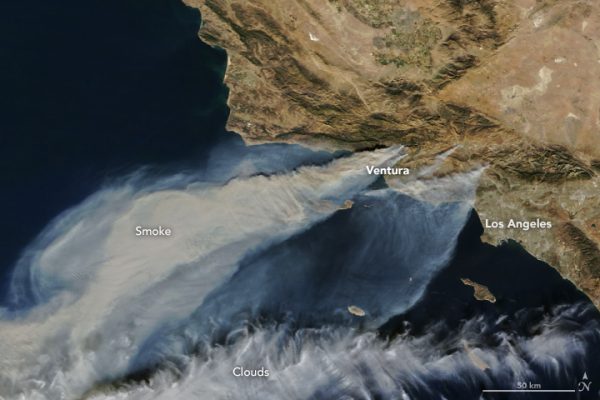 For those keeping track, the fire around the Getty Museum has been designated the Skirball fire, after another cultural center that is adjacent to the iconic art center and near where the wildfire was initially reported at 5 am in the morning. Fortunately, Getty Museum was built with thick walls and enhanced fire doors as part if its design.

Smoke detection and sprinklers are ever-present along with pressurization systems to keep smoke out or reverse flow if it does get in.

The center has its own reservoir to supply suppression systems if necessary, and there’s an on-site helipad to fill helicopters with water. Hydrants throughout the extensive property are fed from a large-diameter loop.

The immediate zone around the building is kept green with fire-resistant plants, and the expansive acreage surrounding the campus is rigorously kept clear of grasses. Canopies of oak trees also serve to suppress the growth of vegetation that could feed a fire.

The Getty Center closed the day before the fire to prevent any harm to its collection from smoke from existing fires in Venturya.

However, art masterpieces are not the only treasures that are being rescued.

As a family’s mansion burned to the ground, all the homeowner wanted saved was a Christmas tree and a holiday wreath hanging on the door.

CBS2’s Jeff Nguyen reported live as the massive home came crashing down. He later showed the spot where firefighters pulled the tree filled with years of family ornaments, and the wreath to a safe spot near Via Ondulando in the Thomas Fire.

The homeowner told Nguyen he was on the phone with firefighters with little time to spare.

“If we could save just one thing, what would you want it to be?” the firefighter asked the homeowner.

“Please save my Christmas tree for my kids because it’s got so many memories,” the man desperately asked.

Meanwhile, in my hometown of San Diego, we are bracing for the Santa Ana. Tomorrow’s winds may gust up to 90 mph in some areas, and the humidity will be between 5 and 10 percent.

Please keep California in your prayers. While our Wine Country is well on the road to recovery, the less that burns in this new set of fires, the better for us all.

Some views from Southern California today:

Something you NEVER see in LA. The 405 freeway deserted. It’s like a scene from @WalkingDead_AMC #SkirballFire (photo courtesy of @CBSLA) pic.twitter.com/aWnh1pWdRE

This is My drive to work this. Lord “Be still”.
Praying ???? for ppl up in those mountains, LA County and myself this morning. FYI anyone on the #405 turn around ITS ON ???? #SkirballFire pic.twitter.com/F0rMsotbTa

And here is a look are the all the reported wildfires in the region:

4 primary fires burning in Southern California. #ThomasFire remains the largest but the one you’ve been hearing a lot about today is the #SkirballFire burning near #BelAir. Coverage from LA and the fire weather forecast @nbcbayarea 5:02 & :19 pic.twitter.com/32ugcYabT9

Finally, the concern for California is natiowide:

Our thoughts and prayers are with everyone in the path of California’s wildfires. I encourage everyone to heed the advice and orders of local and state officials. THANK YOU to all First Responders for your incredible work! https://t.co/g9y9PkB352

SoCal had above average rain last year… chaparral is supposed to burn every few years, to clear out the dead vegetation and restore balance to the ecosystem. there are many plants which NEED a fire to reproduce.

the problem is man: we inhibit the natural cycle by preventing fires, build things in danger areas, without designing them to be fire retardant, then plant things like pine, palm & eucalyptus trees, often right next to said buildings, which is pretty much the same thing as storing gasoline next to them.

then the Santa Anas come, as they always do, something starts a fire, and physics takes over.

The Getty is one of the safest museums in the country when it comes to fires. That said, I’m sure the insurers for the permanent collection and the various loans are experiencing a bit of discomfort this week.

how can the federal gov’t help in this disaster – we have national labs and defense contractors which help defend the USA and we need to protect them.

I’m not clear in how to ask this question, but this is a great concern for me.

You’ve got to keep the brush on the hills cleared out, so that there isn’t such an overburden of dry fuel waiting to go up like this.

California hasn’t been doing that, and once the spark is struck, it’s too late to do anything but watch it burn til it runs out of fuel. Too much area, too much dry fuel, ground too rugged.

the sjw’s won’t allow brush abatement – it;s for the snake in the grass – doncha know

My sister left her home in Ventura at 2 am Tuesday under mandatory evacuation. The house was still standing undamaged as of yesterday, but with the winds blowing, fire officials are not letting people move back. One more day of this nightmare is on tap.

The federal government has no doubt deployed whatever firefighting tools it has available. One of the problems is that when the high winds are blowing, aircraft to dump water and fire retardants cannot be safely deployed.

California experiences periodic droughts, and that can’t be changed, and it experiences Santa Ana winds every year. Along with earthquakes, all Californians can do is prepare, obey evacuation orders, and get insurance just in case. Ventura County issued emergency notifications via cell phone on Monday night and succeeding days. This probably saved a lot of lives.

merry Jerry and the AGW warriors do everything they can, like fly almost empty planes to emphasize this.

The Coulson Group has moved their air tanker operation from McClellan Air Force Base in Sacramento, California to Reno-Tahoe International Airport in Nevada. This is the second air tanker operator that has moved out of the state in the last six months. In October, 10 Tanker Air Carrier relocated their corporate headquarters from Victorville, California to the airport at Albuquerque, New Mexico. 10 Tanker has two DC-10 air tankers and is converting a third, while Coulson has one C-130 on U.S. Forest Service contract and hopes to acquire another. Coulson expects to have a minimum of 20 employees on their payroll at Reno.

So far, only four house reported burned in Bel Air. I saw one with what looked like a cedar shake roof. That’s insane. Now there is a fast-moving fire in Malibu.

Santa Anas have put the State in condition Purple. First time in years.
The Democrats have run fire fighting businesses out of the State just like they have with other enterprises. No new dams or reservoirs since 1979. Irrigation systems closed down for a smelt. Malfeasance and Democratic Party politics is coming home to roost.