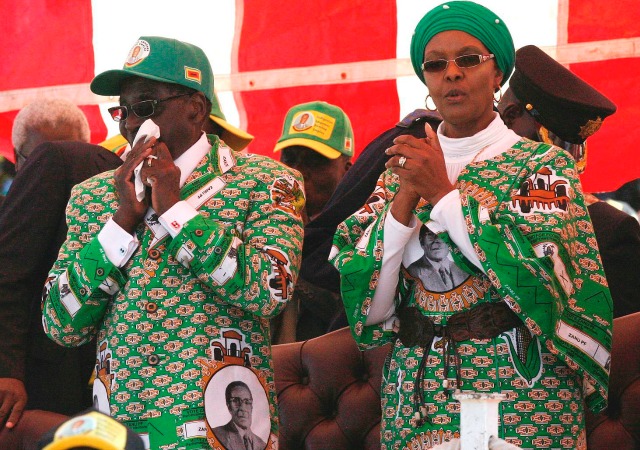 Mugabe gave a speech and many thought he would resign. He chose not to resign and vowed to continue leading. So it looks like impeachment is the next step.

All of this started last week when the military performed a “non-coup coup” by taking control of the capital Harare and confining Mugabe to house arrest. The military finally had it with Mugabe after he sacked military-friendly Vice President Emmerson Mnangagwa, which would have paved the way for his wife Grace to succeed him.

Sunday Ends in a Downer

Many political observers and fellow Zimbabweans had been waiting for Mr. Mugabe to step down as president after nearly 40 years in power. But sitting at a table while flanked by members of the military and other officials, the embattled president said he would preside over the party congress, scheduled to take place in a few weeks.

No wonder he didn’t show anyone his speech before he delivered it. From CNN:

While acknowledging the struggles and criticisms that led the nation’s security forces to seize power, and the pressure for him to resign, Mugabe said he will preside over the ZANU-PF congress in December.

“Today’s meeting with the command element has underscored the need for us to collectively start processes that return our nation to normalcy. So that all our people can go about their business unhindered, in an environment of perfect peace and security. ”

He also enumerated all the concerns raised by the nation’s security force and his own party, including the struggling Zimbabwean economy, and added they should be attended to with great urgency.

Chris Mutsvangwa, the head of Zimbabwe’s liberation war veterans and the man who has led the campaign to oust Mugabe, said that plans to impeach the dictator will continue:

Zimbabwe war veterans leader tells Reuters plans for impeachment of Mugabe will proceed, after president fails to step down in address.

Mutsvangwa also said that the “people would take to the streets of Harare on Wednesday.”

The state-run paper The Herald Zimbabwe posted pictures of Mugabe meeting with generals this afternoon.

Zanu-PF replaced Mugabe with Mnangagwa as the party leader. They also expelled his wife Grace for life.

His ouster does not mean he’s not president, but it does show that the congress has the numbers to impeach him. The opposition party MDC-T has been trying for a long time to impeach him, but Zanu-PF has stood in the way.

An impeachment vote must have two-thirds majority in both houses of parliament. The government will resume on Tuesday.

General Constatine Chiwenga, the man who has led the non-coup coup, is now facing accusations that he has sold out. The people want Mugabe gone:

Let me share with you what I am picking up. Military people below General Chiwenga believe he has sold out and might take this into their own hands. The people want Mugabe out yesterday , this might get out of control. Tonight did not help #Zimbabwe

Those generals who led the military takeover “will issue their own statement tomorrow morning.”

The body language of the generals tell a story, a story of anger and frustration. Chiwenga’s face had a look of, “Oh no he didn’t” through the speech.

Zimbabwean political analyst George Shire said that Mugabe will probably look for loopholes in the impeachment process to draw it out as long as possible.

What Led to Mugabe’s Ouster

The discussions for a take over have been taking place for many months, according to The Guardian on November 15:

The official said Mugabe would resign this week and be replaced by Mnangagwa, with opposition leaders taking posts as vice-president and prime minister. There was no independent confirmation of his claim.

Zimbabwe’s fragmented opposition has not publicly condemned the military move. Nelson Chamisa, the deputy head of the opposition MDC party, called for “peace, constitutionalism, democratisation, the rule of law and the sanctity of human life”.

Tendai Biti, an opposition leader, called for a “roadmap back to legitimacy”.

“What is key is that a traditional authority is set up which is inclusive with the opposition and the ruling party … We need a dialogue too with [regional organisations], the African Union and the United Nations. We can’t solve this problem on our own,” Biti said.

The military feels threatened by Grace:

But there are others who have been sidelined. Senior soldiers fear they will suffer if Grace and her associates take over. They also believe she will be corrupt, vindictive and incompetent, and know that the first lady’s violent outbursts and extravagance – as well as that of her entourage and sons – have already made her very unpopular.

The soldiers are also concerned about a further massive deterioration of the economy. Inflation and the collapse of the Zimbabwean currency has already impoverished many rank and file soldiers, and hit the incomes of officers too. The wages of the millions of government employees – troops, police, civil servants and others – often go unpaid for months on end. This means the seizure of power today will be greeted by many with relief, if not enthusiasm.

Mugabe is the world’s oldest leader at 93. He had vowed to rule until his death. He served as prime minister from 1980-1987 when he became president. Since then he has ruled Zimbabwe with an iron fist, a reign filled with human rights abuses and driving the country into the ground.

His wife Grace didn’t help as she flaunted her rich designer clothes as the country starved and struggled to make ends meet. The citizens snidely called her “Gucci Grace.”

It is hard to step away from the dictatorship of the proletariat. For Mugabe it has always been about power and control plus the riches that go along with it. There is still a major faction in ZANU-PF that wants the old ways to continue… in part because they believe in Mugabe and his ways. This is not going to end well even after Mugabe is gone….however he goes.

Mugabee is not in irons and not facing prosecution for genocide, he should, and so should many others in various nations in Africa and the middle-east. Outrage is reserved for wrongs done in the past and not what is currently occurring. Recent reports of open air slave markets have fallen on deaf ears. Genocide of white farmers and the attacks against Christians are ignored by the MSM. We see to a lesser extent increases in racist attacks due to mass immigration and the importation of xenophobic, racist, sexist and anti-western populations. I refuse to wear the blinders required by the Politically Correct politicians, media and academics.

Who is this Mnangagwa? Unless he is willing to stop the genocide and uphold universal human rights I do not see anything but the suffering of chairs. All should be held to one standard. Not doing so belittles those deemed by the elites as not being fit to be called equal.

Have I recently exclaimed how much auto-correct sucks?

“Who is this Mnangagwa?”

Who indeed – would you believe Mugabe’s chief Enforcer for the last 30 years?

Oh yeah, that’s the man you can count on to end corruption and ensure a better future. But, in countries like Zimbabwe, anyone who could objectively be called “good” has been killed, imprisoned, or driven out of the country long ago – so the only choices left will only be which flavor of “bad” seems preferable at the moment.

Those chairs had it coming.

How long is it going to take for him to get the hint, before or after they string him up.

Mrs. Mugabe has to rival Michelle Obama on Vanity Fair’s ‘best dressed’ list – the one that snubbed Melania Trump:

Glad I wasn’t the first to go there but you know everyone that saw that photo was thinking the same as you. The Mugabe fashion consultant has got to be on some short list.

If the Zimbabwe Parliament impeaches Mugabe look for Crazy Auntie Maxine to crow about how they are showing us the way.

Impeachment? Mugabe will be lucky if he doesn’t trip and fall 3 flights of stairs…with his wife attached to him.

Mugabe is a tyrant, but the real threat is Grace Mugabe.

Grace is the real threat because she is a trophy wife 41 years younger than Mugabe. He isn’t long for the world, even if not Impeached and Convicted he will keep his promise to die in office in the near future.