“The days are over when anti-Israel resolutions can be passed in five minutes.” 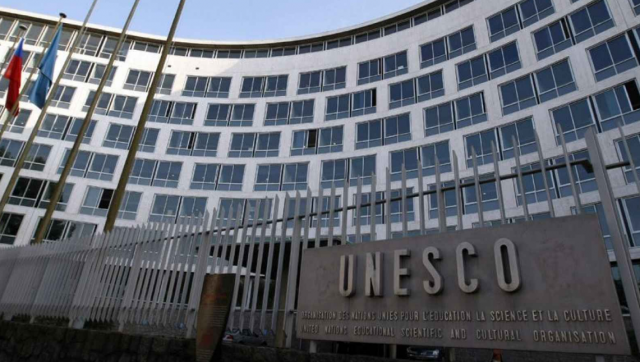 In a number of recent posts, we’ve been covering the Palestinian effort at UNESCO to erase the Jewish connection to Jerusalem, Hebron and other historical sites in Judea and Samaria (the West Bank).

As we’ve discussed, since 2011 when the UN body recognized Palestine as a state, Palestinian officials have undertaken what amounts to a cultural jihad—hijacking the UNESCO agenda by repeatedly forcing its members to consider Jewish heritage sites as purely Islamic. 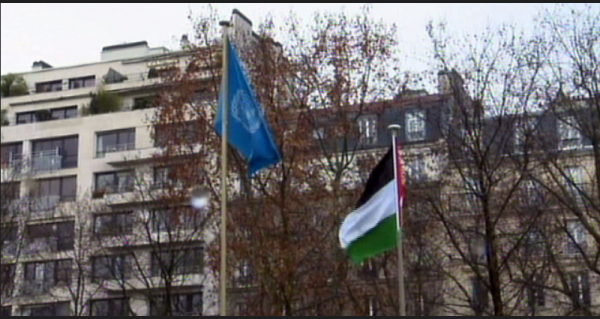 Among our recent posts documenting this bias:

Basically, the Palestinians have been successful in perverting UNESCO with an anti-Israel and anti-Jewish agenda. But as we’ve also highlighted, it’s not the case that Israel has invariably come out of all of the recent UNESCO sessions empty handed.

Back in October of last year, for example, when the UNESCO Executive Board voted to adopt the Palestinian and Arab state-sponsored resolution on Jerusalem, which purged the Jewish connection to the Temple Mount—Israel’s holiest site—there was a silver lining: a number of states that had previously supported similar anti-Israel and anti-Jewish motions in the past abstained, and several also expressed reservations.

Then a few weeks ago, there was another small victory for Israel in UNESCO—for the first time in years the Executive Board didn’t vote on any anti-Israel resolutions. Instead, it voted to postpone the resolutions by at least six months.

These moves don’t signal any major sea change at UNESCO, which is still one of most anti-Israel organizations on the planet. But they’re also not completely inconsequential. According to Israel’s ambassador to UNESCO Carmel Shama-HaCohen, they indicate that at least some member states are “beginning to lose patience” with resolutions that merely tarnish the UN body’s reputation without doing anything to advance its goals. 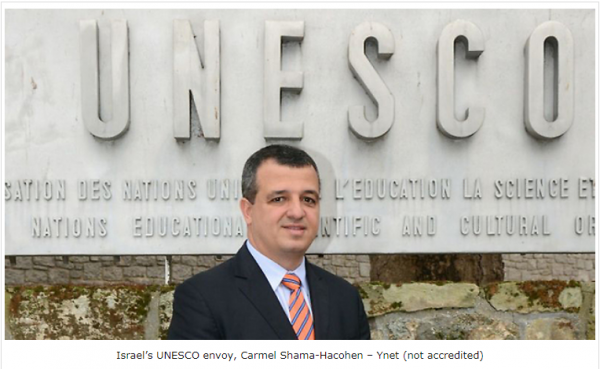 It would appear that the bloc of countries at UNESCO unwilling to automatically sign off on blatant anti-Israel motions that negate historical facts and denigrate Judaism is growing.

It’s one way to read the results of last week’s effort by the Palestinian delegation to advance yet another routine anti-Israel resolution. The Palestinians had a majority to pass the resolution and must have thought it would easily sail through—just like always.

But as it turned out, this time they were in for a few surprises.

The resolution up for consideration this past Thursday at UNESCO’s General Conference in Paris would have condemned Israel for the state of education for Palestinians living in the West Bank, Gaza, and the Golan Heights. 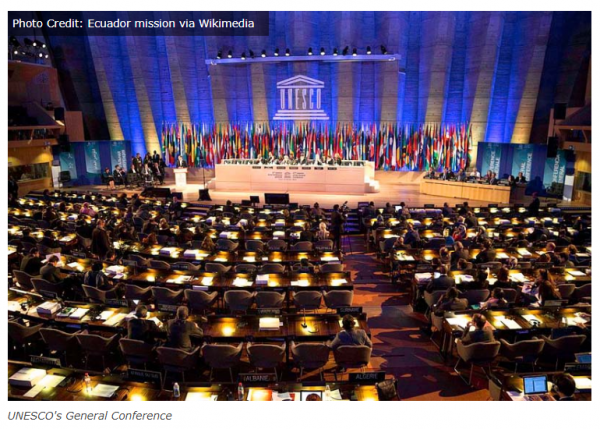 It’s pretty much a replica of the sort of insane resolutions that have passed in this UN agency for nearly a decade.

But before the Palestinian delegation could push it through, the Israeli delegation, working in conjunction with the U.S. mission, utilized a 4-hour filibuster to delay and tie up the proceedings.

It was a smart strategy because by the time the motion came up for a vote—one hour later than the session’s scheduled time to finish—many of the delegates had already left the hall to attend other pre-arranged meetings and receptions. So the Palestinians no longer had their majority.

Discussion at UNESCO’s education committee was slated to commence at 3 pm, with the expectation being the measure would be approved within minutes by general consensus and without going to a vote, as has been the case in the organization since 2009…

The Palestinian delegation clearly had a majority to pass the resolution, and the Israeli mission to UNESCO therefore forwent any attempt to drum up votes from countries to vote alongside it.

Instead, Israel—with American support—endeavored to make use of every conceivable article in UNESCO regulations to stall for time, for example by asking for a roll-call vote of all of the organization’s 198 member countries.” 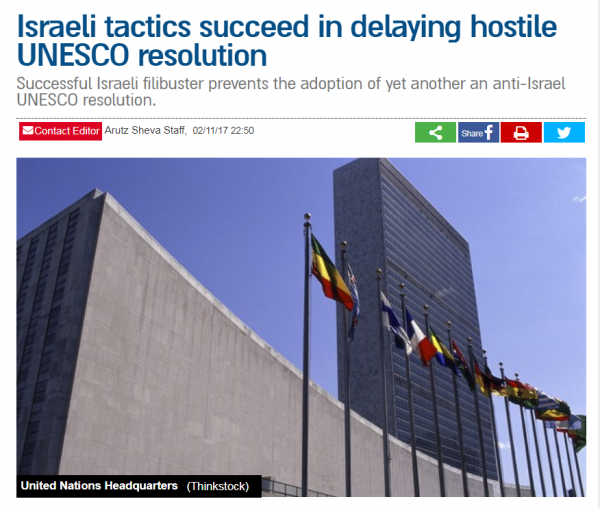 According to these reports, when the session opened, the Kenyan presiding chairman noted that the resolution would be approved without any debate or even a vote. But both the U.S. and Israel then insisted that the discussion of the resolution be postponed to the next session scheduled for 2019 (neither Israel nor the U.S. can vote because they’re no longer dues-paying members, but according to UNESCO rules they do have the right to request postponements on votes).

The Arab countries voiced their objections, but then Israel moved to vote on each of the resolution’s 11 articles.

The committee chairman and the Palestinian delegation preferred a simple show of hands, which would have meant a quick and “resounding Palestinian victory.” But the Israeli mission asked for a vote by name from each member-state, and the U.S. seconded the request—so this ate up a few hours with one country voting after another.

After this roll-call vote, Israel then objected to the Palestinian request not to hold a discussion, but to instead move immediately to approving the resolution. Once again, Israel appealed to UNESCO’s own regulations by insisting on another roll-call vote on whether or not to debate the resolution.

That second roll-call vote lasted more than an hour, and by then the Palestinians were “showing signs of nervousness” because it was getting close to 6 pm—the scheduled time for the meeting to wrap up.

The Ynet report claims that it was at this point when the deputy Palestinian envoy “lost his cool”, protesting that the Shama-HaCohen was “trying to take this plenum hostage. Don’t let him get away with this.”

But the chairman wasn’t prepared to rush the vote, which lasted until 7 pm.

By then it was too late. The meeting closed without a decision on account of Israel’s “pesky” and deliberate delaying tactics.

During the proceedings at UNESCO last Thursday China “surprised the conference” by abstaining on the Israeli delegation’s request for name voting, marking the first time that the country didn’t automatically support the Palestinians. Also unexpected was Mexico’s first-time vote in support of Israel (instead of abstaining).

Nothing was reported in the press as to China’s motivation for its abstention. But media reports attributed Mexico’s decision to Prime Minister Netanyahu’s successful recent visit and to an expression of gratitude for the assistance Israel gave in September by sending a humanitarian aid delegation to Mexico City after a devastating earthquake hit the country. (Israel reportedly organized the largest aid mission to Mexico, in addition to being the first country to arrive on the scene and the last to leave). 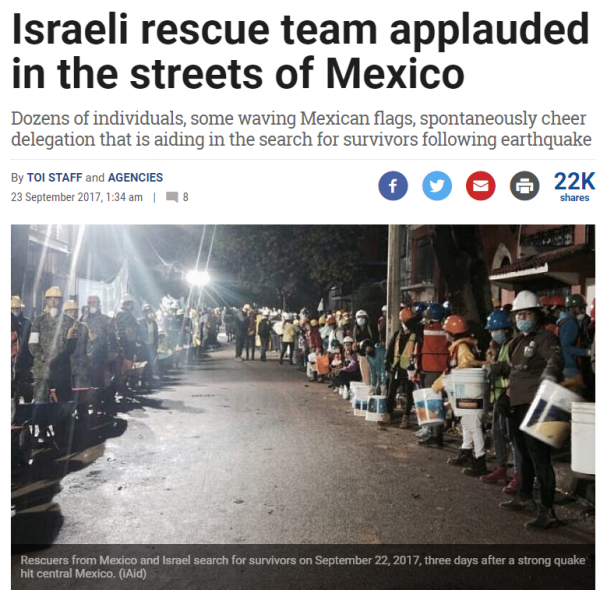 So Israel won the day.

Even though the Palestinian motion is bound to pass, the filibuster was still an important message of protest. As Shama-HaCohen put it:

We have made it clear that the days are over when anti-Israel resolutions can be passed in five minutes. The obsession against Israel will come with a price tag. The organization and world countries will need to devote dozens of hours, to add additional days for debate and to sit through long sessions. Maybe then they will start wondering whether it is worth their time invested in resolutions that are political, aimless, and have nothing to do with education, culture or science.

The filibuster communicates Israel’s message of protest effectively and, under certain circumstances, may lead to resolutions not being adopted. One thing is certain: these resolutions will cease being perceived as natural and obvious as the sun shining in the morning.”

Last Thursday’s delayed anti-Israel vote at UNESCO shows that filibusters and other sabotaging efforts may yield some temporary successes.

But these tactics are really only band-aids for what’s become a gaping wound.

Meaningful progress to stamp out the ingrained and horrible anti-Israel bias at UNESCO can really only happen if enough member-states commit to serious, deep reforms.

It is so refreshing to see israel having back-up. Thank you G-D.

It’s fitting to put the antisemitic UNESCO Islamist’s on record for the next time they come begging for Money from America!

Absolutely correct. In what was a stunning surprise to the organization’s bureaucrats the Obama administration was forced by a 1994 statute to cut off the funding of 22% of UNESCO’s budget after the body voted to admit Palestine as a “member state” in 2011. It was not the first time the US refused to fund UNESCO over political differences.

Why don;t we give another country an opportunity to host the UN? The UN has been in NYC long enough.

Why does Israel allow Arab occupiers to settle in the Golan Heights? That is not just crazy, it’s stupid.

Um, what are you talking about? What occupiers? The Golan Heights are part of Israel, and anyone who wants to can live there. No permits are needed, any more than you need a permit to live wherever you do.

Didn’t PDT withdraw from UNESCO due to it’s anti-Israel stances? Maybe this is another case of WINNING due to MAGA Trump!

No, he didn’t. He announced that the US will withdraw at the end of 2018. During that time he wants to negotiate Permanent Observer status instead. The thing is, 0bama stopped giving them any money six years ago, and in that time we’ve run up a half-billion-dollar “bill”, which of course we have no intention of ever paying. But if we want Permanent Observer status they’re going to want at least some of that money. So we’ll see what happens.

Reagan pulled the US out of UNESCO in 1984, but Bush Jr rejoined in 2003 after they implemented some reforms. Evidently those didn’t go far enough.

Let’s give credit where credit is due, the Obama administration stopped the funding because a 1994 statute required that action. I guess Obama could have ignored the law, but clearly the Congress would have objected, House members may have gone to court action to force compliance (Dingy Harry likely would not have allowed statutory force to be applied) and he knew he was up for re-election in 2012.