The resolution was passed as Item 25 (titled “Occupied Palestine”) of the provisional agenda for UNESCO Executive Board’s 200th session.

The document (full text here) was advanced by the Palestinians along with Egypt, Algeria, Morocco, Lebanon, Oman, Qatar, and Sudan. Twenty-four countries voted in favor of the resolution; 26 abstained; and only 6 voted against according to media reports.

Those that voted against include: U.S., Britain, Germany, the Netherlands, Lithuania and Estonia. 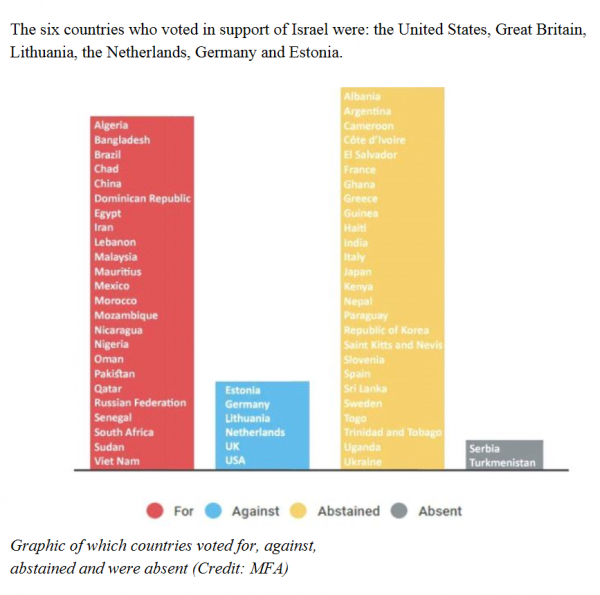 Israeli diplomatic efforts in advance of the vote—which included the dissemination to UNESCO member states of an 8-page brochure (see several images from the brochure below) documenting the unique, deep, and unbroken attachment of the Jewish people to Jerusalem for over 3,000 years—reportedly were successful in ensuring that no European country backed the motion. 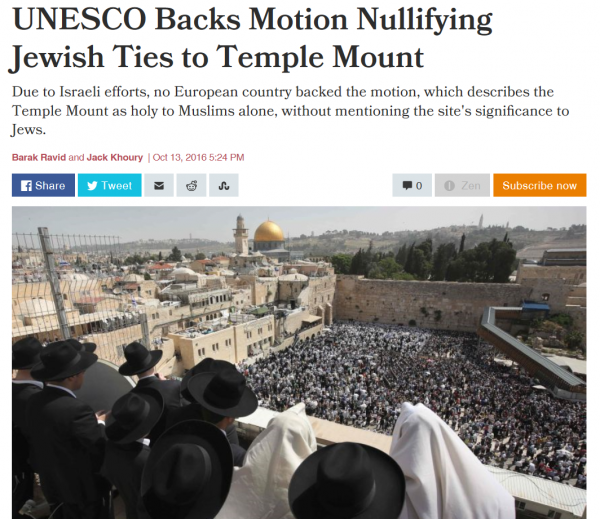 That decision by European members might also have been influenced by an October 10 bipartisan and bicameral U.S. congressional letter to UNESCO urging “Do Not Rewrite Jerusalem’s History”. 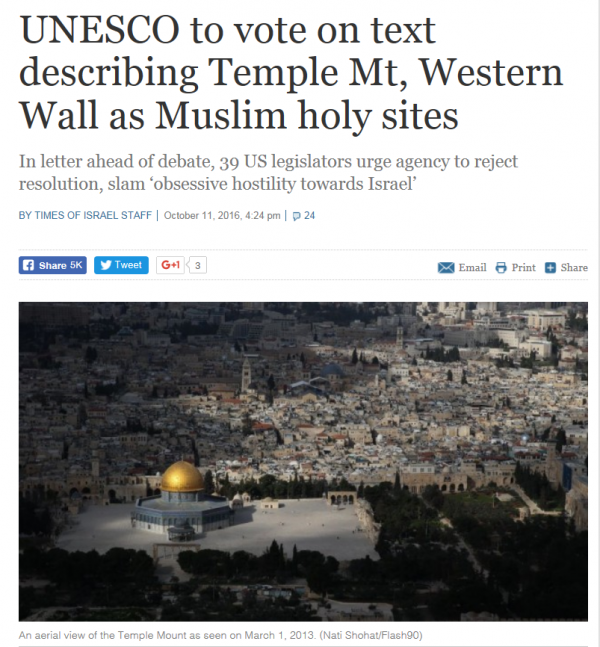 In their released statements, Rep. Ileana Ros-Lehtinen and Sen. Ted Cruz, who initiated the congressional letter (subsequently signed by an additional 39 U.S. lawmakers), called the resolution “irresponsible and reprehensible.” Further they noted that it would undermine Jerusalem’s status as “the capital of the Jewish state” and

diminish the historic and verified Jewish and Christian ties to the Old City of Jerusalem in an effort to delegitimize Israel.”

The resolution had been postponed at a July meeting of UNESCO’s Board in Istanbul (see our earlier post). The most astonishing aspect of the document is that it references the Temple Mount—Har HaBayit—only by its Muslim names and describes the site as holy only to Muslims, without even mentioning its significance to Judaism.

The resolution concedes that Jerusalem is holy to “three monotheistic religions”. However, it’s the special section dealing with the Temple Mount that’s egregious. In it, the site is referred to as sacred only to Muslims. There’s no recognition whatsoever that it is also a site sacred to Jews. The resolution also calls the Western/Wailing Wall (the Kotel) plaza by its Arab-Muslim name—al-Buraq plaza. The Jewish-Hebrew name for the Kotel appears with quotation marks, thereby even casting doubt on the link between Judaism and the Wailing Wall.

Additionally, the resolution “strongly condemns escalating Israeli aggressions” on the Temple Mount and “illegal measures…against the freedom of worship and Muslims’ access to their Holy Site Al-Aqsa Mosque/Al-Haram Al-Sharif.”

Describing the Temple Mount, the holiest site in Judaism, exclusively as a Muslim holy site is an offensive affront to all the world’s Jews. But it’s important to note that the text of the resolution is actually a toned-down version of the even more virulently anti-Israel and anti-Jewish one that was up for discussion in Istanbul. In that prior document, the Western Wall’s Jewish-Hebrew name wasn’t even mentioned at all.

In the hostile place to Israel and Jews that is UNESCO, that’s what is supposed to be called progress.

Reactions to the Resolution

Israeli politicians across the political spectrum took to the air waves to deplore the resolution.

PM Netanyahu slammed the vote on his Facebook page stating,

The theater of the absurd continues at the UN…What’s next? A UNESCO decision denying the connection between peanut butter and jelly? Batman and Robin? Rock and roll?”

UNESCO betray their mission…I urge UNESCO to withdraw this bizarre resolution and to engage in protecting, not distorting, human history.”

Likening the decision as akin to claiming that “Catholics have no connection to the Vatican or Muslims to the Kabaa in Mecca”, Knesset Member Micki Levy (Yesh Atid) similarly called the decision “absurd” and went one step further by categorizing it as “anti-Semitic.”

This #UNESCO resolution is an affront to the truth and a crude attempt to delegitimize the Jewish state. https://t.co/qO91yi4nH6

This goes beyond left and right. Everyone from AIPAC to T'ruah can see this as a boldly anti-semitic attempt to erase Jewish history. https://t.co/usm3wXt1rI

Speaking to the Jerusalem Post, a senior Obama administration official called the resolution “unhelpful”, “one-sided” and “highly politicized.”   At the time of this writing, however, the White House had not responded.

Take-Away Lessons from the UNESCO Vote

There are three take-home lessons from this latest United Nation’s affront to Israel and world Jewry:

Along with the shift of position of key countries such as India and Argentina to abstention, the vote constitutes a significant achievement [for Israel] compared to the opening conditions for prior votes.”

Palestinian denial and denigration of Jewish attachment to the Holy Land and Jerusalem is an ingrained part of their anti-Israel narrative. But that doesn’t mean everyone else is simply going to go along with this.

The #UNESCO anti-Semitic #Jerusalem vote is a disgrace. But the world is also catching on to the #Palestinian goal. https://t.co/UqYQGu7qrE

Indeed, the UN members who refused to support the resolution are now indicating their basic agreement with Israel’s position: inventing foolish fantasies that the Western Wall and Temple Mount have no connection to the Jewish people aren’t just shameful efforts to rewrite history, they’re also displays of religious intolerance that lead to anti-Jewish hatred, and violent incitement.

So those who voted ‘no’ (or abstained) in effect rejected the resolution’s outrageous attempt to lay the blame for the recent wave of Palestinian knifings, car rammings, and shootings on Israel rather than on the Palestinian Authority and Hamas. As we’ve noted in numerous posts over the last year, it’s Palestinian religious and lay leaders who incessantly stoke terrorism via wild and false assertions that the Muslim mosques are in danger from Jews, and must be protected. 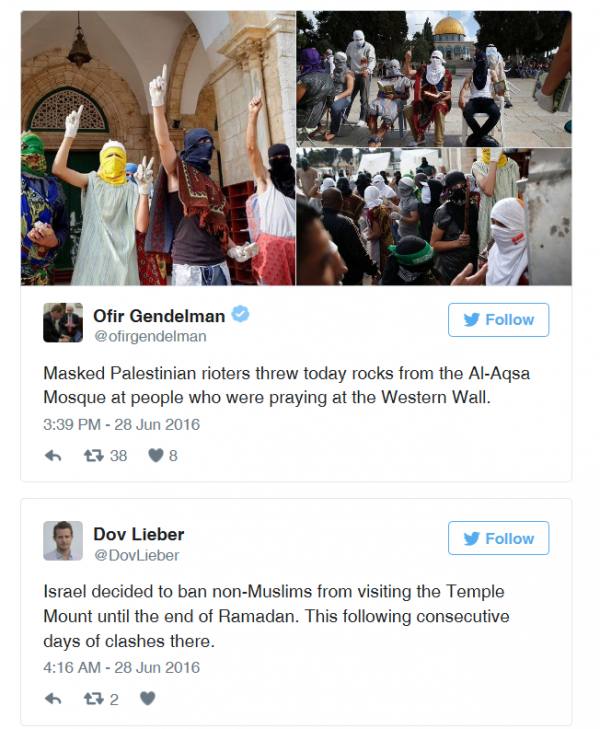 Now, a fair number of UN member states—including some of the Palestinians’ most important backers—are basically saying that they won’t sign on to a document that fails to recognize Palestinian culpability for the absence of peace.

A number of Arab missions to UNESCO which signed the resolution reportedly told Israel’s Foreign Ministry that, while they’re “considerably dissatisfied with the Palestinians’ moves” in that UN body, they have no choice but to lend their support to obsessively hostile documents out of “domestic political considerations”.

Any country that votes for a resolution denying Jews' connection to their holiest site should be named and shamed. https://t.co/p8hTlyudsX

Apparently, concerns about public opinion are salient enough to override other considerations, including the long-term health and viability of the organization, since such resolutions are among the reasons for America’s continued suspension of its UNESCO membership fees in 2011. As noted in in yesterday’s Jerusalem Post editorial,

No one with intellectual honesty seriously doubts that the Jewish people has religious, cultural and historical ties to the Land of Israel. Any attempt to deny these ties is a perversion of science. That UNESCO is lending its hand to such perversion is a tragic testimony to the sorrowful state of UN institutions.”

The reality, as we’ve discussed in multiple prior posts (see here, here and here), is that it’s Jews—and not Muslims—who are prevented from enjoying free access and freedom of worship on the Temple Mount.

While Muslims can come and go as they like and do anything they wish to do there—including turning the Al-Aqsa mosque into a war zone—non-Muslim entry to the site is frequently banned by Israeli courts and the police, ironically in order not to offend Muslim sensibilities or provoke violence. 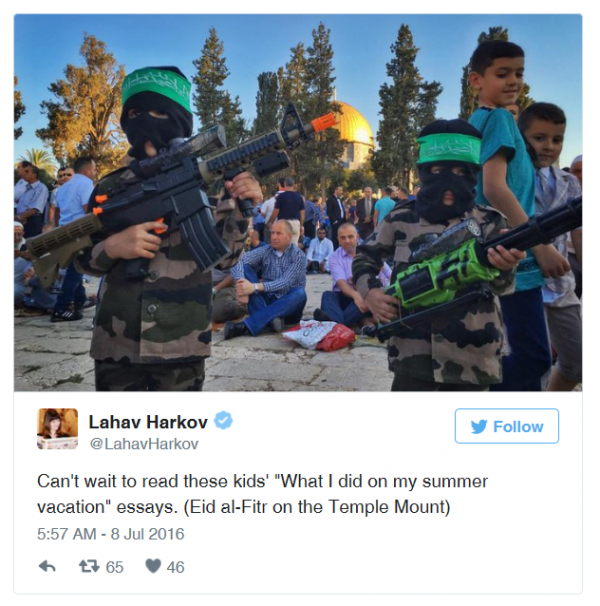 International law and basic human decency requires that people of all faiths have the right to peacefully visit and pray at their holy places. Yet these days Jews who just want the chance to tour and mumble a few prayers on the sacred Har HaBayit are routinely subjected to death threats, and degrading and absurd humiliations. Even those UNESCO members that didn’t support today’s resolution probably don’t know anything about that. It’s time that they did.

Yesterday UNESCO—one of the most anti-Israel organizations on the planet—didn’t only repudiate the basic facts of Jewish history, it also denied Jews their human rights. Tragically, it also failed to advance the cause of the Palestinians—the people it claims to care so much about. That’s because a just and lasting peace will remain elusive until such time when Jews can freely worship at their holy places and the Palestinians and the Arab-Muslim world no longer deny the Jewish people’s connection to their heritage. Instead of advancing this sine qua non for peace, UNESCO’s decision yesterday merely proves that its part of the problem—not the solution.

[For more on the archeological findings that provide the historical affiliation between Jews and Jerusalem, including the existence of the Temple Mount at the site where the Al-Aqsa Mosque stands today, see Israel’s Ministry of Foreign Affairs brochure (several images reproduced below). See also the pamphlet “Jerusalem: 10 Essential Facts” produced recently by the organization StandWithUs]. 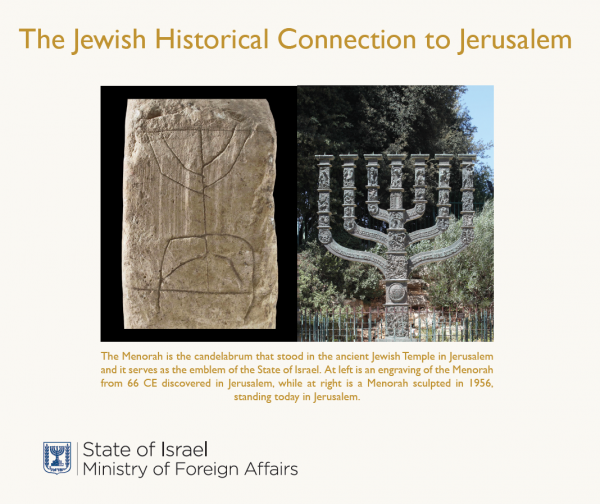 Miriam F. Elman is an associate professor of political science at the Maxwell School of Citizenship & Public Affairs, Syracuse University where she was recently appointed the Robert D. McClure Professor of Teaching Excellence. She is co-editor of Jerusalem: Conflict and Cooperation in a Contested City, published by Syracuse University Press. Follow her on Twitter @MiriamElman

Well, if the Arab world believes Israel is trying to take over the Temple Mount then perhaps Israel should just make their dream come true and just take it over?

Ah.. the menorah on the left has 5 candles and the one on the right has 7 candles. Are we sure they are the same thing?

Perhaps UNESCO should also create a committee to edit The Arch of Titus in Rome? After all, the Arch commemorates the Roman siege of Jerusalem in 70 CE, and some of the images on it look remarkably like artifacts of Jewish religious observance.

Or perhaps they could just order that they be covered with cloth or something, as Romans obviously could not have found Jewish artifacts in the Jerusalem in 70 CE if there were no Jews and no Temple there.

Is there anything even slightly right about the UN? The UN is so useless that I won’t even drink the uncola.

Doesn’t UNESCO create or keep a list or something of World Heritage Sites. Please explain what the Western Wall is and how it was built if not for Jews. One more reason we need to get the UN out of the US and the US out of the UN.