Denial of history another instance of anti-Israel bias turning into antisemitism.

Wrapping up its session in Paris that began several weeks ago, yesterday the United Nation’s cultural agency adopted a Palestinian and Arab state-sponsored resolution on Jerusalem that ignores both Jewish and Christian attachments to Jerusalem’s sacred sites.

As we noted in a recent post, the resolution had already passed on October 13 at the committee stage when 24 UNESCO member states supported the measure (6 states, including the U.S., voted against; 26 abstained; and 2 state missions were absent for last week’s vote).

Yesterday’s approval vote was identical to last Thursday’s—except that Mexico moved its vote from a ‘yes’ to an abstention.

Since last Thursday, Israel had reportedly made last-ditch efforts to delay the motion’s final passage.

The UNESCO mission in Paris even received permission from the Foreign Ministry to work during the High Holiday of Sukkot this Monday and Tuesday—a time when Israel’s diplomatic missions around the world are typically closed in observance of the festival.

The lobbying efforts appeared to be paying off. A postponement of the vote was looking increasingly possible.

The director-general of UNESCO, Irina Bokova, publicly signaled her dismay and opposition to the motion. She spoke of the importance of honoring the long religious and historical connection that Judaism, Islam and Christianity have to the site:

The heritage of Jerusalem is indivisible, and each of its communities has a right to the explicit recognition of their history and relationship with the city.”

Bokova’s harsh rebuke was followed by Michael Worbs, head of UNESCO’s executive board, expressing a hope that the resolution would be deferred in order to ‘give dialogue a chance’. Worbs, reportedly apologetic for the vote and disappointed with the high number of abstentions, wanted to see if the text could be revised so that a consensus could be reached among all 58 executive board members. 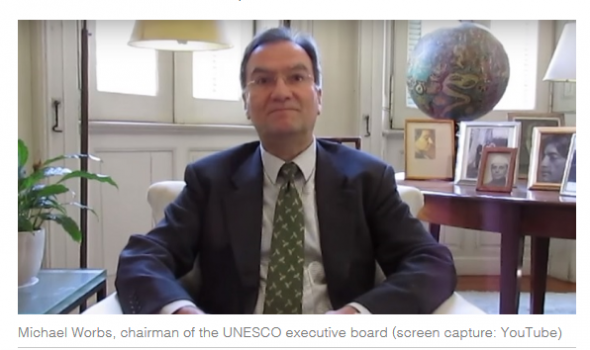 Then, in a surprise move, Mexico—which had originally supported the resolution—announced that it had a change of heart and wanted to alter its position to an abstention. Mexico was reportedly working to utilize a provision that would allow for a revote. This came after Andres Roemer, Mexico’s ambassador to UNESCO, walked out of Thursday’s committee session in protest and considered resigning. 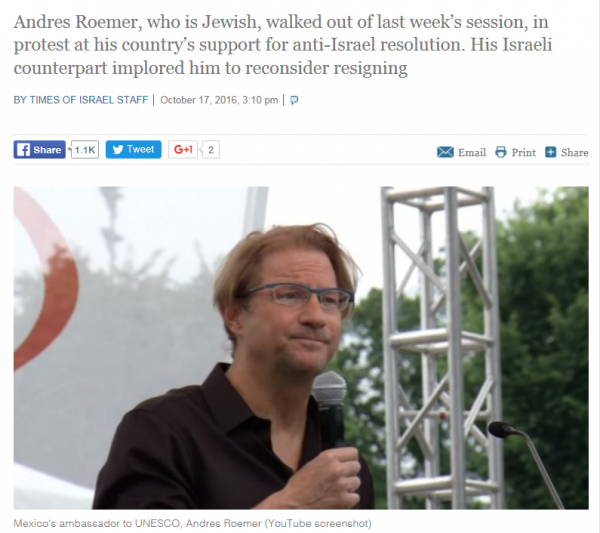 So given the outrage and world-wide condemnation of the resolution last week, Israel had expected that a number of countries would request a delay in voting on it.

In the end though, Roemer (who is Jewish) was fired from his post. Mexico ended up backing away from its initial intention to call for a new vote (apparently caving in to pressure from UNESCO’s Arab bloc, but also from Western states which were concerned over the precedent that a revote would set). Worbs also ultimately chickened out—he recused himself from the proceedings, letting one of his deputies handle it.

A Silver Lining and a Small Step Forward

Hamas and the Palestinian Authority are now crowing over their perceived “historic and strategic victory for the Palestinians” which proved that “Jews have no historical ties to Jerusalem.”

But Israel hasn’t come out of this latest disgraceful UN decision empty-handed.

As we stated in our prior post, the ‘offensive and infuriating’ UNESCO decision had a silver lining: while only six states voted against the document, no European state backed it. Other states that had previously supported similar anti-Israel and anti-Jewish resolutions in the past abstained this time around.

Now Mexico and Brazil too are expressing reservations over the language of the resolution. In upcoming votes (there’s another similarly egregiously-worded Jerusalem resolution scheduled to come before UNESCO’s 21-member World Heritage Committee on October 26), it’s a good indication that they’re not likely to be supportive.

According to Israel’s Ambassador to UNESCO Carmel Shama HaCohen, other member states are also beginning to “lose patience” with motions that simply “tarnish UNESCO’s professional reputation.” Of course, don’t expect a rush of countries there to suddenly become Israel-friendly any time soon. But it’s still progress given the traditional automatic majority that the Palestinians have long come to expect at the UN.

This week’s nasty madness from the UN also marks a small step forward for those fighting for Jewish religious freedom rights on the Temple Mount.

As we’ve highlighted in numerous posts (see here, here, and here), in order not to provoke violence by offending Muslim sensibilities, Jews are often barred from the site and those that do manage to tour the place are routinely harassed, and subjected to a bizarre set of rules and restrictions. The experience—if it happens at all—is often a demeaning and degrading one. Still, Israel hasn’t been looking to change this profoundly illiberal ‘status quo arrangement’ which runs roughshod over its own citizens’ liberties. 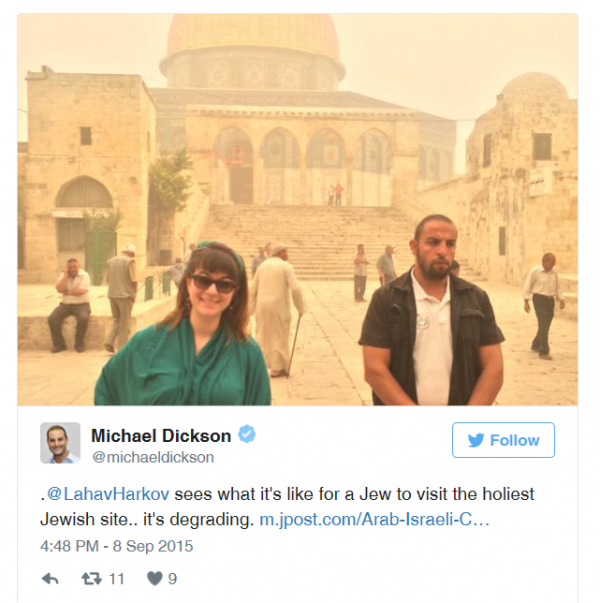 But if the Palestinians and their supporters are so eager to erase what’s written in the Bible, in the history books, and in the archeological record, and even resort to making deaths threats against those who would criticize and distance themselves from such moves, then maybe the time has come to revisit this thinking.

This past week, the world’s major Jewish organizations joined with leaders across Israel’s political spectrum to reaffirm the Jewish people’s connection to the holy city of Jerusalem and the sacred Temple Mount. 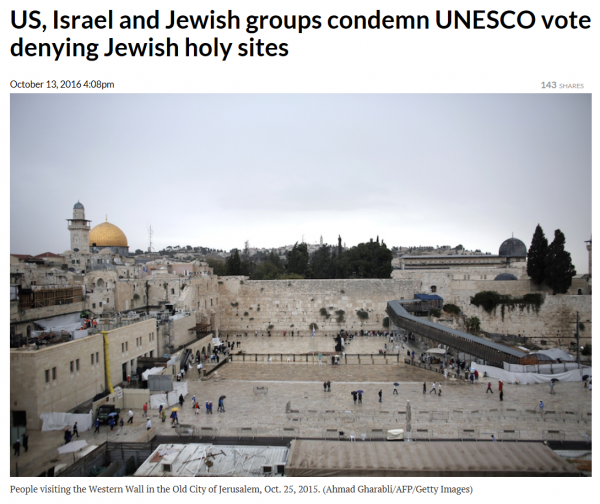 The good thing about the #UNESCO resolution is that it got Israeli representives speaking on the Jewish claim to the Temple Mount. pic.twitter.com/FqJb1PvSJ8

It’s a renewed level of interest and support that may just make it possible for a few more Jewish families to peacefully visit the holiest site to Judaism. 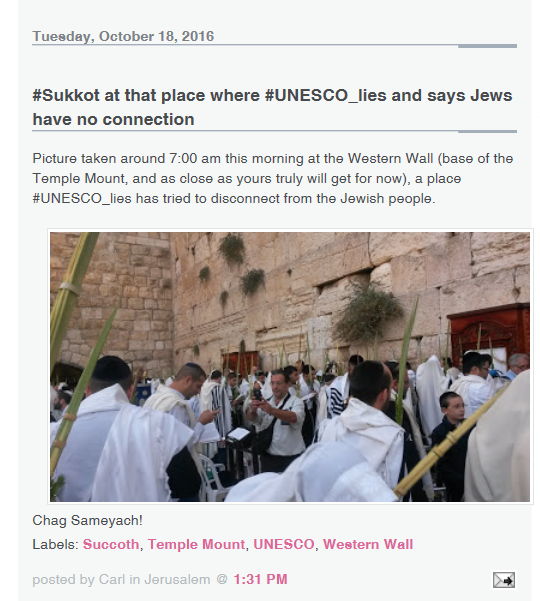 Here’s a few photos of the Jews that UNESCO yesterday “strongly condemned” for their “continuous storming of Al-Aqsa Mosque/Al-Haram Al-Sharif”:

Dear #UNESCO visiting the Temple Mount during Sukkot is a religious requirement for #Jews. pic.twitter.com/WkC0dKoLOm

Miriam F. Elman is an associate professor of political science at the Maxwell School of Citizenship & Public Affairs, Syracuse University where she was recently appointed the Robert D. McClure Professor of Teaching Excellence. She is co-editor of Jerusalem: Conflict and Cooperation in a Contested City, published by Syracuse University Press. Follow her on Twitter @MiriamElman

Given an infinite amount of time and an almost infinite number of carved stones, I am sure that wall could have assembled itself.

The Arab/’Palestinian’/Islamist community known as the ‘United Nations’ has never done anything for Israel, except continue to demand Jews just walk away into the sea.

The document is simply a piece of paper with no force of law or military backing. In other words, like everything else that comes out of Turtle Bay – YAPOS (Yet Another Piece of …t)

I would say UNESCO has jumped the shark, but they did that long ago. In fact, it’s a close call as to who was first to do it, them or Fonzie.

It is also an exhibition of the Muslim hatred of, and intent to destroy, history and civilization.

Like Gay-Marriage, just because the ruling elites proclaim it doesn’t make it so.

The way I see it, given its long and sordid history of fallacious and hypocritical anti-Semitic, anti-Israel resolutions and critiques, most of the U.N. member-states are now totally unabashed in acting as actors advancing the cause of Islamic supremacism and fascism. This is considered the de rigeur, mainstream diplomatic posture at the U.N., today.

Now, obviously, this posture is to be expected from the Arab and Islamic states, but, what’s utterly depressing is how many non-Islamic state actors now dependably sign on board with this despicable and morally repugnant agenda.

could this somehow be a step to make it easier for israel to build the new temple on the true temple mount, a few hundred yards from this one?