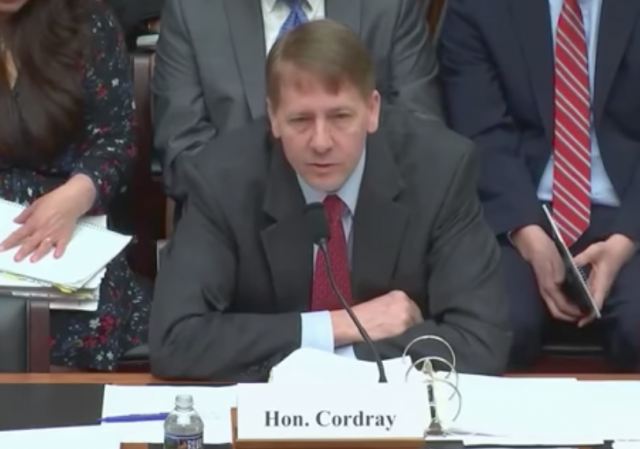 Richard Cordray, an Obama appointee and head of the Consumer Financial Protection Bureau (CFPB) announced to staff in an email Wednesday his plans to resign. While he’s yet to confirm his plans, there’s speculation Cordray will return home to run for Ohio’s governorship.

The CFPB functions as, “a regulator set up in response to the 2008 financial crisis to police mortgages, credit cards and other financial products,” and was the brainchild of Massachusetts Democrat Senator Elizabeth Warren.

Unlike other agencies, due to the unique circumstanced through which the CFPB was created (was part of Dodd-Frank in 2010), Cordray answered to no one. As the bureau’s director, Cordray controlled the budget (other federal entities are subject to Congressional budget allocation), and was subject to no term limits.

“We are long overdue for new leadership at the CFPB, a rouge agency that has done more the hurt consumers than help them. The extreme overregulation it imposes on our economy leads to higher costs and less access to financial products and services, particularly for Americans with lower incomes,” said House Financial Services Chairman Jeb Hensarling, a Republican from Texas.

A chorus of right-leaning organizations, groups, and lawmakers have been calling for Cordray’s resignation for months, in addition to pressuring Trump to can him. Cordray, they claim, used the CFPB not to protect consumers, but as his own personal policy machine.

In 2015, emails revealed the CFPB (under Cordray’s tutelage) collaborated with the Center for Responsible Lending (a left-leaning non-profit) to draft payday lending rules.

Since Trump won the 2016 election, Cordray has used his time as agency head to promote like-minded individuals and create rules that favor Democrat campaigns, including a $43 million payout to a liberal advocacy group that created ads for both the Obama and Hillary campaign.

From The Weekly Standard:

Cordray had pushed CFPB attorneys to complete a rule banning contracts that force consumers to resolve disputes through arbitration rather than class-action lawsuits, a gift to big Democratic donors in the plaintiff’s bar. To avoid the White House’s attention, the director held back the finished rule for weeks, quietly promoting partisan employees and buying time to complete two other important Democratic goals.

The first was a huge payout to GMMB, the liberal advocacy group that created ads for the Obama and Hillary Clinton presidential campaigns, and the sole recipient of the CFPB’s $43 million advertising expenditure since 2013. On June 30, the bureau awarded GMMB a $14.79 million contract for the new fiscal year. Ten days later, the CFPB announced the arbitration rule.

Needless to say, Cordray will not be missed by Republicans, or anyone interested in actual consumer protections.

“Today is welcome news for all consumers as Richard Cordray will no longer be able to misuse the Consumer Financial Protection Bureau’s (CFPB) unchecked power and resources to reward his liberal donors and friends. Under his direction, the CFPB has issued thousands of pages of crushing regulations, some of which have irreparably harmed consumers, and crippled American businesses. If Director Cordray decides to run for Governor, which is highly anticipated, the people of Ohio should be wary of his crony behavior and reject his candidacy outright.”

With Cordray out, Trump has an opportunity to erase Elizabeth Warren’s legacy of leveraging federal agency and dollars over the interests of the people. Good bye, and good riddance.

While we’re at it, can we get the CFPB budget hauled back into the regular budget and nailed to it, so no future president can pry it loose into unaccountability.

and set a 1 time term limit – meaning approved for x# years then out period.

really time to start draining the swamp agency by agency,

Wake me when it actually happens.

“…and create rules that favor Democrat campaigns, including a $43 million payout to a liberal advocacy group that created ads for both the Obama and Hillary campaign.”

I read an article today that detailed how Congress has settled out of court multiple sexual harassment lawsuits totalling $15 million during the previous decade. That money is from the tax payers. Why do tax payers have to pay for these pervert predilictions in Congress??

And now we learn that this regulatory inquisitor Cordray had authority to funnel $43 million for Obama and Hillary campaign ads??

Why the h3ll isn’t this crap illegal, or at least prohibited by policy, already?!

This greedy money corrupt bureaucracy pisses away more $$$ to benefit their cronies before 9 AM, than most people earn in 4 lifetimes!! This is why voters despise these people and cheer at least some of the brush cutting which Trump has done to the bureaucracy.

“With Cordray out, Trump has an opportunity to erase Elizabeth Warren’s legacy of leveraging federal agency and dollars over the interests of the people. Good bye, and good riddance.”

Uh, no. Congress needs to eliminate the CFPB! But I won’t hold my breath for these despicable dirtbags to accomplish that task.

notamemberofanyorganizedpolicital in reply to Halcyon Daze. | November 15, 2017 at 6:10 pm

CFPB needs to be eliminated.

It serves no purpose other than a conduit for unaccountable leftist bureaucrats to abuse power and harass banks and financial institutions.

Critical oversight functions within CFPB are all covered by other agencies. There is no reason for CFPB to exist.

I’m already hearing calls to reform the CFPB. There’s no acceptable outcome except its dissolution.

““We are long overdue for new leadership at the CFPB, a rouge agency that has done more the hurt consumers than help them.”

Those rouge agencies are a plague!! I much prefer the blue ones.

Seems to be a fairly common problem. Don’t know whether people don’t know the difference, or autocompletion/spell check doesn’t.

Given this, how does it still exist?

Trump should just use THIS as his justification for abolishing the entire CFPB:

Oh, and while we’re on the subject: Congress should have already repealed the Dodd/Frank Financial Strangulation law in its entirety.

Do they have any idea why we voted for them?

Dissolve the CFPB and be done with it. It was supposed to protect the consumer but it ended up protecting the DemocRATs. Just like everything else has for the past 8 years. #DRAINTHESWAMP.

I have this recollection that there is an email floating around about how Cordray outfoxed the Trump people by making them believe that he was going to resign, so they didn’t try to fire him in January.

Consumer Financial Protection Bureau Director Richard Cordray on Friday appointed the agency’s chief of staff, Leandra English, as the CFPB’s deputy director, establishing her as his successor when he steps down at the end of the day.

The move appears designed to thwart any move by President Donald Trump to name another temporary official to head the controversial agency. Trump has been reported to be considering White House Budget Director Mick Mulvaney for the role.